The leaders of Serbia and Kosovo begin the ‘very difficult’ process aimed at resolving their territorial dispute. 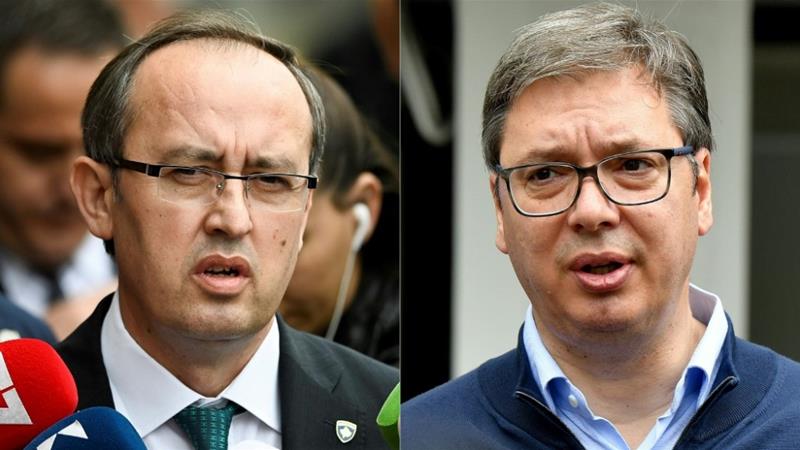 The leaders of Serbia and semi-autonomous Kosovo have held their first talks in 18 months on resolving one of Europe’s most intractable territorial disputes, agreeing to a face-to-face meeting next week on the “very difficult” process.

These discussions will be followed by more online talks on Sunday between Hoti and Vucic as well as European Union officials, and a meeting in Brussels on Thursday, a French presidential official said after the talks.

“There are very difficult perspectives for the outcome of this dialogue, but there is a commitment by everyone to proceed step by step,” said the official, who asked not to be named.

Serbia has refused to recognise Kosovo’s unilateral declaration of independence after the province broke away in the bloody 1998-1999 war that was ended only by a NATO bombing campaign against Serbian troops.

But Kosovo and Serbia have been facing mounting pressure from the West to reboot negotiations, where resolving the impasse is seen as crucial for Belgrade’s bid to join the EU.

The new push comes after Kosovo’s President Hashim Thaci was charged last month with war crimes by prosecutors in The Hague.

Hoti told the online summit the normalisation of relations “can be achieved only if Kosovo and Serbia respect each other’s statehood”.

“We believe that the dialogue has no alternative. We are ready and committed to engage on the Kosovo-Serbia dialogue on an equal footing.”

More than 13,000 people died in the war, mostly Kosovar Albanians, who form a majority in the former province.

Kosovo is now recognised by more than 100 other states but the EU is not unified on the issue, with 22 out of the 27 bloc members recognising its independence.

The French presidential source said territorial exchanges were not part of the talks.

Vucic, who is facing a significant crisis at home after protests over a new coronavirus lockdown in Serbia, warned before the talks he did not expect a smooth ride.

“No one is going to cuddle us or give us a present. On the contrary, we will be pressured to give in. It is not going to be easy,” he said.

A summit held in Berlin in April 2019 had already failed to restart the talks. But the EU appears newly determined to get the process on track again.

Thaci’s indictment led to the postponement of a White House summit between Serbia and Kosovo due to be held at the end of June.

European officials had bristled at the US initiative, and the new talks are seen as a chance for the bloc to show it still is capable of resolving the conflict.

The French official acknowledged that this issue was a “test of European leadership”, adding that the meeting on Friday had shown that the Europeans were taking the lead.

During the war, Thaci was the political leader of the Kosovo Liberation Army (KLA), but prosecutors in The Hague suspect him of being behind nearly 100 murders, as well as numerous cases of persecution and torture.

Thaci, who has denied the charges, has said he would be interviewed by prosecutors in The Hague next week.