Residents of Selma have criticised moves to rename the bridge where voting rights marchers were beaten in 1965. 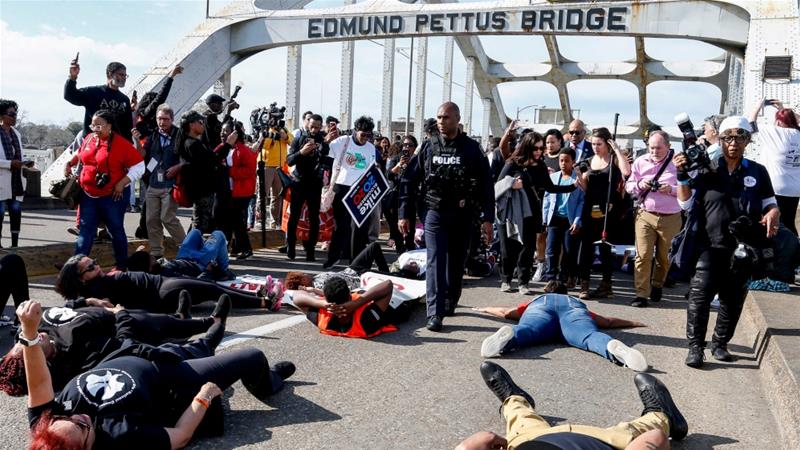 Thousands gathered in Selma, Alabama, a United States river city in 1940 to dedicate a new bridge in honour of white supremacist Edmund Pettus, a Confederate general and reputed Ku Klux Klan leader. Just 25 years later, the bridge became a global landmark when civil rights marchers were beaten at its base.

Today, with tens of thousands protesting nationwide against racial injustice, a years-old push is gaining steam to rename the Edmund Pettus Bridge in honour of Representative John Lewis, who led the 1965 marchers on what became known as “Bloody Sunday”. But the idea is drawing opposition in Selma, including from some who marched with Lewis on that day.

Pettus’s name has ironically come to also symbolise Black freedom and should not be painted over, some say. Others oppose the move because Lewis was an outsider who followed in the footsteps of locals who had worked to end segregation for years before he arrived. Still, others fear a change would hurt tourism in a poor town with little going for it other than its civil rights history.

Lynda Lowery, who was 14 at the time and received 35 stitches in her head on Bloody Sunday, does not want the bridge renamed for anyone. She said the span over the muddy Alabama River “isn’t a monument, it’s a part of history”.

“They need to leave my bridge alone,” said 70-year-old Lowery. 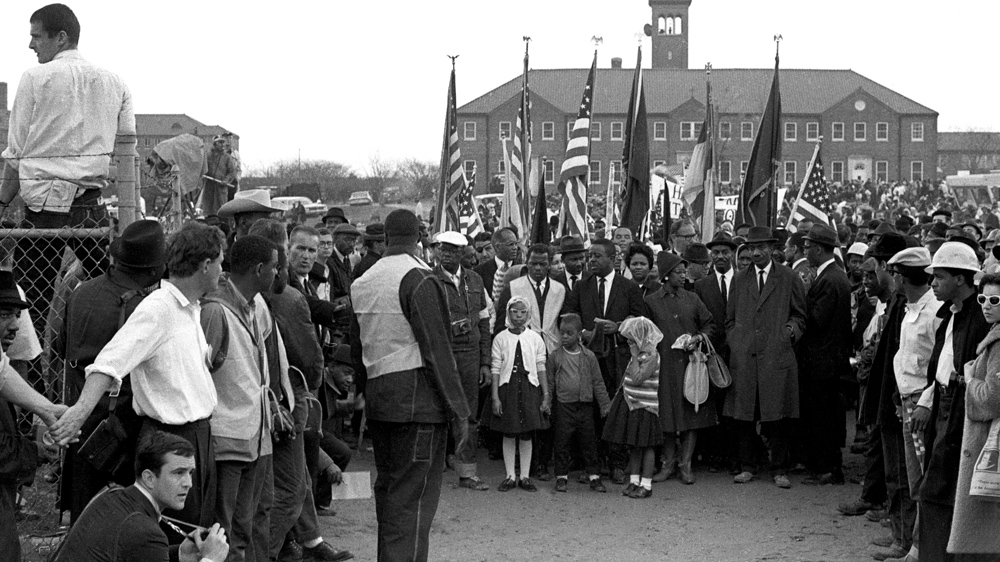 Lowery’s younger sister, Jo Ann Bland, who also was among the estimated 600 marchers on March 7, 1965, long opposed renaming the bridge. But amid widespread demonstrations since the police killing of George Floyd in Minnesota, she now tentatively supports renaming the span for local “foot soldiers”, not Lewis.

“John Lewis is my hero; he’s been my hero since I was a child,” said Bland. “I followed him up on that Edmund Pettus Bridge. But I and John were not the only ones there.”

The bridge was named for Pettus, who fought for the Confederacy and was a reputed KKK grand wizard who served in the US Senate at a time when Jim Crow laws gave white people near-total control in Alabama. He died in 1907.

On the day of the 1940 bridge dedication, which some 7,000 attended, a parade included a float depicting slaves. The town newspaper printed a laudatory biography which said Pettus was “devoted wholly to the upbuilding of our state and the bringing of order out of the chaos of carpetbaggery and negro dominance” after the Civil War.

Online petitions to rename the bridge have been around since at least 2015, the year then-President Barack Obama and former President George W Bush visited Selma to mark the 50th anniversary of Bloody Sunday, when state troopers beat voting rights marchers as they crossed the bridge on the way to Montgomery, the capital.

Lewis, a native of southeast Alabama, was at the front of the long column and was badly injured. Hospitalised briefly, he went on to a career in politics and has represented Atlanta in Congress since 1987. 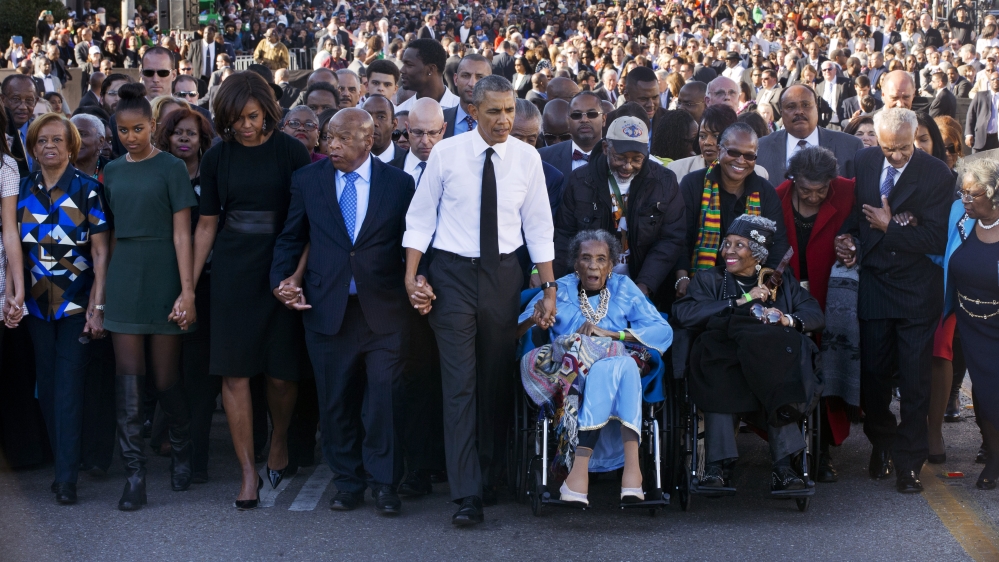 In 2015, Lewis and Democratic US Representative Terri Sewell, the lone African American in Alabama’s congressional delegation, co-authored an opinion piece opposing any change to the bridge’s name.

“Changing the name of the Bridge would compromise the historical integrity of the voting rights movement,” they said.

But much has changed since then. Lewis was diagnosed with advanced pancreatic cancer in December, and the drive to eradicate Confederate symbols gained momentum after Floyd’s death; multiple rebel monuments have come down since.

With one online petition to rename the bridge for Lewis gaining more than 285,000 signatures, Sewell recently said she had changed her mind and now supports removing Pettus’s name. Sewell, who is from Selma, personally favours renaming the bridge for Lewis but said the decision should be up to the town’s people.

“While I believe the historical significance of the bridge transcends the man for which it was named, I also acknowledge that in this moment everything must be on the table, and that includes renaming the bridge,” Sewell said in a statement.

An aide to Lewis did not respond to requests for comment.

Southern heritage groups oppose the removal of any rebel reminder, and a Facebook group for Selma residents has had spirited debates on the topic. AC Reeves, who is white and conducts tours in the city, said the surviving veterans of the Selma civil rights movement should make the decision.

“I think white people should just shut up about it,” she said.

Alabama’s Legislature, controlled by white Republicans, would have to approve any change, said Tony Harris, a state transportation agency spokesman.

The Alabama House killed a 2015 resolution that would have allowed the bridge to be renamed; the former state senator who sponsored that measure, Hank Sanders, now wants to rename the span, The Bridge to Freedom, rather than for Lewis.

While conservative Republicans may hesitate to rename the bridge in a mostly white state where President Donald Trump is overwhelmingly popular among GOP voters, each side of the renaming debate appears to have biracial support in Selma, a town of roughly 17,000 that is more than 80 percent Black.

Local leaders see tourism as a way to bring new money into Selma, where 41 percent of residents live in poverty and large employers are scarce, and they are concerned that changing the bridge’s name might give people one less reason to visit the town.

“The bridge is a huge piece of the tourism industry here in the city of Selma, so it’s really important that we also consider the potential economic impact that changing the name could have,” said Lydia Chatmon, who is Black and works with a group promoting tourism.

Bland also worries about the effect on tourism and doubts anything will happen quickly. That ia OK, she said, given that there is something delicious in how the name of a white supremacist has come to symbolise freedom for Black people, who still cross the old bridge each year to commemorate the events of 1965.

“What happened on that bridge changed the whole meaning of the Edmund Pettus Bridge, of Edmund Pettus to me,” Bland said. “I bet he’s rolling in his grave every time we walk across that bridge.”