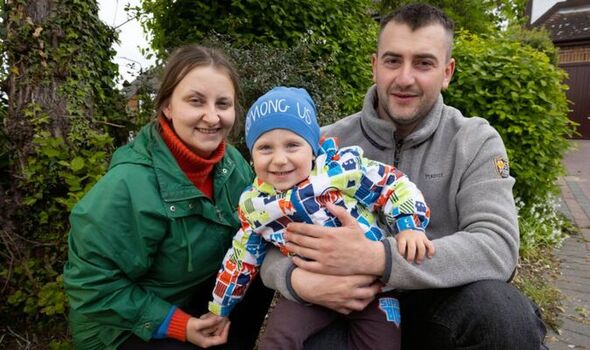 They also gave heartfelt gratitude to the people of Britain and Prime Minister Boris Johnson for doing so much to help their country in its hour of need.

Roman Bezsonov, 34, his wife Iryna, 33, and their two-year-old son Erik made it as far as Turkey before they ran out of money.

This newspaper stepped in to provide the flights they needed to complete their journey.

The family, who worry for family left behind, had been granted refugee visas five weeks after applying thanks to the efforts of British lawyer Helen Peach, who had agreed to sponsor them at her home in Chatham, Kent.

Roman told how within days of leaving their own apartment in Kyiv, missiles were exploding close to the building.

He said: “We heard Putin’s speech a few days before he invaded. It was crazy. I realised he was going to try to take all of our country, that nowhere would be safe. Iryna and I talked about nothing else and we decided we had to leave right now.”

The couple packed immediately and left Kyiv at 11pm on February 23 in their Skoda Octavia car, driving to the nearest safe border town of Siret where they could cross into Romania.

As they drove through the night they saw Russian rockets striking the airport at Ivano-Frankivsk in Western Ukraine, and realised the war had begun.

Roman, who trained as a lawyer before starting his own business, said: “Our apartment was only a few hundred metres from the Antonov aircraft factory in Kyiv, which was hit by missiles a few days after we left.

“How can you protect a two-year-old boy from such things? You cannot.”

It took the family five days to drive through Romania, cross Bulgaria and enter Turkey. They headed for the town of Canakkale, recommended by friends as safe, cheap and “not too cold”, where they rented a room costing £110 a month.

From there they considered applying as refugees to Canada, Switzerland and the UK. At the same time Helen, 55, registered with the UK’s Homes for Ukrai-nians scheme. The solicitor and school governor agreed to sponsor them and their visas were approved just over a month later.

The Bezsonovs left Canakkale on April 26, taking a six-hour bus ride to Istanbul, where they caught a flight to Gatwick airport. They were met by Helen and the Daily Express and taken to Helen’s four-bedroom home, where Erik has his own room.

Iryna, who hopes to return to Ukraine when the war is over, said: “We cannot give enough thanks to Helen and the people of Britain for the warm welcome we have received.

“We are grateful for the military help given to the Ukrainian army in this difficult and
important time.

“We have been told Boris Johnson has some problems in this country but you should know that in our country he is a hero.

“No other country has done more to help us.”

It is fantastic that this family from Ukraine has safely arrived in the UK.

Thanks to the incredible generosity of Helen Peach and the Daily Express they
will be able to build a life here.

There are tens of thousands of people in the UK who, like Helen, have opened their hearts and their homes to lots of people fleeing the conflict.

Because of such unwavering kindness, in almost two months over 86,000 people have received visas.

This has meant more than 27,000 Ukrainians have arrived safely in the UK to live, work and find stability. I acknowledge there have been teething problems but we made a raft of changes to speed up the visa system.

These have included cutting down the application form and opening the online-only application process for Ukrainians with valid international passports.

I am proud to say these are working and enabling thousands more Ukrainians to come to the UK.

But it is not just these changes that have contributed to the success of our Ukraine schemes, but the resoluteness of the British public to the situation in Ukraine.