No new date announced for talks that were scheduled to take place in Istanbul on Sunday and Monday. 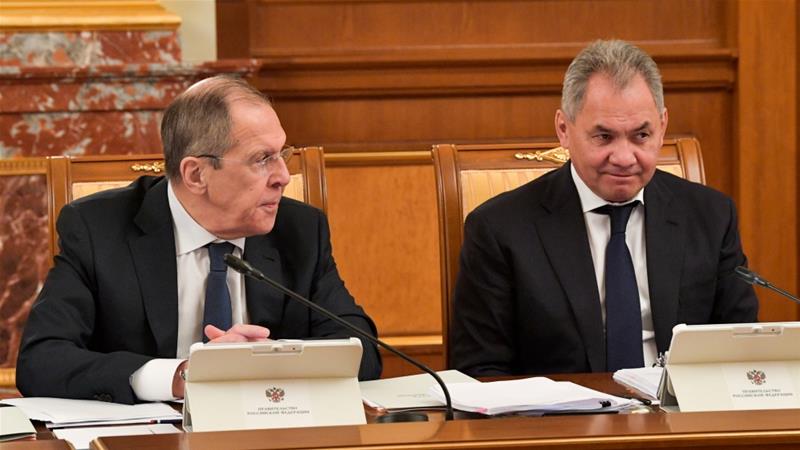 Russia and Turkey have postponed ministerial-level talks that were expected to focus on Libya and Syria, where the two countries support opposing sides in long-standing conflicts.

“The two countries’ deputy ministers will continue contacts and talks in the period ahead. Minister-level talks will be held at a later date,” the ministry said in a statement.

Lavrov and Russian Defence Minister Sergei Shoigu were to visit Istanbul for the discussions.

This week, the United Nations said warring sides had begun new ceasefire talks in Libya, where Ankara supports the internationally recognised Government of National Accord (GNA), whose forces have in recent weeks repelled an assault on Tripoli by the self-styled Libyan National Army (LNA).

Moscow, along with the United Arab Emirates and Egypt, backs the LNA in the long-running Libyan conflict.

Turkey has always said its political and military support will continue for the GNA, the only government it recognises, which is led by Fayez al-Sarraj.

Diplomatic sources told Al Jazeera that the disagreement was on the appointment of Aguila Saleh as the new leader of a political settlement in Libya as proposed by Russia.

While Turkey is understood to be in agreement with Saleh’s appointment, it wants him to remain a supportive figure to Sarraj and not his replacement.

In the talks, the Russians were expected to offer to replace the LNA’s commander, Khalifa Haftar, with Aguila Saleh, the representative of the Tobruk House of Representatives, as he is seen as in a position that would support the GNA and al-Sarraj, and could also be involved in the political settlement in Libya.

Although a Turkish-Russian brokered deal three months ago produced a ceasefire that halted fighting in northwest Syria’s Idlib, air strikes have once again hit the region in the past week.

Iranian paramilitary forces in Idlib were to be an issue discussed in Istanbul.

Turkey has already expressed concerns and expectations regarding six significant locations where these forces are stationed.

Military sources say that especially in the last three months, Iranian paramilitary forces have increased their fighter numbers near some Turkish observation posts in Idlib – that was seen as a potential risk by Turkey.