The protests broke out in Yekaterinburg after the city’s former mayor was arrested. Footage on social media has emerged of protesters being brutally arrested for participating in the revolt. Former Yekaterinburg mayor Yevgeny Roizman was detained on Wednesday after labelling Russia’s invasion of Ukraine an “invasion”.

As uniformed officers led him from his home, the politician told a reporter that he was being charged as a result of “one phrase – ‘the invasion of Ukraine'”.

According to the BBC, he is being held on suspicion of “discrediting the Russian armed forces”.

The charge can reportedly carry a five-year prison sentence under strict new laws which ban criticism of the armed forces.

The 59-year-old politician served as mayor of Yekaterinburg, Russia’s fourth-largest city, from 2013 to 2018. 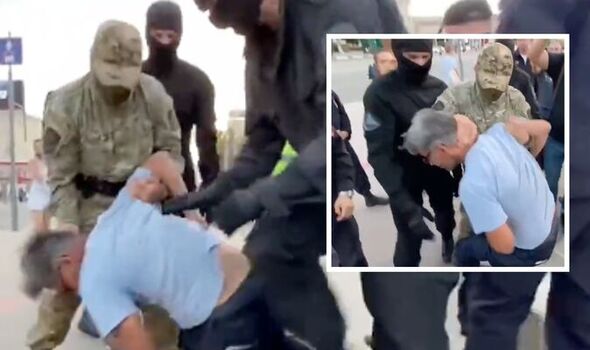 More than 224 Russians are facing jail time for calling the conflict a “war” or “invasion”, according to human rights group OVD-Info.

Russian officials have described the war as a “special military operation”.

Mr Roizman has continually been a vocal critic of the Kremlin throughout the war.

In an interview with the Observer, published in March, he said: “I now understand how the anti-fascists felt during the Third Reich.

“But I can’t flee, it is unacceptable for me to do that.”