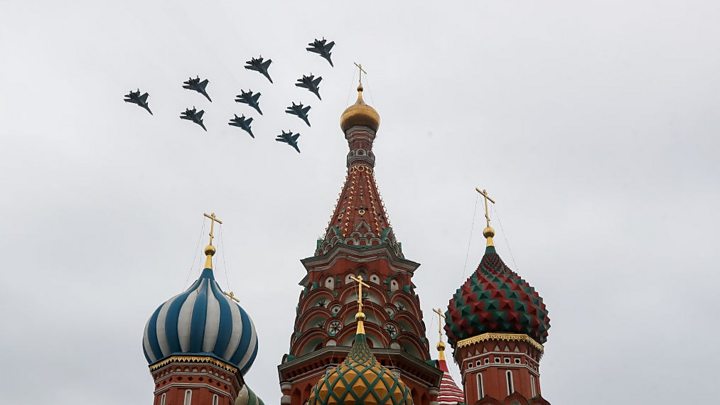 Russia has marked 75 years since victory over Nazi Germany in World War Two despite cancelling its traditional military parade because of the coronavirus outbreak.

On Saturday Russia recorded another rise of 10,000 cases of coronavirus.

The huge commemorations are important features of the calendars of former Soviet countries, which together lost around 26 million people in World War Two.

Fighter jets flew over Moscow, leaving a trail of colours of the Russian flag, and a column of soldiers marched past President Putin at the walls of the Kremlin.

But in Belarus, where President Alexander Lukashenko has denied coronavirus is a national threat, crowds of thousands attended Victory Day events.

Mr Lukashenko attended a parade in Minsk wearing a military uniform and said it was unacceptable for the country to think about cancelling the event.

On Saturday Mr Putin said Russia will “certainly celebrate this anniversary extensively and solemnly, as usual”, pledging the processions will be held at a later date.

Parts of Russia have been on lockdown since late March but the country now has the fifth-highest rate of infections in the world with almost 200,000 confirmed cases.

A rise of 10,000 cases has been reported daily in the past week.

In a televised address on Saturday Mr Putin said, “Our veterans fought for life, against death. And we will always be equal to their unity and endurance”

“We know and firmly believe that we are invincible when we stand together.”