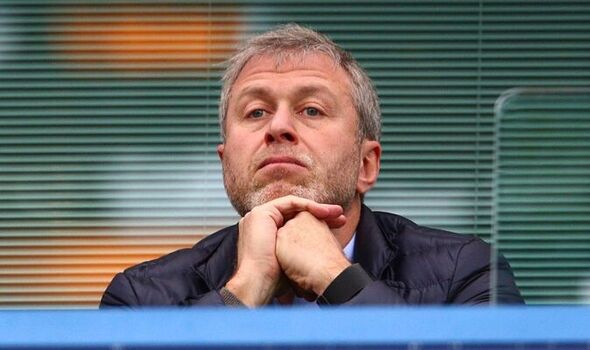 The owner of Chelsea since 2003 released a statement saying: “I have always taken decisions with the Club’s best interest at heart. I remain committed to these values.

“That is why I am today giving trustees of Chelsea’s charitable Foundation the stewardship and care of Chelsea FC.”

The Russian oligarch has not faced any sanctions and has always denied any suggestion of his alleged closeness to Vladimir Putin and his regime. It came as Russia was on the verge of being excluded from the Swift system of international banking payments last night after Germany weakened its opposition.

International agreement is needed for the “ultimate economic sanction” which would prevent Russia from getting financial transactions for its oil and gas.

Armed Forces Minister James Heappey yesterday said Britain was continuing to press for Russia to be banned from the system.

Hours later Germany changed its stance to say it was in favour of imposing “targeted and functional” restrictions on Russia from Swift. Its foreign minister, Annalena Baerbock, and economy minister, Robert Habeck, said in a joint statement: “We are urgently working on how to limit the collateral damage of decoupling from Swift in such a way that it affects the right people.

“What we need is a targeted and functional restriction of Swift.”

Ukrainian President Volodymyr Zelensky last night said he was “grateful” for this.

Meanwhile, it emerged Priti Patel will ask Parliament to pass emergency laws this week to allow the Government to seize assets of Russian oligarchs who support Putin.

The Home Secretary will introduce emergency legislation on Tuesday which will contain measures to overhaul and reform the UK’s Unexplained Wealth Order regime, saying it will tackle “Russian dirty money” in Britain and inflict financial pain on supporters of Russia’s president.

The proposals will enable law enforcement agencies to take more effective action against kleptocrats, compelling them to prove the origins of their funds in the UK.

Those who are unable to demonstrate that wealth was obtained legitimately could see their properties being seized. The UWO reforms will form part of a wider Economic Crime Package and more details on other measures will be available in due course.

Three Russian billionaires have been identified for sanctions and travel bans by the UK: Gennady Timchenko, 69, who controls the Volga Group and is worth £16billion; Boris Rotenberg, 65, who founded gas-pipeline construction firm Stroygazmontazh and his nephew, Igor Rotenberg, 48, stakeholder in drilling company Gazprom Bureniye.

Boris’s older brother Arkady, is also a co-owner of Stroygazmontazh and his relationship with Putin goes back to the 1960s. A source close to Ms Patel said: “Russian elites abusing our financial systems will have no place to hide as our law enforcement agencies target those connected to the Kremlin, sending a message that dirty Russian money cannot be hid or laundered in the UK.”

The global community announced further embargoes and boycotts against Russia and its allies with the French yesterday seizing a Russian cargo ship in the English Channel on its way to St Petersburg.

The vessel, called The Baltic Leader, was transporting cars and “strongly suspected of being linked to Russian interests targeted by the sanctions”, said Captain Veronique Magnin of the French Maritime Prefecture. The ship was diverted to Boulogne, northern France.

The vessel, which was flying a Russian flag, was mentioned in US Treasury reports which linked it to a Russian bank, Promsvyazbank Public Joint Stock Company.

“PSB was designated for operating or having operated in the defence and related material and financial services sectors of the Russian Federation economy,” the US Treasury said.

It was also targeted by EU sanctions.

Back in Britain, the Home Secretary kicked off a round of international sporting boycotts by withdrawing the travel visa for the Belarussian basketball team who were due to play in Newcastle today.

The Polish football team, meanwhile, announced it will not play a World Cup qualifier against Russia for Qatar 2022.

Russia were due to host Poland in a game in Moscow on March 24, while the Ukraine national team were due to travel to Scotland on the same day.

Sweden and the Czech Republic joined Poland in a joint statement demanding that Fifa should not allow play-off games to take part in Russia.

Praising the decision to boycott the match, Polish football legend and Bayern Munich striker Robert Lewandowski, 33, who is his country’s all-time highest goalscorer, said: “I can’t imagine playing a match with the Russian national team in a situation when armed aggression in Ukraine continues.

“Russian footballers and fans are not responsible for this, but we can’t pretend that nothing is happening.”

Russia found itself further isolated with new measures banning its aircraft from travelling through airspace over a group of European countries.

Estonia led the way with a ban on all Russian flights over its airspace and was joined by Lithuania, Latvia, Poland, Bulgaria and the Czech Republic.

The Estonian prime minister, Kaja Kallas, called for an EU wide ban to be imposed. She tweeted: “Estonia is banning Russian airlines from our airspace. We invite all EU countries to do the same. There is no place for planes of the aggressor state in democratic skies. #StandWithUkraine.”

Transport Secretary Grant Shapps announced Russian private jets would be banned from flying over the UK or landing in its airports.

He said: “Putin’s actions are unlawful and anyone benefiting from Russia’s aggression in Ukraine is not welcome here.

“I’ve strengthened our ban in the UK so that no Russian private jet can fly in UK airspace, or touch down, effective immediately.”