The former warlord calls himself the Kremlin’s ‘foot soldier’. 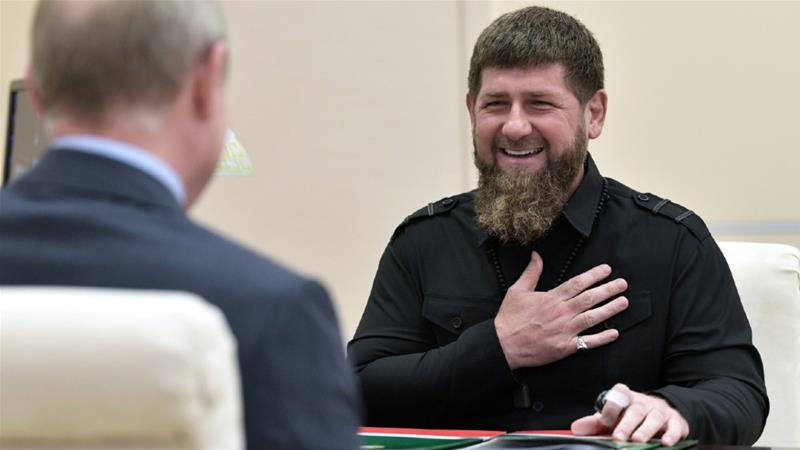 Chechen leader Ramzan Kadyrov, who was on Thursday reportedly being treated for coronavirus in Moscow, went from rebel fighter to Russian President Vladimir Putin’s fearsome enforcer, bringing his war-scarred region to heel with an iron-fisted rule.

He has taken a characteristically high-handed approach to the coronavirus, calling doctors in the region who complained of a lack of protective equipment “provocateurs” who should be fired.

Russian agency reports on Thursday said the Chechen leader, whose rule, according to rights groups, has seen torture and killings, is suspected of having the infection, and had been flown to Moscow for treatment.

The 43-year-old calls himself the Kremlin’s “foot soldier” but is widely thought to enjoy carte blanche from Moscow, which turns a blind eye to heavy-handed tactics in his North Caucasus fiefdom in exchange for loyalty.

Kadyrov rose to power in the wake of the murder of his father – regional leader Akhmat Kadyrov – with the backing of Putin.

Akhmat Kadyrov was killed when a bomb tore through the stand at Grozny’s main football stadium as he oversaw World War II victory commemorations in 2004.

Both father and son had fought against Moscow during the first bloody separatist conflict in Chechnya from 1994-96, but switched sides to support the Kremlin when it launched a second war there in 1999 under the watch of then-Prime Minister Putin.

Kadyrov has always been effusive in his praise for Putin who has described him in turn as a “son”.

He firmly turned his back on independence and in return his majority-Muslim homeland has in recent years seen intense reconstruction efforts bankrolled by Moscow.

“If it weren’t for Putin, Chechnya would not exist,” Kadyrov said in one interview.

Since taking over at the helm in Chechnya, Kadyrov – who was officially appointed the region’s president in 2007 after turning 30 – has ruthlessly looked to stamp out a lingering Islamist rebellion, and any forms of dissent.

Doctors who complained of a lack of protective equipment last week were filmed retracting their statements by a TV channel loyal to Kadyrov – a common approach to critics in Chechnya.

When a journalist for independent Novaya Gazeta newspaper reported critically on Chechnya’s hospital provision, Kadyrov issued a call for violence against her.

He also likened Chechens who do not self-isolate and infect others to “terrorists” who should be buried in pits.

Since the dark days of war the capital Grozny has undergone a transformation, with Kadyrov overseeing a major building programme.

But rights activists say that stability in the region has come at a high cost as Kadyrov has brutally crushed all opposition and turned Chechnya into his personal domain with a private army.

And the family and allies of slain Russian opposition politician Boris Nemtsov have pointed the finger of blame for his death at both the Kremlin and Kadyrov, who has denied the accusation.

Rights groups meanwhile have been pushed out. The head of the Chechen branch of Russia’s Memorial, the last active in the region, was convicted of drug possession in 2019, prompting international condemnation.

In elections under Kadyrov, Chechnya has delivered tallies of nearly 100 percent for the Kremlin.

The bearded ruler has carved out a public profile, posting regularly on Instagram – which recently closed his account – and Telegram.

Despite Russia’s secular tradition, Kadyrov has sought to impose his version of Islamic values: encouraging women to wear headscarves and men to take up to four wives, even though polygamy is forbidden under Russian law.

Kadyrov has claimed there are no gay people in Chechnya and gay men have given accounts of kidnap and torture by law enforcement agencies.

While Putin has held up Chechnya as a success story, Russia’s marginalised opposition says that by giving Kadyrov free rein, Putin is playing with fire.

They say Putin has essentially come close to handing Chechnya de facto independence – and this could eventually blow up in the Kremlin’s face.