TRIPOLI, Lebanon (Reuters) – Protests against growing economic hardship erupted in Tripoli and spread to other Lebanese cities on Tuesday, with banks set ablaze after a night of rioting that left one demonstrator dead, according to security and medical sources. 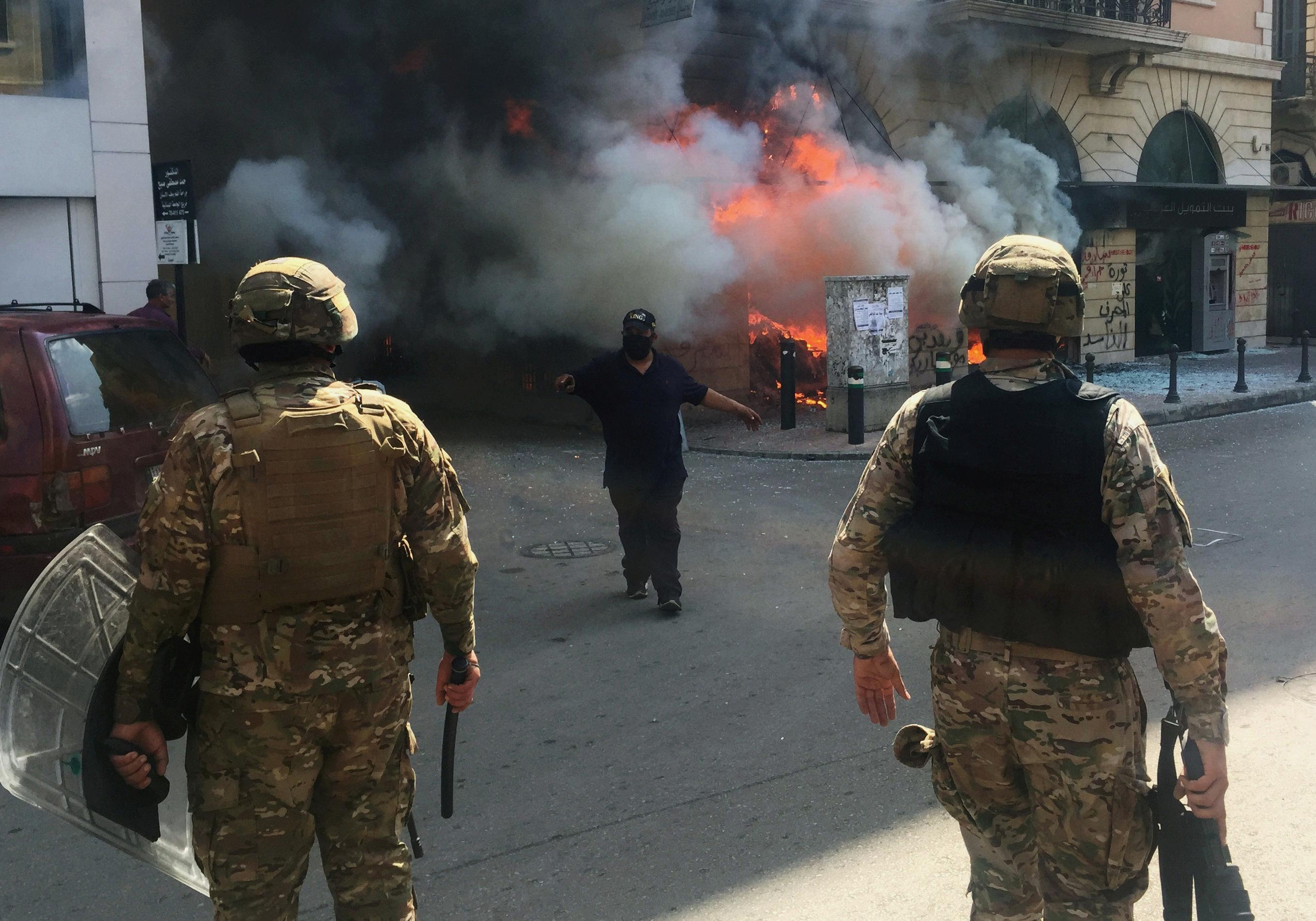 A collapse in the currency, soaring inflation and spiralling unemployment are convulsing Lebanon, in deep financial crisis since October. A shutdown to fight the new coronavirus has made matters worse for the economy.

Protesters in Tripoli set two banks on fire and smashed their facades, prompting the army to deploy and dozens of soldiers to take position in a street lined with several banks, some firing rubber bullets and tear gas.

Riots that began a night earlier and which set several other banks and an army vehicle on fire in the city ended with the death of a man in his 20s, according to a security source who said it was not immediately clear who was responsible for his death.

Later on Tuesday protesters in the southern city of Sidon chanting “revolution” hurled petrol bombs at a central bank building, setting its exterior on fire before smashing the fronts of several banks.

In Beirut dozens marched across the city, some wearing medical masks while chanting against the financial system and shouting for more Lebanese to join. Later, crowds hurled stones toward security forces positioned in front of the central bank.

The unrest threatens to tip the country back into violence even as Beirut looks to pass an economic rescue plan and enter negotiations with foreign creditors after defaulting on its hefty debt obligations last month.

Prime Minister Hassan Diab urged Lebanese to refrain from violence and said “malicious intentions behind the scenes” were “shaking stability”.

“We are faced with a new reality, a reality that the social and living crisis has made worse at record speed, especially with the rise of the U.S. dollar exchange rate to record levels on the black market,” Diab said in a statement.

Lebanon’s pound has lost more than half its value since October and slid sharply over the past week, triggering small protests despite a coronavirus lockdown and pleas by officials for people to remain home.

U.S. dollars sold for 4,200 Lebanese pounds on Tuesday according to one importer, despite a central bank directive capping the price at 3,200. Several currency dealers were arrested on Monday for violating the cap, prompting their trade association to announce an open-ended strike.

In a phone call to Diab, French Foreign Minister Jean-Yves Le Drian said Paris was ready to convene an international support group meeting for Lebanon as soon as coronavirus lockdown measures were lifted.

Diab’s government, formed in January with the support of the powerful Iran-backed Hezbollah, has struggled to enact reforms demanded by foreign donors to release billions of dollars in pledged financing.

“People have lost their purchasing power and the state has no plan to do anything. Banks are closed and not giving money to people. I think this government should resign,” said Tripoli lawyer Fahed Moukaddem.

Information Minister Manal Abdel Samad said after a Cabinet meeting that “final touches” were being put to the rescue plan, a draft of which this month estimated losses in the banking sector at $83 billion.

Tripoli, a port city 80 km (50 miles) north of Beirut and long dogged by poverty and unemployment, was the stage for protests against Lebanon’s ruling elite last October.

“This is not a riot, this is expressing (anger) that the dollar has reached 4,000 Lebanese pounds. … How are people going to eat? And this is the holy month of Ramadan,” said Abou Hussein, a Tripoli activist.

The army said a firebomb was thrown at one of its vehicles and a hand grenade hurled at a patrol. It blamed “infiltrators” and called on peaceful protesters to leave the streets.

It said 40 soldiers were wounded in Tripoli and elsewhere after patrols sent to reopen roads were attacked with stones. Three banks and several ATMs in Tripoli were burned overnight and nine protesters arrested, a statement said.

A statement from the U.S. Embassy in Beirut said: “The frustration of the Lebanese people over the economic crisis is understandable, and the demands of protesters are justified. But incidents of violence, threats, and destruction of property are deeply concerning, and must stop.”

The U.N. Special Coordinator for Lebanon, Jan Kubis, said the violence was a warning for Lebanon’s political leaders. 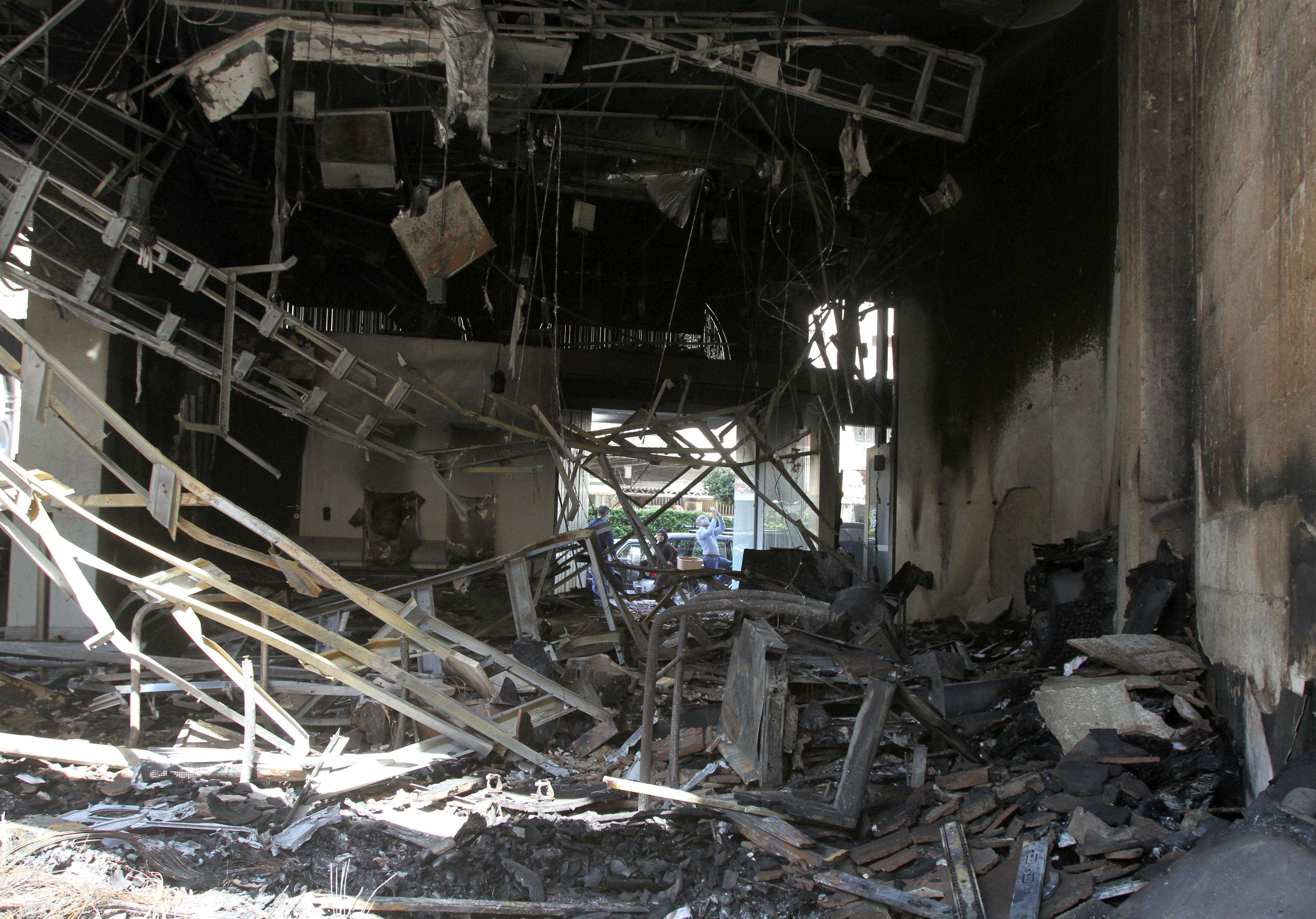 “This is the time to provide material support to increasingly desperate, impoverished and hungry majority of Lebanese all around the country,” he wrote in a tweet.

The banking association declared all banks in Tripoli shut until security is restored. Only a handful of branches have been open during the coronavirus lockdown.

Banks have been a target of savers angered by being frozen out of their deposits. One each in the southern cities of Sidon and Tyre were attacked on Saturday and Sunday.