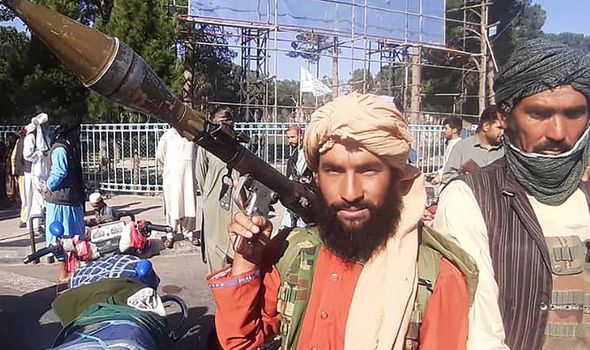 Defence Secretary Ben Wallace on Thursday announced the UK is sending military personnel to help with the mass evacuation.

And yesterday the Prime Minister held a meeting of his Cobra emergency committee to discuss the deployment of around 600 troops to help embassy staff, UK citizens and Afghans who helped British troops leave the war-torn country.

He said they will be brought back “over the next few days”.

The move came as the security situation in Afghanistan rapidly deteriorates, with the Islamist military organisation controlling vast swathes of the country.

Militants hoisted their black flag over the former governor’s palace.

The Taliban has now taken 12 of Afghanistan’s 34 provincial capitals.

And last night fighters were reported to have also seized Pol-e Alam, the provincial capital of Logar, which lies less than 40 miles south of Kabul.

Following his meeting with key defence and security chiefs, Mr Johnson said: “The situation in Afghanistan has deteriorated.”

Labour and the Lib Dems last night urged him to recall Parliament to debate the situation.

And Antonio Guterres, the UN Secretary-General, called on the Taliban to immediately halt their offensive, warning the country is, “spinning out of control”.

He told reporters: “The message from the international community to those on the warpath must be clear: seizing power through military force is a losing proposition. That can only lead to prolonged civil war or to the complete isolation of Afghanistan.”

The Prime Minister said the Taliban takeover of swathes of Afghanistan was the “logical outcome” after US President Joe Biden’s decision to withdraw all US troops by the middle of next month.

British combat troops withdrew in 2014, leaving some in Kabul. Most of those left last month.

Mr Johnson added: “In the course of the next few days we will see the vast bulk of UK embassy staff officials come back.

“And we’ll step up our efforts to bring back those Afghans who have helped us, helped the UK, helped international forces throughout the last two decades, in addition to the 2,000 who have already come out.

“It is very difficult, obviously, but I think the UK can be extremely proud of what had been done in Afghanistan over the last 20 years.

“Don’t forget the combat mission ended in 2014 – there isn’t a military solution.

“But thanks to the efforts of the UK Armed Services, and to the sacrifices they made, we have seen no al-Qaeda attacks against the West for a very long time and there are millions of girls and young women who have been educated in Afghanistan.”

Mr Wallace said he feared al-Qaeda will “come back” because of instability in Afghanistan.

He said: “I am absolutely worried that failed states are breeding grounds for those types of people.

“Of course I am worried, it is why I said I felt this was not the right time or decision to make because, of course, al-Qaeda will probably come back, certainly would like that type of breeding ground.

“That is what we see, failed states around the world lead to instability, lead to a security threat to us and our interests.”

He said more soldiers could be sent in if the Taliban’s tightening grip on the country poses a security threat to the UK, either on the ground or by carrying out airstrikes.

Seizing power through military force is a losing proposition

Mr Wallace added: “I will always deploy either force or disruptive capabilities alongside other parts of the British state — or indeed a coalition — to protect our national security and our interests.

“We will always do that, we will reserve the right to do it, and that is a global capability.”

Prince Charles was kept informed of developments as staff from his charity The Turquoise Mountain Foundation, which he formed in 2006 with former Conservative international development secretary Rory Stewart, were evacuated from Afghanistan yesterday.

Last night two expatriates were flown back from Kabul. The charity employs craftsmen and women to sell their work and uses traditional arts to regenerate historic areas.

Meanwhile, senior Tory MPs hit out at the West’s withdrawal from the country where more than 450 UK troops have lost their lives in two decades of conflict and thousands more have been injured.

Former defence minister Johnny Mercer described the situation as “humiliating” and warned: “Biden has made a huge mistake here, but also we have a role.

“This idea we cannot act unilaterally and support the Afghan security forces is simply not true. The political will to see through enduring support to Afghanistan has not been there and a lot of people are going to die because of that.

“It’s a world tragedy and we are going to reap the repercussions over many years.”

Tory Tom Tugendhat, chairman of the Commons foreign affairs committee and a former Army officer who served in Afghanistan, posted a series of withering Tweets. He said: “It’s wasteful and unnecessary… and I know who’s going to pay for it – we will.

“Investing in ourselves, our allies and partners has never been easier or more important.”

Philip Hammond, the former defence and foreign secretary, described the withdrawal as a “strategic miscalculation”.