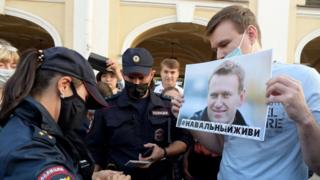 An air ambulance has begun its journey from Germany to bring Russian opposition figure Alexei Navalny from Siberia to Berlin for treatment following his suspected poisoning.

Medical equipment and specialists are also on the plane, the head of German peace foundation Cinema for Peace said.

Mr Navalny is in a coma after falling ill during a flight on Thursday.

His team suspects something was put in his tea at an airport cafe.

“We are in contact with the authorities and hope that all permits for the transport and a medical report for the coma patient will be given tonight,” he added on Thursday evening.

Both Germany and France have said they are happy to help with treatment. German Chancellor Angela Merkel said “he can receive from us all the help and medical support needed”.

A spokesperson for Russia’s President Vladimir Putin said the Kremlin would help move Mr Navalny abroad if necessary and wished him a “speedy recovery”.

This is not the first time the Cinema for Peace Foundation has stepped into help a Russian activist: in 2018, it arranged for treatment of Russian activist Pyotr Verzilov in Berlin after his poisoning.

What happened to Alexei Navalny?

Mr Navalny, who in June described a vote on reforms allowing Mr Putin to serve another two terms in office, after the four terms he has already had as a “coup” and a “violation of the constitution”, fell ill during a flight from Tomsk to Moscow and his plane made an emergency landing in Omsk, Siberia.

“Alexei has toxic poisoning,” tweeted Kira Yarmysh, the press secretary for the Anti-Corruption Foundation, which Mr Navalny founded in 2011.

Video footage on social media shows Mr Navalny being taken on a stretcher to an ambulance on the airport runway.

Other disturbing video appears to show a stricken Mr Navalny in pain on the flight. Passenger Pavel Lebedev said he heard the activist “screaming in pain”.

Another photograph on social media purports to show Mr Navalny drinking from a cup at a Tomsk airport cafe.

He was taken to hospital where Ms Yarmysh said he was on a ventilator and in a coma. Police officers filled the hospital and his belongings were being confiscated, she added.

Mr Navalny’s wife, Yulia Navalnaya was initially denied access to her husband because authorities said the patient had not agreed to the visit, Ms Yarmysh said, although she was later allowed on to the ward.

His doctor Anastasia Vasilyeva said earlier that hospital doctors were refusing to provide records of his condition.

What’s the latest on his condition?

Mr Nalvany’s family want to transport him to another clinic for safety reasons, Ms Yarmysh said, adding that doctors were refusing to discharge him for emergency treatment in Europe.

Interfax news agency reported that doctors have made a preliminary diagnosis of poisoning with an unidentified psychodyslepti, although the BBC has not been able to independently verify this.

Kremlin spokesman, Dmitry Peskov, said the results of tests on Mr Navalny were needed before it considered a request for him to be moved aboard.

Ms Yarmysh told the Echo of Moscow radio station that she was “sure it was intentional poisoning”.

State news agency TASS cited a police officer saying, “we can’t rule out that he drank or took something himself yesterday.”

Ms Yasmysh dismissed this as “complete rubbish” and said he had been swimming in a river the night before and was sober.

Who is Alexei Navalny?

He made a name for himself by exposing official corruption, labelling Mr Putin’s United Russia as “the party of crooks and thieves”, and has served several jail terms.

In 2011 he was arrested and imprisoned for 15 days following protests over vote-rigging by Mr Putin’s United Russia party in parliamentary elections.

Mr Navalny was briefly jailed in July 2013 on embezzlement charges but denounced the sentence as political.

He attempted to stand in the 2018 presidential race but was barred because of previous fraud convictions in a case he again said was politically motivated.

Mr Navalny was also given a 30-day jail term in July 2019 after calling for unauthorised protests.

He was taken ill during that jail sentence. Doctors diagnosed him with “contact dermatitis” but he said he had never had any acute allergic reactions and his own doctor suggested he might have been exposed to “some toxic agent”. Mr Navalny also said he thought he may have been poisoned.

Mr Navalny also suffered a serious chemical burn to his right eye in 2017 when he was assaulted with green, antiseptic dye.

Last year his Anti-Corruption Foundation was officially declared a “foreign agent”, enabling the authorities to subject it to more checks.