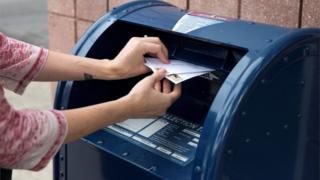 Speaker Nancy Pelosi will call on the House of Representatives to return to session in the coming days to vote on a bill to protect the US Postal Service.

In a letter released on Sunday, Ms Pelosi accused President Trump of a “campaign to sabotage the election”.

It comes after the USPS warned that millions of mail ballots may not arrive in time to be counted in the election.

Critics blamed the new USPS head – a loyal supporter of the president – for a slowdown in deliveries.

A record number of people are expected to vote by mail ahead of the 3 November presidential election due to the pandemic.

The president has repeatedly said mail-in ballots will lead to voting fraud and give a boost to his rival Democrat Joe Biden. However, experts say the mail-in voting system, which Mr Trump himself uses, is safe from tampering.

In a letter released on Sunday, Ms Pelosi criticised plans by the USPS’s new head, Louis DeJoy, which she said would “degrade postal service, delay the mail, and – according to the Postal Service itself – threaten to deny the ability of eligible Americans to cast their votes through the mail in the upcoming elections in a timely fashion”.

“Lives, livelihoods and the life of our American Democracy are under threat from the president,” she added.

Ms Pelosi said she would call on House representatives to vote on a new bill to prohibit the USPS from introducing any changes to the service or operations it provided at the beginning of this year in the coming week. A date for the vote has not yet been announced.

She also joined a number of Democrats in calling on Mr DeJoy and another senior USPS figure to testify at an “urgent” hearing of the House Committee on Oversight and Reform on 24 August.

Democrats, including former President Barack Obama, have accused Mr Trump of attacking postal voting and the USPS in a bid to “undermine the election”.

President Trump has previously told Fox News he was blocking additional funding for the financially troubled agency, because he opposes mail-in voting.

“Now they need that money in order to make the post office work so it can take all of these millions and millions of ballots,” he said. “Now, if we don’t make a deal, that means they don’t get the money. That means they can’t have universal mail-in voting, they just can’t have it.”