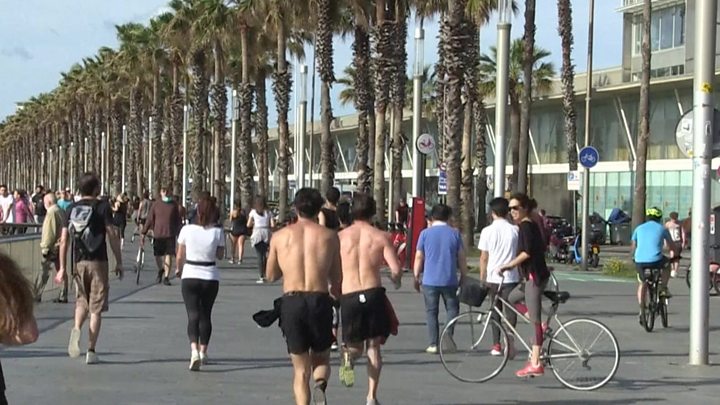 Walking on the streets of Madrid, you come across many police cars patrolling, a few taxis here and there, blue buses and an army of food deliverers.

Sweating on their bicycles, zipping through on their mopeds, you see them everywhere.

Around dinnertime, groups of seven or eight form outside sushi restaurants and burger joints, all waiting to rush the order to their hungry, confined customers.

One of them is Fredi. He’s got pizzas in his yellow thermal bag so he can’t stop for too long.

“The first two weeks of lockdown there was a lot of work but then it slowed down. You can feel people have less money now.”

A few hundred metres away, coming out of the metro station, Asuncion readjusts her face mask.

She has spent the lockdown in the house of her employers – an elderly couple she looks after.

“I’m so glad to be finally able to walk outside for a bit,” she says. “The people I work for are nice and treat me well but 48 days inside is a long time.

“I’m grateful I could carry on working as many have lost their jobs.”

Just off the deserted Plaza Mayor square, Valentin makes up his bed.

He’s been homeless for a while and has spent the lockdown on the same street corner, at the entrance of a Five Guys burger joint.

Valentin is in high spirits. “For me it’s just the same, only quieter. I have less problems than many as I don’t have to worry about paying a rent.”

But he says he sees more rats than before at night. “I think there is less food for them down there so they come out looking for food up here.”