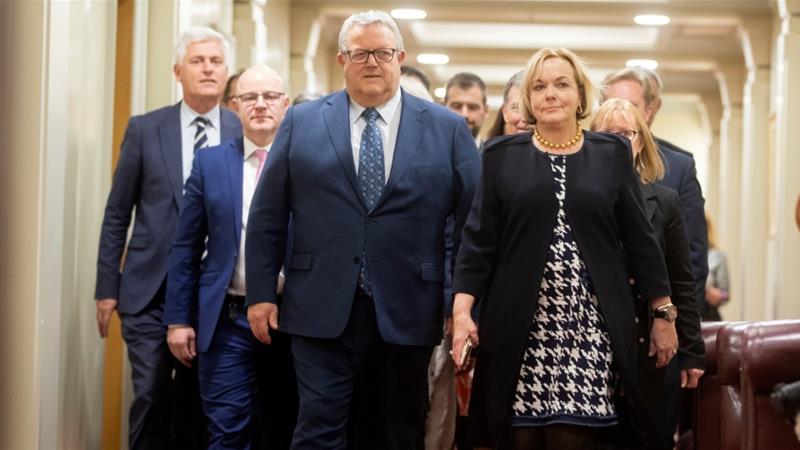 New Zealand’s main opposition party has named a new leader as it regroups for the daunting task of trying to oust Prime Minister Jacinda Ardern in a September general election.

The centre-right National Party selected Judith Collins in a caucus vote late on Tuesday, hours after her predecessor Todd Muller unexpectedly quit, saying the pressure of the role was too much.

Collins is best known to New Zealanders for a stint as police minister under previous Prime Minister John Key, when she earned her nickname “Crusher Collins” by bringing in a law allowing officers to confiscate and destroy the cars of illegal street racers.

The 61-year-old played up her tough image after being confirmed as leader, telling reporters: “I am hoping that the National Party can crush the other lot when it comes to September 19.”

Collins admitted she faced a difficult task against Ardern, whose centre-left Labour Party leads the National Party 50 percent to 38 in opinion polls.

“I love causes that are looking pretty tough, that’s when I tend to get really interested,” she told radio station Newstalk ZB.

“I obviously thought about whether or not I should put my hands up in the circumstances but I thought… I can make a difference.”

Collins is the fourth National leader since the 2017 election, but brings more political experience than her predecessors, having first entered parliament in 2002.

A popular figure with the conservative wing, she vowed to unify the party to present a strong challenge to Ardern.

Recent opinion polls have predicted that Labour could govern on its own, without a coalition, helped by the soaring popularity of Ardern.

In one recent poll, Ardern was named the country’s most popular prime minister in a century.

She has won widespread praise for a COVID-19 response that has limited New Zealand to just 22 deaths in a population of five million, a fact Collins acknowledged.

“I think it’s important to give credit where it’s due,” she said.

“But at the same time, there is no chance at all that I’m going to let Prime Minister Jacinda Ardern get away with any nonsense when it comes to the economy and doing her job. We will hold her to account.”

Asked about the potential threat posed by Collins, Ardern said she had not given it any thought.

“My time, my energy, is going into our COVID response and that’s as it should be,” she told reporters.