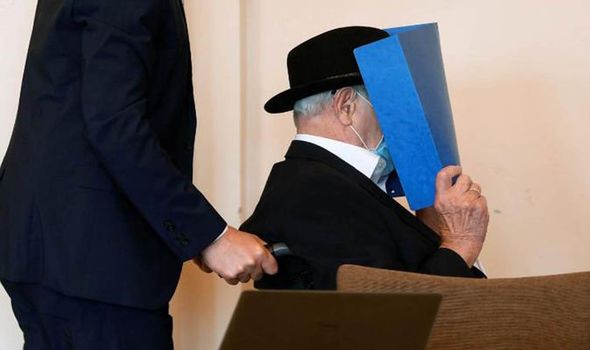 Bruno Dey was charged with 5,230 counts of accessory to murder over his time as an SS guard at the Stutthof concentration camp from 1944 to 1945. He was found guilty yesterday at the hearing in Hamburg of aiding the murders of the victims, many of whom were Jewish. He faced a juvenile court because he was 17 at the time he served.

He admitted being a guard but argued he had no choice at the time.

Dey said: “I would like to apologise to all the people who have gone through this hell of insanity and to their relatives and survivors.”

More than 40 co-plaintiffs from France, Israel, Poland and the United States testified during the trial, which began in October.

Concluding just over 75 years after the Second World War ended in Europe, it will almost certainly be one of the last trials of a former Nazi.

It is estimated that around 65,000 people were murdered during the Holocaust at Stutthof near the city now called Gdansk in German-occupied Poland.

Dey came to the attention of prosecutors during the trial of a former Sobibor SS guard.

He was indicted in April 2019 and lives with his family in Hamburg.

The verdict follows a 95-year-old man, also accused of being a guard, being charged on July 14 with war crimes during the Holocaust.

German prosecutors are investigating 14 other cases connected to the camps of Buchenwald, Sachsenhausen Mauthausen and Stutthof.