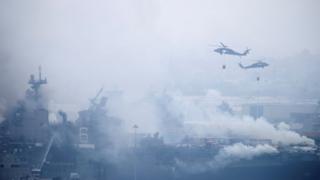 The US Navy has launched an investigation into a massive blaze aboard the USS Bonhomme Richard that took four days to put out.

The fire aboard the $760m US aircraft carrier injured at least 40 sailors and 23 civilians.

It is not yet known whether the ship can survive the damage caused by the fire that broke out on 12 July in San Diego, where the Bonhomme is docked.

The Navy is investigating the cause of the fire and emergency preparedness.

On Friday, Chief of Naval Operations Admiral Mike Gilday will travel to San Diego to inspect the ship amid the probe. “This is a very, very serious incident that I think will force the Navy to stand back and reevaluate itself,” Adm Gilday told Defense News.

The Navy must be prepared to issue an honest assessment of the incident and do something about it, he said. A previous internal study in 2012 had found that the US Navy had been accepting higher and higher fire risks in its operations.

“Could there be another Bonhomme Richard waiting to happen?” he asked “I’m not waiting for ‘number two’ to decide we have a trend here.”

The USS Bonhomme Richard, an amphibious assault ship, was commissioned in 1998 and is among the few US warships from which an F-35 Joint Strike Fighter can take off.

Repair would likely take months and hundreds of millions of dollars, but a new ship could cost as much as $4bn, according to one expert estimate.

A fire was first reported on board the 40,000-ton ship while in port at Naval Base San Diego on Sunday morning, local time.

The Navy helicopters carried more than 1,500 water bucket drops and tug boats sprayed water on the vessel’s side to cool it down in attempt to contain the blaze, US media reported. The fire sent plumes of black smoke billowing into the air and the ravaged ship’s melted aluminium superstructure bent at a 45-degree angle as flames engulfed the ship.

Sixty-three personnel suffered injuries, namely heat exhaustion and smoke inhalation while battling the blaze. None of the injuries are life-threatening, the Navy said.