Myanmar’s military chiefs have been warned they could face the same fate as Saddam Hussein or Muammar Gaddafi amid fears the country might be plunged into “the greatest civil war” it has seen.

The United Nations says 138 protestors have been killed since the February 1 coup, including at least 39 people on Sunday, the bloodiest day since the military seized power.

Dr Sasa, the disbanded democratic parliament’s special envoy to the UN, told Sky News that if the bloodshed continues without strong action from the international community, then the country’s people will be forced to defend themselves.

He appealed to the generals running the country to stand down, free the detained and return Myanmar to democracy.

If this did not happen, he predicted they would end up like Muammar Gaddafi, Saddam Hussein and Osama bin Laden – “arrested or killed”.

Colonel Gaddafi was captured and killed in October 2011, Saddam Hussein was executed in December 2006 and the former al Qaeda leader was killed in a US special forces raid in 2011.

Dr Sasa said India, China, the US, UK, Europe and neighbouring nations in Southeast Asia needed to work together to put pressure on the generals who have taken control.

“If we do not form this international coalition on Myanmar as soon as possible, it will bring, I’m afraid, the greatest civil war that we had ever seen,” he warned.

“What we mean is co-ordinated, targeted and tougher sanctions, both diplomatically and economically and politically.”

Myanmar’s army has claimed it was forced to seize power and declare a state of emergency last month in response to alleged fraud in November’s general election.

Since the coup, protesters have overwhelmingly focused on peaceful resistance, but Dr Sasa said many were losing faith that any outside help would come. 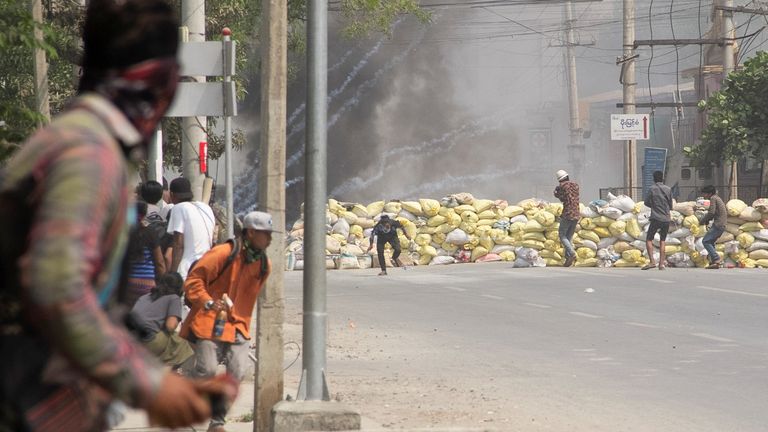 “So I think it’s very real that if we allow this situation to continue, people will be forced to defend themselves.”

According to human rights group AAPP Burma, more than 126 people have been killed by junta forces in the last six weeks. Some 2,156 have been arrested, charged or sentenced.

Relatives say some of those detained have simply disappeared, with families unable to contact them or find out what conditions they are being held in.

Several of the arrested have died in custody, including Zaw Myat Linn, an official from deposed Myanmar leader Aung San Suu Kyi‘s National League for Democracy (NLD), whose death was confirmed by colleagues last week.

He was the second NLD member to die following his arrest.

Dr Sasa, who himself had to flee following the coup, said the shooting of protesters and the fear of “disappearing”, as well memories of brutal crackdowns by the military on ethnic minorities including the Rohingya in 2017, was forcing people to want to defend themselves.

He believes a full-blown civil war could break out if people in cities including Yangon and Mandalay become so desperate they decide they have no choice but to fight back against the coup leaders in conjunction with ethnic armed groups, many of whom have been in conflict with the military for years. 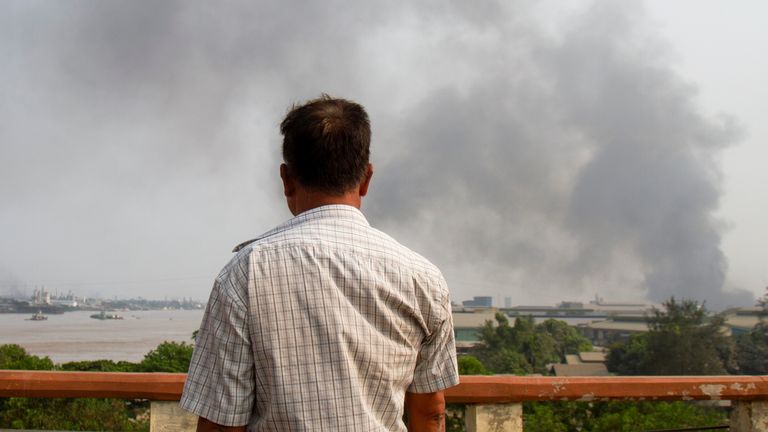 Since the beginning of independence from Britain in 1948, Myanmar’s military has been the most powerful institution in the country.

However, Dr Sasa claimed many troops would defect to support the resistance in the case of a widespread civil war.

“Most of these soldiers and police will run to us because it’s better for them to be with us than with this killer (the coup leaders),” he said.

“Remember, these ordinary soldiers – men and women in uniform – have been humiliated, have suffered even more than the people.

“They have been told to kill us, (told) if you do not kill, you will be killed. So kill or be killed, is the command they are giving to the soldiers.” 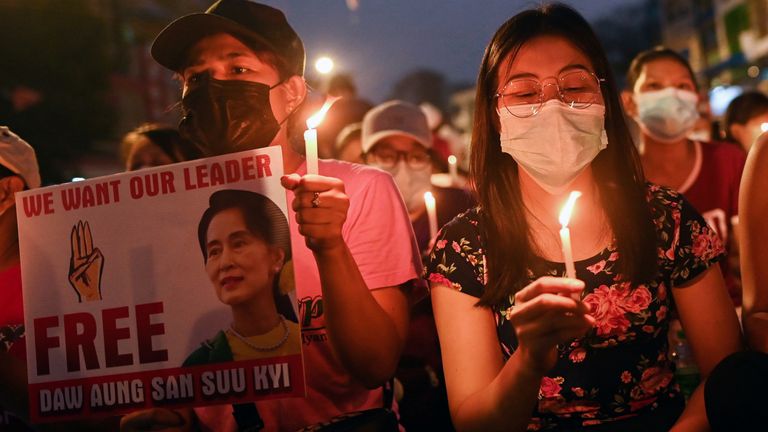 During the interview, he also raised concerns about the safety of Aung San Suu Kyi, who was detained in the early hours of 1 February.

Her virtual court appearance today was adjourned until 24 March due to issues with the internet.

Dr Sasa said: “We don’t know what is going to happen to our leader, Aung San Suu Kyi. We have no idea what will happen with our president, U Win Myint, and the thousands of people who have been detained… it’s very, very sad…it’s unbelievable and it’s unjustifiable and it’s illegal.”

Sky News contacted the military for comment but has so far not received a reply.