Rescuers retrieve 166 bodies but dozens more are feared dead after miners were swept away in a wave of mud. 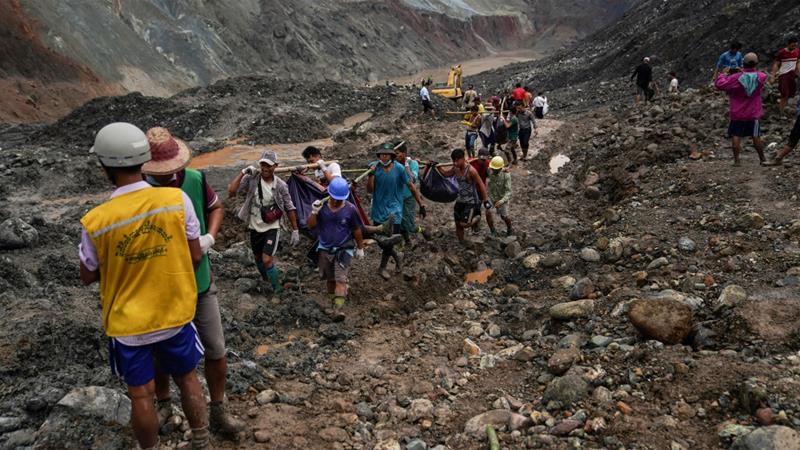 Rescuers in northern Myanmar have pulled several more bodies from the scene of a landslide which killed more than 160 jade miners, many of them migrant workers scouring the land for the precious stone.

The disaster – the worst in memory to strike Myanmar’s notoriously dangerous jade mines – occurred on Thursday when a hillside collapsed in heavy monsoon rains in Hpakant, in Kachin state near the border with China.

“The search and rescue missions continued today and we now have 166 bodies,” the Myanmar Fire Services Department said in a Facebook post, raising the overnight toll by four.

Hpakant, a remote area 950km (600 miles) north of Myanmar’s biggest city, Yangon, is the centre of the world’s biggest and most lucrative jade mining industry. Billions of dollars of jade is believed to be scoured each year from bare hillsides by poor migrant workers.

Aung San Suu Kyi, speaking on a scheduled Facebook Live broadcast with representatives of the construction industry, bemoaned what she described as the need for informal workers to sift for jade because they lacked other ways of making a living.

However, critics place the blame for such accidents on the legal mining operators and the government’s lax enforcement of safety measures.

In a statement on Thursday, the London-based group charged that Myanmar’s jade mining sector “is dominated by powerful military-linked companies, armed groups and cronies that have been allowed to operate without effective social and environmental controls for years”.

It singled out for blame the civilian government of Aung San Suu Kyi‘s National League for Democracy party, which came to power in 2016.

“Five years after taking office and pledging to reform the corrupt sector, the National League for Democracy has yet to implement desperately needed reforms, allowing deadly mining practices to continue and gambling the lives of vulnerable workers in the country’s jade mines,” Global Witness said in a statement on Thursday.

“Neither a promised new gemstone law, passed by parliament in 2019, nor a gemstone policy that has been in production for several years have yet been implemented.”

‘Bring my father back’

UN Secretary-General Antonio Guterres also expressed deep sadness at the deaths and sent condolences to families of the victims and Myanmar’s government and people.

Guterres expressed “the readiness of the United Nations to contribute to ongoing efforts to address the needs of the affected population”, said his spokesman, Stephane Dujarric. 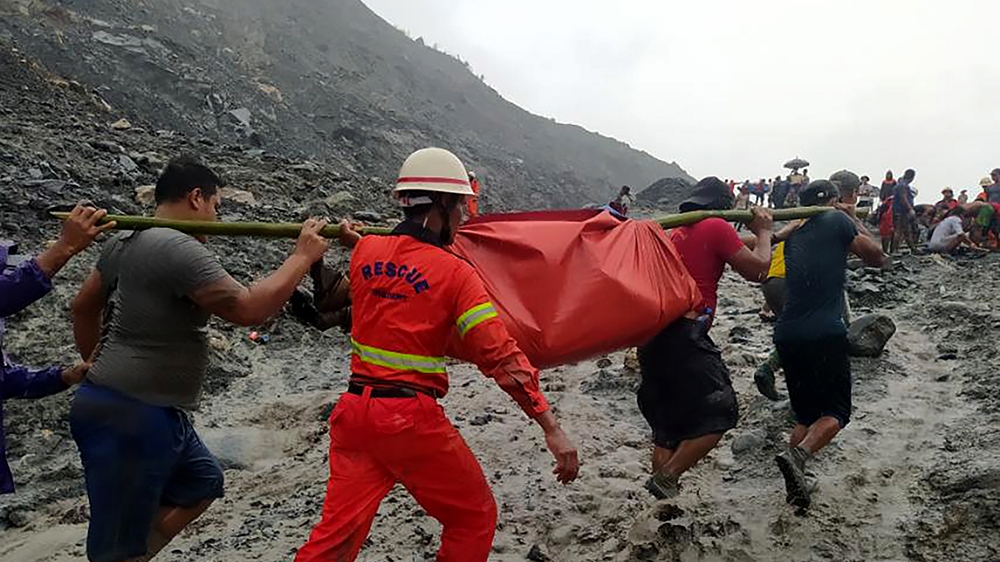 As photos of the dead circulated on social media, Facebook users began to identify workers hundreds of miles from home, leaving moving tributes to friends and family members.

“Please bring my father back,” said Hnin Wati. “A daughter’s heart is breaking.”

Another, a former miner, affectionately remembered one of the dead for his “kind heart” and generosity with his food during tough shared times on the mountainside.

Myanmar is one of the world’s biggest sources of jadeite and the industry is supercharged by demand for the green gem from neighbouring China.

Some jade brokers suspended online auctions on Thursday, and promised to donate money to their friends who were killed.

Many miners die every year in landslides and other accidents on unstable, over-excavated mountainsides. They are often from impoverished ethnic minority communities.

But Thursday’s accident was the worst in years. About 100 people were killed in a 2015 collapse which strengthened calls to regulate the industry. Another 50 died in 2019.