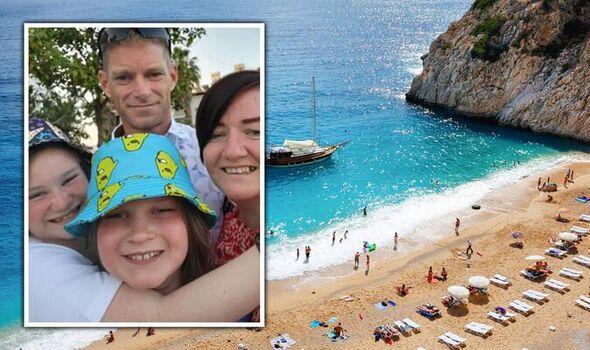 The incident is alleged to have happened in the early hours of May 16 during an Irish family’s holiday in Turkey. Elaine and Phil, from Dublin, had flown out with their two children, aged 10 and 11 for a holiday.

Midway through the trip, something “suddenly changed” a week into the holiday.

The family had spent the day outside of the hotel and when they returned, they went to an outdoor bar for a late-night drink.

Elaine and Phil met two English couples, one of whom they had been socialising with the night before.

However, while speaking to the two English dads, “two men came literally out of nowhere”.

Speaking to RTÉ’s Liveline, Elaine said: “Big, tall men, well over six foot. They got down into my face and shouted ‘shut the f up’.

“I said ‘excuse me?’ and they repeated ‘shut the f up’. At that point I walked over to Phil because they were aggressive.”

Elaine said her husband Phil went over to the men to ask if there was a problem and in that moment “everything changed”.

She said: “The two men attacked Phil. It was absolutely horrendous, the children were screaming.

“They basically grabbed Phil in an arm each and tackled him to the ground.

“The other two guys who I had been speaking to, Dean and Mike, were trying to help Phil.

“In the midst of this I ran to grab my children. Another man came out of nowhere and was trying to pick up one of the other children that was there.

“He threw a towel over her head and ran. Phil was screaming at the top of his voice to get the kids back to the hotel. It was pure and utter panic.”

Royal latest as Queen makes more appearances ahead of Jubilee

Dean, one of the parents that Elaine and Phil were socialising with, is the father of the two-year-old girl who was allegedly almost abducted.

Also speaking on Liveline, Dean said while the two men initially attacked Phil, he heard screams from behind and saw a third man “go over to my two-year-old daughter who was sat on a chair and put a towel over her and pick her up”.

“I managed to get away a bit and I heard the Turkish men shouting and they started running after me,” he said.

“I turned away and ran and hid around the corner. I then saw my eight-year-old son walk past crying his eyes out. So I grabbed him.”

Dean said that two German girls at the scene managed to grab his daughter, Evie back off the man and hid with her and Dean’s second son, aged five, in a bush.

“I had never met them before. They told me that they saw it all happen and that someone had tried to take my daughter so they took it on their own and got my children and hid them in a bush.”

Dean took his children and went to go back up to the room, as he thought it would be the safest place.

When contacted for information the hotel denied the incident took place.

Turkish police have been contacted for comment about the alleged incident.

A Garda spokesman told Dublin Live: “Gardaí received a report in relation to an assault that occurred outside the jurisdiction on 15th May 2022.

“This matter has now been forwarded to An Garda Síochána Interpol section for onward transmission to the relevant authorities.”