The UN’s nuclear watchdog has warned against any further escalation in the wake of the assassination of Iranian nuclear scientist Mohsen Fakrizadeh.

In his first interview since the killing, reportedly carried out by Israel, the head of the IAEA Rafael Mariano Grossi told Sky News Iran should not follow through on threats to increase uranium enrichment and throw out his inspectors.

“If implemented,” he told Sky News, “these measures would be an even further deviation from the commitments that Iran entered into when it joined the agreement. “I cannot imagine who would win from such a situation. If there was any limitation of the IAEA inspectors as a result of this or any other situation were curtailed in their work.

“Very clearly we would have to inform about this. We would have to be very clear to the world this is happening. And this in itself would not help anyone including Iran.”

The crisis caused by the killing of Mr Fakrizadeh, is escalating, jeopardising international efforts to restrain Iran’s atomic ambitions.

The country’s Guardian Council, another branch of government, has endorsed it, leaving Iranian president Hassan Rouhani who opposes the proposals little room to manoeuvre. 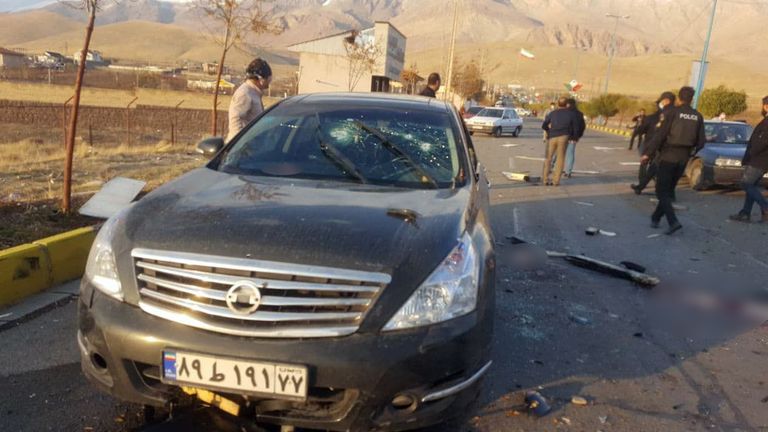 The agreement restricted it to only 202kgs (445lbs). But in May 2018 America pulled out of the deal and Iran started enriching again at a higher level.

Iran’s nuclear programme is in sites dotted across the country.

The IAEA inspects most of them but is still being denied access to Turquzabad in Tehran despite the discovery of suspicious radioactive material there.

“We are getting unsatisfactory answers so we are insisting on getting some.”

The fear now is of more surprises like the killing of Mr Fakrizadeh destabilising the situation even further. Mr Grossi told Sky News: “I hope things like this do not happen either in the past or the future. This is obvious.

“I’m the head of an international organisation dealing with peace and security and non-proliferation. So I hope there is no further escalation.

“I hope that we can continue working in the way we must.”

The danger is of unintended escalation.

Iran expands its enrichment and halts inspections and either America or Israel feel compelled to respond with force.

Mark Fitzpatrick, an associate fellow with the International Institute of Strategic Studies, said: “There’s a real possibility that Donald Trump or Israel would respond militarily if Iran does increase the enrichment to 20% or does stop inspections.

“If Iran stops inspections or raises enrichment or there’s a military strike against Iran’s nuclear facilities, Iran’s not going to sit back and take it. This would lead to another war in the Middle East.”

President-elect Joe Biden has said he wants to resuscitate the Iran nuclear deal.

But Donald Trump may make that harder still before he leaves the White House and hardliners in Iran may force the government to take a firmer line with the West, making it harder for the incoming president to negotiate.

Neither side may want an escalation but that does not necessarily mean it can be avoided.