KAWASAKI, Japan (Reuters) – Two paramedics jump out the back of an idling ambulance with Tokyo plates, carefully lowering an elderly woman on a stretcher. The patient, her small face covered with an oxygen mask, disappears behind St. Marianna’s automatic doors. 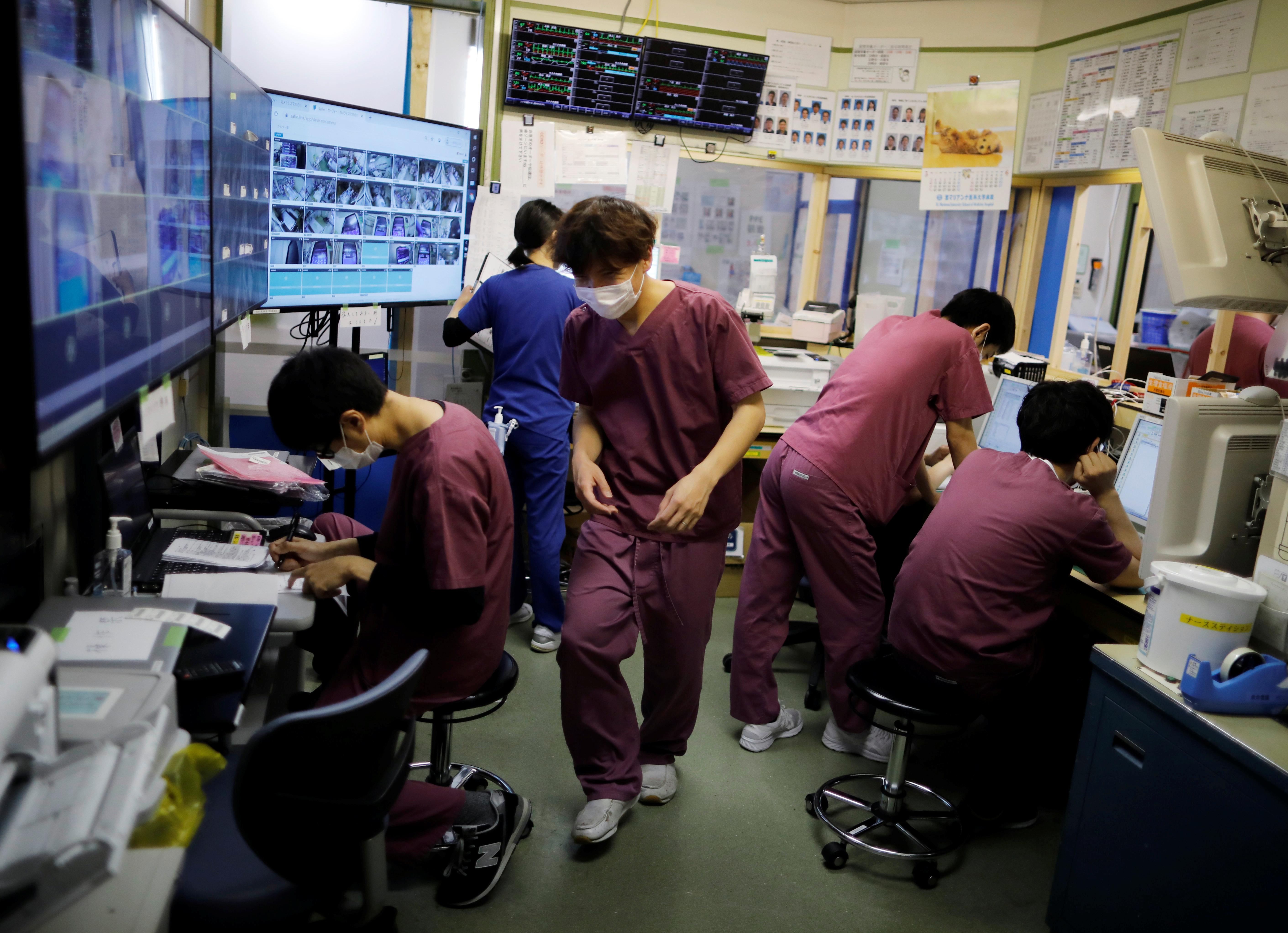 Another suspected COVID-19 patient has arrived.

In the midst of a global pandemic, St. Marianna University Hospital, a Catholic institution in a working-class suburb south of Tokyo, has become synonymous with the virus.

In the three months since the first wave of sick passengers arrived from the cruise ship Diamond Princess, the hospital has treated some 40 people seriously ill with the disease, more than almost any other medical facility in Japan. It has even taken in patients when other hospitals turned them away.

Doctors have intubated patients in a tent set up in the carpark and performed tracheostomies in a saran-wrapped operation room. Nurses in full protective gear gather in groups of six to shift patients connected to a tangle of lifesaving machines. And hanging in the staff room is an illustration of “Amabie,” a mythic Japanese creature thought to ward against plagues.

By most metrics, Japan has so far weathered the global pandemic better than many other countries. Infections haven’t spiked here as in other countries, and new cases have slowed since mid-April. So far, Japan has confirmed 16,251 infections, and 777 people have died, out of a global death toll of more than 300,000 people.

But it hasn’t always felt like success at St. Marianna, where every hallway and room inside the emergency and critical-care center has been allocated one of three colors: green, yellow and red. Daily life revolves around these boundaries now, with nurses and doctors moving between the world of waiting relatives wearing surgical masks in the “green” zone to the “red” ward, where they dress like astronauts, donning heavy-duty tyveks and HALO respirators.

Yasuhiko Taira, a professor at the medical school here, says that when the first COVID-19 patients started arriving in February, he reminded staff members they had an obligation to take in coronavirus patients who had nowhere else to go.

“We told them, yes, there’s a high chance you may get the virus, and since we’re doctors, we can’t do much about that,” says Taira, 66, who previously ran the ICU. “If we ran away from this, who’s going to do it?”

When St. Marianna was overwhelmed with patients early in the crisis, some private and public hospitals were still turning patients away for a number of reasons, including their lack of specialized staff and protective gear, with ICUs often citing their capacity constraints.

In April, Japan doubled the funds hospitals receive for taking in critical COVID-19 patients, easing the burden on places such as St. Marianna.

But over the period of several days spent with “Team C,” a group tasked with caring for coronavirus patients at St. Marianna’s ICU, there is a sense of resignation among the staff over what awaits them in the grueling months ahead, caring for patients who can seem on the verge of recovery, only to slip away a few days later.

“THE STRESS STARTS TO PILE ON”

It’s 8 a.m. and doctors from the overnight shift step up one by one to a senior doctor on duty, reading off an array of numbers and acronyms that make up the various conditions of each of the 11 patients inside the ICU. Shigeki Fujitani strides down a cramped hallway toward the central nurse station, thumbing a well-worn cellphone and nodding at staff in blue and purple scrubs.

“We had one death this morning,” says Fujitani, the 54-year-old director of the ICU, walking up to a large whiteboard divided into a grid with masking tape. The names of critical patients, all men in their 50s and 60s, are listed on the left, next to a condensed history of their time in the ward.

The dead man’s name has already been removed from the chart. The three beds now available in the ICU will likely be filled by evening.

“It’s common to see no change for weeks and then for the patient to not make it,” Fujitani says later, pacing in his office.

He mentions an ICU doctor who died by suicide in New York after seeing dozens of coronavirus patients die in her hospital.

“Everyone is trying to cure the patient, and then when you can’t … the stress starts to pile on after two, three months of this,” he says.

“YOU CAN’T SEE THE END OF THIS”

Outside the sliding doors of the ICU, Naoya Kohamoto takes a deep breath.

“You can’t see the end of this,” says Kohamoto, 37, a nurse practitioner who joined the coronavirus team a month ago. “They just don’t get better. You see data that says 80 percent of intubated patients don’t make it, but you always hope it’s not the case for your patient.”

When doctors in the ICU sense a patient is nearing death, Kohamoto calls the patient’s relatives and asks them to come to the hospital. Although they can’t physically be close to their ill relative, they’re able to talk to them over Facetime.

Wearing two layers of gloves, a face shield, a respirator mask and multiple plastic gowns, Kohamoto holds up an iPad to the unconscious patient so family members can share memories and say their farewell.

“I tell them their father is doing everything he can to still come home,” he says. When a patient dies, Kohamoto holds the iPad up to the doctor writing the official death certificate.

On a nearby notice board a clear file filled with consent forms for the experimental drug Avigan is tacked next to a handwritten letter sent by a family member of a patient who died last month.

“I never thought such a horrible thing could happen and I still can’t believe it’s true,” the sender wrote. “For all of you who worked under the risk of infection, with your own fear and worries, our entire extended family would like to express our gratitude for all that you have done.”

Kohamoto holds his tablet against his chest. After a pause, he adjusts his glasses and returns to the ICU through its automatic doors.

As governments contemplate reopening their economies after months of lockdown and people hope to return to their normal routines, it remains unclear even to front-line medical professionals to what extent the reopening may cause new spikes in infections.

“What we’re preparing for now is months of this, a lull, then a small cluster or spike,” Fujitani says. “It’s going to be a long battle, and we can’t have staff, especially nurses, burning out.” 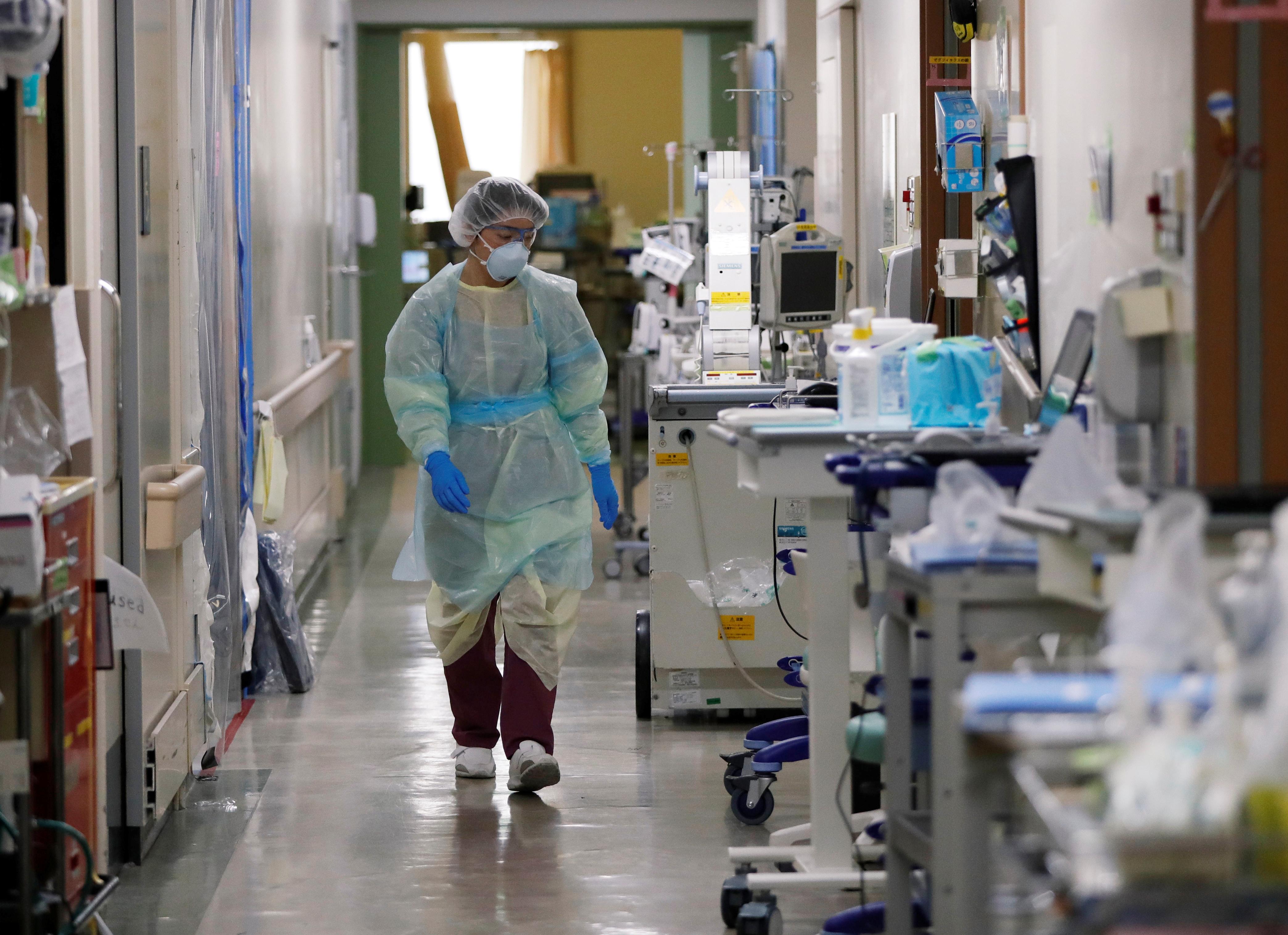 Yasunobu Tsuda, a critical-care nurse specialist whose wife is preparing to return to work as a midwife at St. Marianna after maternity leave, says the work takes its toll.

“You go home and the first thing you want to do is hug your child at the door, but you can’t,” he says. Even at home, Tsuda wears a mask.

“I don’t think my child even knows my face yet.”