JOHANNESBURG — Shepherd Bushiri, a multimillionaire pastor with a network of churches across Africa, has claimed he can walk on air and harness the power of God to cure people of H.I.V.

This past week, Mr. Bushiri, 37, appeared to perform another remarkable feat: spiriting himself out of South Africa, where he faces charges of fraud and money laundering, and back to his home country of Malawi, without a passport and undetected by law enforcement officials.

His disappearance has set off a power struggle between the governments of South Africa and Malawi, the small southern African country to which he fled, and which is now facing political pressure to turn him in. In South Africa, it has left ministers scrambling to explain how such a high-profile figure was able to abscond, and exposed serious lapses in the ability of officials to monitor the country’s borders.

Mr. Bushiri amassed tremendous wealth after founding the Enlightened Christian Gathering Church in South Africa’s capital of Pretoria. The megachurch, which he says has at least a million followers in South Africa alone, is one of the fastest-growing churches on the continent, and has branches in several other African countries.

He preaches to congregants, many impoverished and disillusioned, that by giving money to his churches, God will bless them with wealth and health — a brand of Pentecostal Christianity known as “prosperity gospel.” He has attracted attention for his penchant for ostentatious gold jewelry and expensive-looking suits, and for his jet-setting lifestyle traveling between his congregations in a private plane.

Mr. Bushiri has also built up a business empire, with an investment company with interests in mining and real estate. He has tried to use his money to influence politics in his Malawi, and at least one politician from the governing African National Congress in South Africa credits his career to Mr. Bushiri’s blessings. 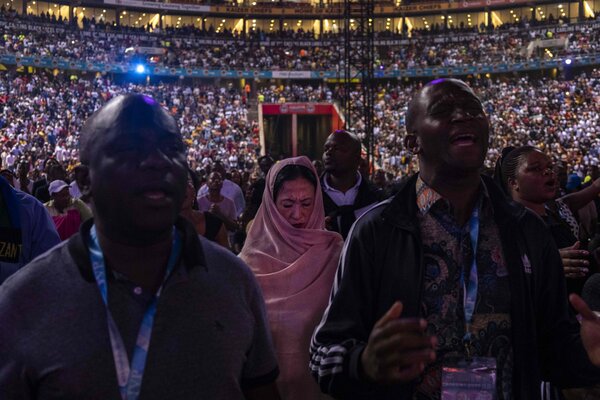 The case against Mr. Bushiri, his wife, Mary, and two co-defendants involves what prosecutors called a fraudulent “investment scheme” that had allegedly raked in some $6.6 million. But the prosecutors have never released details of the case. The Bushiris were first arrested in connection with the allegations in February 2019 by South Africa’s elite crime-fighting unit, known as the Hawks.

Mr. Bushiri has denied the charges and after skipping bail, posted a statement on Twitter saying that he and his wife fled after years of threats to their lives. He said that his requests for state protection had gone ignored, and that the case against him was “persecution NOT prosecution.”

“Our coming to Malawi, hence, is a tactical withdrawal from the Republic of South Africa solely meant to preserve our lives,” he said. His spokesman did not respond to multiple requests for comment.

The Bushiris had been released on bail this month after a hearing in which supporters chanted and prayed outside the courtroom. Bail conditions included remaining in Gauteng, the province that includes Johannesburg, where they live, and handing over five passports they each have, according to Aaron Motsoaledi, South Africa’s home affairs minister, speaking in Parliament on Tuesday.

Still, without a single passport in his possession, Mr. Bushiri turned up in his home country of Malawi last weekend, and from there launched an online tirade against South African officials.

The Bushiri affair has now reached the highest levels of government in both countries. On Tuesday, lawmakers in the South African Parliament grilled Mr. Motsoaledi, the minister of home affairs, about the lapses — or, as one suggested, the complicity — that had allowed the flamboyant pastor to flee, saying the blunder exposed flaws in national security.

In Malawi, members of the government were angry that South African officials seemed to suspect that the entourage of Malawian president, Lazarus Chakwera, had been trying to smuggle the pastor out of South Africa last weekend on a plane belonging to the president’s entourage. The Malawian government released a statement complaining that the presidential entourage was held up for hours at the airport in South Africa.

On Wednesday, Mr. Bushiri and his wife handed themselves in to a police station in Lilongwe, the capital of Malawi. A police statement, referring to Mr. Bushiri as “the Prophet,” said the pastor and his wife would be interviewed and would then face “a competent court of law in accordance with the prescriptions of law.” After detaining the Bushiris for one night, the authorities released the couple on bail, without requiring them to post a bond.

South Africa wants them extradited. Phumla Williams, a South African government spokeswoman, said in an interview on Wednesday, “We are currently preparing the paperwork to hand over to Malawi.”

It was unclear whether Malawi would hand over the pastor. Under a regional extradition treaty signed by both countries, any decision to surrender Mr. Bushiri would need to be made by the Malawian Ministry of Justice and approved by President Chakwera, a prominent Pentecostal church leader, who was elected in June of this year.

Returning Mr. Bushiri would risk riling his huge following in Malawi. On a 2018 trip there, tens of thousands flocked to a football stadium to give him a hero’s welcome, with a marching band and security officials escorting him. At that event, Samuel Tembenu, the Malawian minister of justice, gave a speech praising Mr. Bushiri on behalf of the man who was then country’s president, Peter Mutharika.

Gospel Kazako, Malawi’s minister of information, said in an interview, “We are governed by laws, and if the law allows us to send him back we will do so as law.”

Gary Eisenberg, a lawyer based in Cape Town who specializes in immigration and extradition, said, “It really becomes a political question at the end of the day. This is not a South African case any longer, it’s a Malawian case.”

Other legal experts said that another sticking point was that Mr. Bushiri has repeatedly claimed that he will not be guaranteed a fair trial in South Africa — a key requirement of the extradition treaty.

In 2018, Mr. Bushiri lodged his own case against the police, alleging that they had tried to extort him in the course of investigating him on separate, allegations of rape, for which he has not been charged.

Mr. Eisenberg said the pastor appeared to be setting the grounds for his case to be dismissed: “He’s tipping everybody off — he’s saying, listen to me, even the police who investigated me in South Africa are corrupt. So how can the process be unblemished by corruption?”

In 2017, he allegedly promoted a get-rich-quick program to church members, promising a 50 percent profit within a month if they pledged about $6,500 or more to his “commodity investment opportunity,” South African news media reported.

Many who poured their savings into the plan claim they lost their money, while others were advised to deposit their investments with Rising Estates, a company run by close associates of Mr. Bushiri. Police later opened an investigation into the program.

Mr. Bushiri, defending his opulent lifestyle, has said that part of his mission is to enable his congregants to likewise acquire such wealth, and that the church offers what it calls “entrepreneurial programmes and skills development.”

“There is this perception that men of God are not supposed to be rich,” Mr. Bushiri said in an interview on his church website. But, he added: “If you read the Bible, you will note that men of God were rich, including Abraham.”

Ralph Mweninguwe contributed to this story from Lilongwe, Malawi.