The Met Office has issued a slew of new yellow weather warnings as the UK braces for even more chaos caused by snow over the weekend and next week. Four weather warnings are in place across the UK over this weekend, ranging from snow to ice and rain as February shapes up to be as cold and wet as January.

Few areas will miss out on the snow this weekend and across next week, with hardly any ground not expecting snow or rain at some point.

The latest weather warning for ice put in place by the Met Office covers almost all of Wales, as well as much of the east midlands and the south around Gloucestershire, Oxfordshire, all the way down to London and parts of the southeast.

A combination of freezing temperatures and precipitation seen over the past 24 hours means icy conditions are highly likely, making travelling difficult and the risk of injury more likely.

The new warning reads: “Following rainfall, and some snow, on Saturday surfaces are likely to remain wet and with temperatures widely falling below freezing icy stretches are likely to form.” 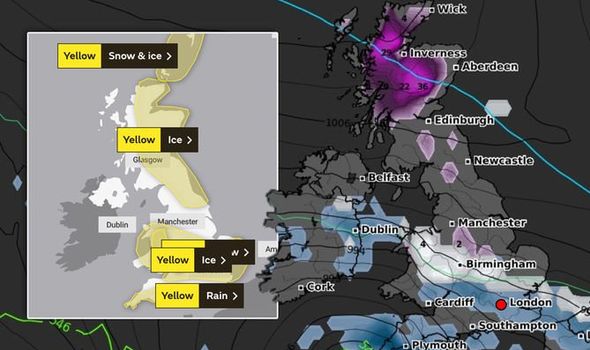 The warning will be in place from 8pm tonight and is due to last throughout the weekend until 11am tomorrow.

Elsewhere, another warning for snow and ice has been put in place over the Orkney and Shetland Islands.

The warning reads: ” Wintry showers will affect the Northern Isles from Saturday afternoon into Sunday leading to a risk of ice.

“Showers will mostly fall as snow across Shetland on Sunday morning with accumulations of a few centimetres possible in places.”