The Met Office has issued yellow warnings for rain and wind across parts of the UK today. The warnings come as the Met Office forecast a drop in temperature tomorrow, followed by heavy winds and rain on Friday.

A yellow rain warning has been issued for parts of Scotland, affecting some areas in Central, Tayside and Fife, Highlands and Eilean Siar and Strathclyde.

The Met Office warn approximately eight inches (200mm) of rainfall could be possible over higher ground, and the rain warning is in place until 3pm today.

The warning reads: “Rain will persist throughout Tuesday and into Wednesday, turning heavy at times, with heaviest rainfall over high ground.

“By Wednesday afternoon 50-100 mm of rain will fall widely with 150-200 mm possible in a few locations over high ground.” 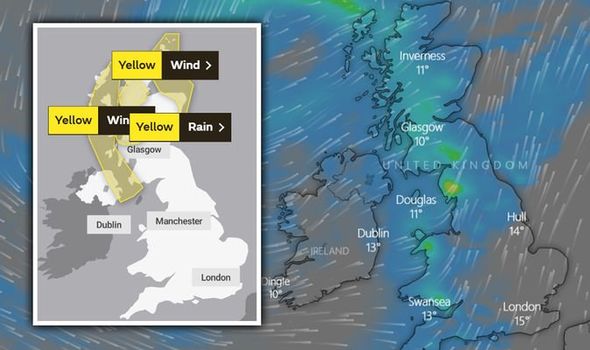 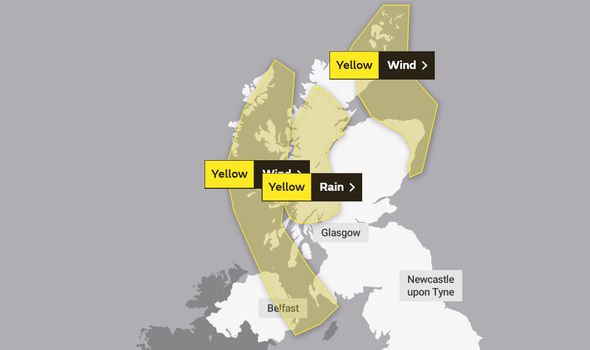 Wind warnings have also been issued for parts of northern and western Scotland, as well as areas in Northern Ireland.

The wind warning is active from 9pm today until 3am on Thursday morning.

The warning reads: “Winds are expected to strengthen for a time this evening and overnight.

“A swathe of stronger winds is expected to move southwards across parts of coastal Scotland and Northern Ireland and it is likely that some places may see gusts of 60 to 70 mph for a time.

“This may coincide with high tides leading to a greater potential for coastal impacts.”

Today a band of rain is moving eastwards across the UK, and colder blustier air mass is expected to follow with some organised rain and showers across the country.

Tomorrow is forecast to be a brighter day with some good spells of sunshine.

There will still be some showers around the western half of the UK, and snow is expected to fall over higher ground in Scotland.

Tomorrow high pressure is expected to build temporarily, which will cause the temperature to drop but clear skies are forecast.

General average temperatures have been 12 to 13C by day, but temperatures around 8 to 9C are expected on Thursday.

So far Met Office warnings have only been issued for Wednesday and Thursday, but blustery and wet weather is expected on Friday.

Met Office press officer and meteorologist, Bonnie Diamond, told Express.co.uk: “Later on Thursday night and into Friday we have another band of rain making its way across the country.

“So Friday looks like a cloudy and wet day for most, and blustery with strong southwesterly winds.”

This is a breaking story, refresh for updates.