The scorching weather seen this bank holiday weekend is expected to continue into next week as temperatures fall in line with the time of year at last. Following weeks of rain and thundery downpours, the sun has finally made its way out in the UK – just as lockdown restrictions are easing. For the second day in a row temperatures broke records on Tuesday as highs of 25.8C were recorded in Cardiff and Middle Wallop, Hampshire on the first day of the official summer period.

Met Office meteorologist Greg Dewhurst told Express.co.uk: “Today [Wednesday] is going to be the warmest of the rest of the week.”

Mr Dewhurst added: “Temperatures will remain above average throughout the week, with highs of 21 to 22C expected on Thursday.

“Into Friday, highs of 24 to 25C are expected, and next week is looking fairly similar with above-average temperatures for this time of year – the average being around 21C.”

While the warm weather is expected to continue on past Wednesday and throughout the end of this week for the vast majority of Brits, some unlucky regions have been hit by thunderstorms.

The Met Office put in place one yellow weather warning for Wales and south-west England on Wednesday morning, from 5am to 11am. 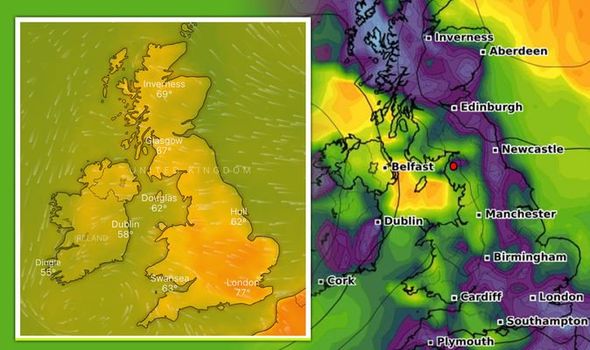 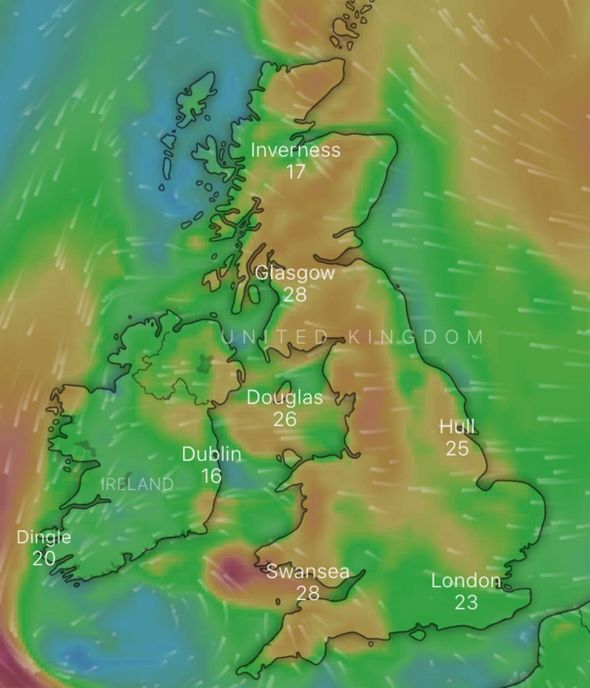 Met Office meteorologist Alex Burkill said: “The thunderstorms could bring lots of lightning, some hail as well as some heavy rain, and with the half term there is an increased number of tourists in this area.

“The thunderstorms do then push north-eastwards into the Midlands and across more of. Wales, but they also ease and break up, so these places will see some showers but they won’t be as intense.”

But Mr Burkill added Wednesday is still very likely to be hotter than Tuesday, with highs of 29C possible in some parts.

Looking ahead to Thursday, nationwide temperatures are expected to drop in some areas but there’ll continue to be fine and dry weather for most. 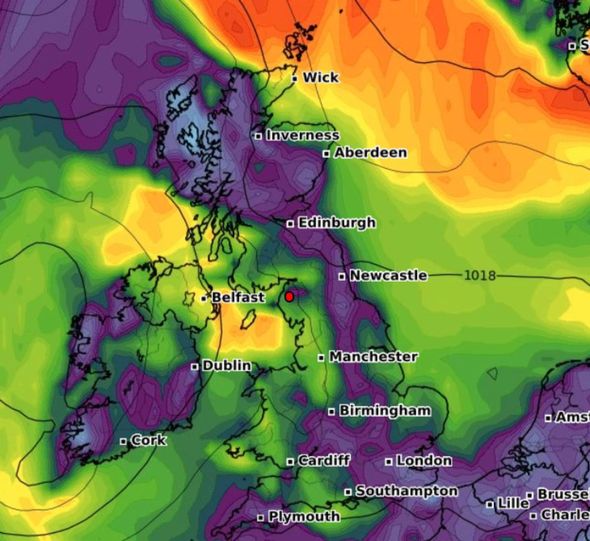 The outlook for Wednesday reads: “Very warm with a good deal fo sunshine for most, eastern coasts cooler with an onshore breeze and low cloud in the northeast.

“Cloudier in the south with showers and some thunderstorms possible, these moving into some central areas later.”

For Thursday, the outlook reads: “Showers across northern areas soon fading, then cloud breaking up to allow sunny spells.

“But scattered thunderstorms developing in some eastern parts of England where it will be very warm.”

Going into the weekend, temperatures are expected to stay nice and dry. 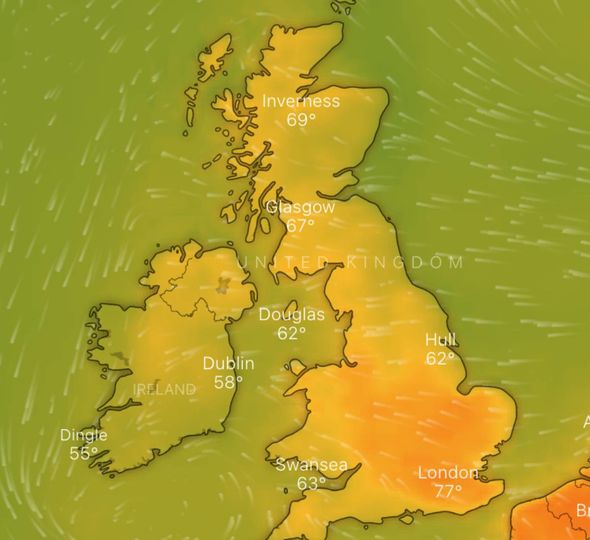 However, at this point the risk of thunderstorms moves across the country to the south east, but will largely be confined to the early hours.

The forecast adds: “Temperatures a little lower nationwide Friday, but recovering into the weekend.”

As the end of the month approaches, it’s as though drier and more settled weather will dominate across the UK.

ITV writes: “Temperatures should remain around average for June – so no real signs of any cold blasts like we saw during the spring, but something more typical for this time of year.

“Parts of the south and eats could see some warmer days as the tropical air spills in from the continent.”

The warm weather has been a welcome break for people following one of the wettest May months of recent years.

Heavy downpours and prolonged spells of rain became the norm for much of the UK. Wales experienced the wettest May on record since they began in 1862.

The country saw 245mm of rainfall, topping the previous record of 184mm set in 1967, according to the Met Office.

The UK as a whole saw its fourth highest amount of rainfall on record for the month of May, with a steep average of 120mm.

England, meanwhile, had its fifth wettest month on record and its wettest since 1967 with 111mm of downpours.