Forecasters from Met Office said areas of low pressure in the Atlantic and a rejuvenated jet stream are “sending weather fronts and showery conditions across the UK over the coming days”. Parts of the Pennines and Wales will be washed out by showers while it is expected to stay dry in the Southeast.

Meanwhile, people in the the North of the nation are warned to expect heavy rain at times, with a wet and breezy start to the weekend.

And southern Scotland and northern England has been warned to prepare for the “odd rumble of thunder”.

By Monday, forecasters said a “broad band of rain” would have moved eastwards, increasing the risk of thunderstorms. 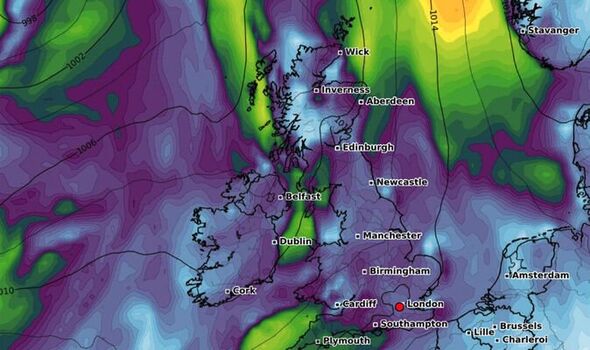 “After a dry start on Sunday cloud will build from the west as the next weather system approaches, bringing rain to Cornwall and then Northern Ireland by the end of the day. Temperatures will be down a little on Saturday, although, it will be more humid.

“A broad band of rain will move eastwards across the UK on Monday, it will be heavy in places with a risk of thunderstorms.” 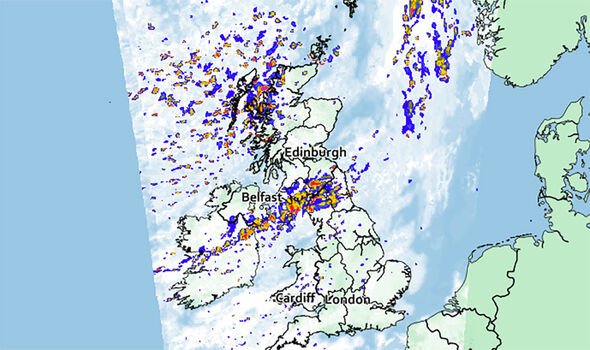 The weather forecast from the Met Office read: “A band of rain will move southwards across northern England, north Wales and the north Midlands, turning light and patchy. Clear spells and blustery showers across Scotland. Southern England mostly dry with variable cloud and clear spells.

And for Sunday forecasters added: “Sunny spells and scattered showers across Scotland, these becoming lighter. Showery rain across Wales, central and northern England becoming heavier later, with drizzle and coastal fog in the southwest.” 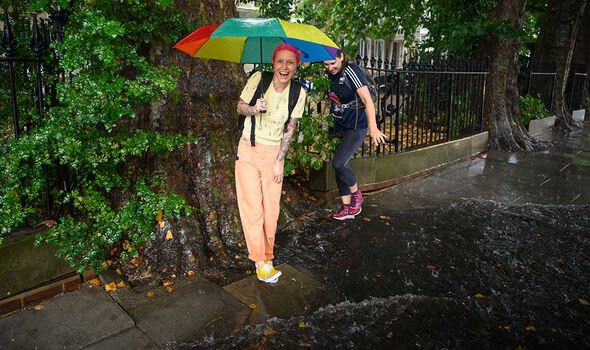 They said: “Overnight will be mostly dry with clear spells, however thick cloud cover will build in from the south-west and there is a chance of a few showers developing.”

And on Sunday, they said a thick cloud would cover would soon build from the south-west “bringing a chance of a few showers which may merge into longer spells of rain across England and Wales”.

They said: “Outbreaks of rain will push into the south-west during the evening. 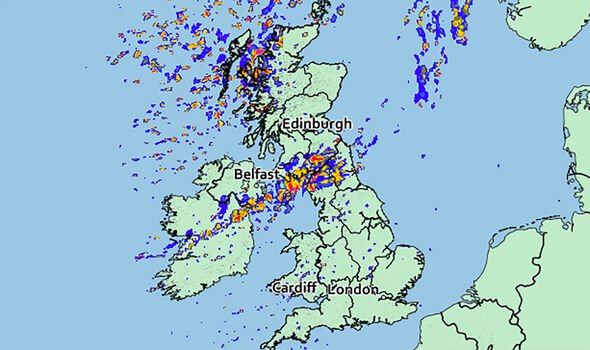 “Monday will start cloudy with outbreaks of rain which may be heavy but will to ease and turn increasingly showery during the day. Sunny spells will develop too. Some bright spells on Tuesday however there will also be large areas of cloud cover around and a threat of showers, mostly in the west.”

It comes amid an abrupt end to the UK’s heatwave and follows weeks of little rain, which has caused drought and left land parched.