Kerala minister says one man held for the death of the elephant which reportedly ate fruit filled with firecrackers. 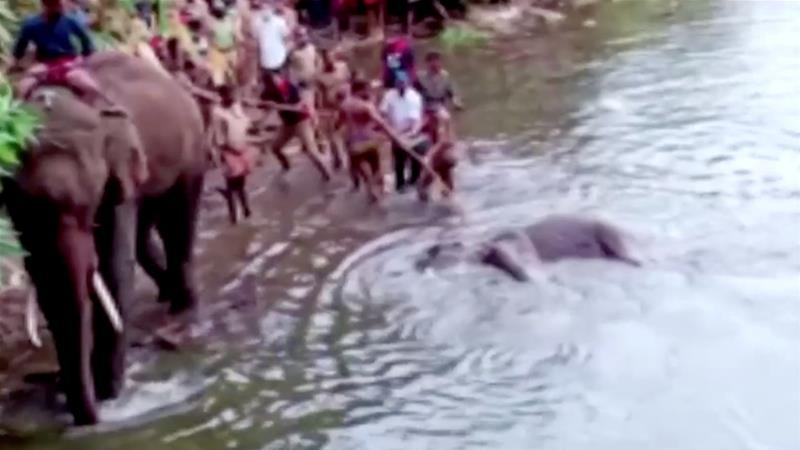 A man has been arrested in India’s Kerala state for his alleged involvement in the death of a pregnant elephant and others are being questioned, the state’s Forest Minister K Raju has said.

One man was arrested by a joint investigation team of police and forest departments in connection with the case, Raju said on Friday.

“There are more people involved. The investigations are continuing,” he told reporters.

“The forest department has appointed three teams for the investigation. Police also investigating the matter. Strict action will be taken so that a similar incident is not repeated.”

The death of the elephant, which reportedly ate a pineapple filled with explosives, led to widespread outrage and triggered a political controversy involving federal ministers.

A preliminary post mortem report indicated the elephant suffered injuries in its mouth and was not able to eat for days, Kerala’s chief wildlife warden Surendrakumar said.

“There is no evidence yet that someone deliberately gave a firecracker-laden pineapple to the elephant but we are investigating,” he said.

The elephant had strayed into a village in Palakkad district last month from an adjacent national park.

Explosives mixed with some edible substance are often left out by the residents in the area to protect their crops from wild boars and other animals.

The pregnant animal suffered severe injuries and eventually died standing in a river on May 27.

Images of it standing in a river with its mouth and trunk immersed in the water to relieve the pain surfaced on social media.

A post-mortem report quoted by the India Today network said the severe injuries in the elephant’s oral cavity most likely occurred following an explosive blast in its mouth.

“Severe debility and weakness in turn resulted in the final collapse in water that led to drowning,” said the report.

The elephant’s death turned into a political controversy after right-wing Bharatiya Janata Party (BJP) ministers made factually incorrect remarks, while their supporters tried to blame Muslims for the incident on social media.

The controversy forced Vijayan to flag a “hate campaign” over the animal’s death.

“[We] are saddened by the fact some have used this tragedy to unleash a hate campaign,” he posted on Twitter on Thursday.

“Lies built upon inaccurate descriptions and half-truths were employed to obliterate the truth. Some even tried to import bigotry into the narrative.”