Violence broke out in central Paris last night as French riot police were overrun by furious youths who forced the officers into retreat. Violent scuffles erupted when riot police attempted to break up an illegal rave in Bercy Park in the middle of central Paris. This comes as Paris and other major cities in France erupted in furious protests to mark May Day in the country.

The hundreds of young party-goers had broken a 6pm curfew and were seen breaching Covid restrictions.

The revelers, most of them maskless, were filmed dancing and drinking as May Day demonstrations sent shockwaves throughout the country yesterday.

Police officers fired rubber bullet guns and tear gas in an attempt to disperse the crowd.

The police also wielded batons and deployed police dogs in a desperate bid to take control of the situation.

JUST IN: Eurozone hit by double-dip recession as economy falters 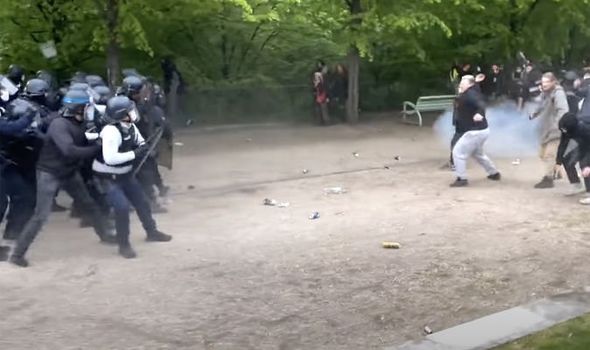 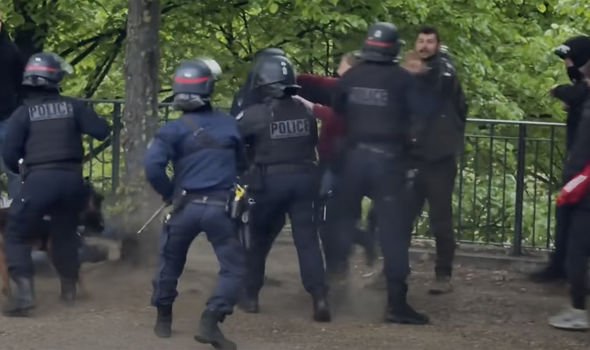 In return, the crowd of youths forced the police officers into retreat by hurling bottles, bricks, sticks and other projectiles at them.

At one point the police officers appeared to lose control, as protesters forced them back.

Three people were arrested, including the alleged organiser of the party who was placed in police custody, according to officials.

Emmanuel Macron was the target of much of the anger, with his rivals far-left leader Jean-Luc Melenchon and far-right leader Marine Le Pen attending May Day events.

Ms Le Pen, who is seen as the biggest challenger to Mr Macron, warned supporters of “total chaos” if Mr Macron is re-elected. 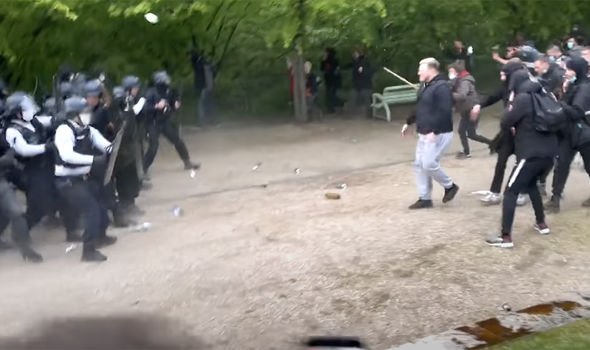 More than 106,000 people marched throughout France, including 17,000 in Paris, according to the interior ministry.

Police arrested 46 people on Saturday in Paris, where rubbish bins were set on fire and the windows of a bank branch were smashed.

Water canons and tear gas were deployed as authorities attempted to reimpose order in the city. 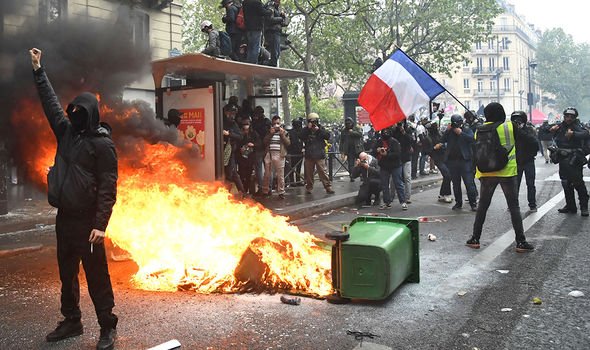 About 300 rallies were organised in cities including Lyon, Nantes, Lille and Toulouse.

The protests saw trade unionists join forces with members of the Yellow Vest movement, which triggered a wave of anti-government protests three years ago.

A pensioner named Patricia told AFP news: “There are so many motivations for a revolt that are building up – the management of COVID, the so-called reforms that are going to take away people’s ability to live, job-seekers who are going to lose their benefits.”