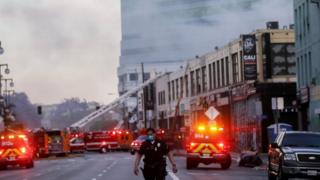 A blast at a hash oil factory in Los Angeles has injured 11 firefighters who were caught by a ball of flame as they worked to put out a blaze.

The fireball shot out of the building and scorched a fire engine across the street when the explosion happened at 18:30 on Saturday (02:30 GMT Sunday).

Some of the firefighters had to run through a wall of flames 30ft (9m) high and wide to escape, an official said.

Three are in a critical condition but all are expected to survive.

All 11 firefighters suffered burns ranging from minor to serious, and two have been placed on ventilators.

Some of them were on fire as they ran out of the building and they ripped off their protective equipment, leaving it on pavement along with melted helmets, Los Angeles Fire Department Captain Erik Scott was quoted as saying by the Associated Press news agency.

It appears that butane gas was being used in the process to extract a chemical from cannabis to create hash oil, a powerful concentrate.