Hundreds of thousands of people with mental illnesses are shackled and chained around the world, according to a Human Rights Watch (HRW) report.

The report, released to mark the World Mental Health Day on Saturday, said most people with mental health issues are held in overcrowded or filthy rooms, sheds, cages, or animal shelters and are often forced to eat, sleep, urinate and defecate in the same area.

Most of these patients are shackled by their families or communities; or the institutions into which they are placed for long-term care, according to the report.

Shackling is a rudimentary form of physical restraint used to confine people with real or perceived psycho-social disabilities. It can be done by using chains, ropes or rags.

According to HRW, shackling is mostly practised in non-medical settings, by families, a faith healer, or non-medical staff, often in the absence of support or mental health services.

Shackling mostly takes place in parts of Africa, Asia and the Americas which have high poverty rates and typically spend less than 2 percent of their annual budgets on mental health, according to HRW.

Of the 60 countries the report cites, 24 are in Africa. Forty-eight of them are developing nations, including some of the world’s poorest countries such as Liberia, Mozambique, Sierra Leone and Yemen.

Decades of conflicts in these countries have given rise to large numbers of people suffering from mental issues. But because their support systems and social safety nets are weak, their families often turn to cultural and religions institutions for help, the rights group said.

“If people do not get support from the state, it leads to a situation where people are shackled or chained because relatives or families have no way of accessing mental health services,” Michael Njenga, executive director of Users and Survivors of Psychiatry in Kenya, told Al Jazeera.

“People are often left with no option but to lock people [up] so they can look for food or look after their children,” says Njenga.

Aoife Nolan, professor of international human rights law at the University of Nottingham, told Al Jazeera the HRW report raises huge concerns, particularly because it threatens the liberty and security of the mentally ill and exposes them to torture, and inhuman and degrading treatment.

“Crucially, it demonstrates a failure on the part of many governments to secure the right to the highest attainable standards of physical and mental health for people with mental health conditions,” she said, adding that 171 United Nations member states have signed the International Covenant on Economic, Social and Cultural Rights.

According to HRW, the lack of proper access to sanitation or even basic healthcare mean people who are shackled are also at greater risk of being infected with COVID-19. 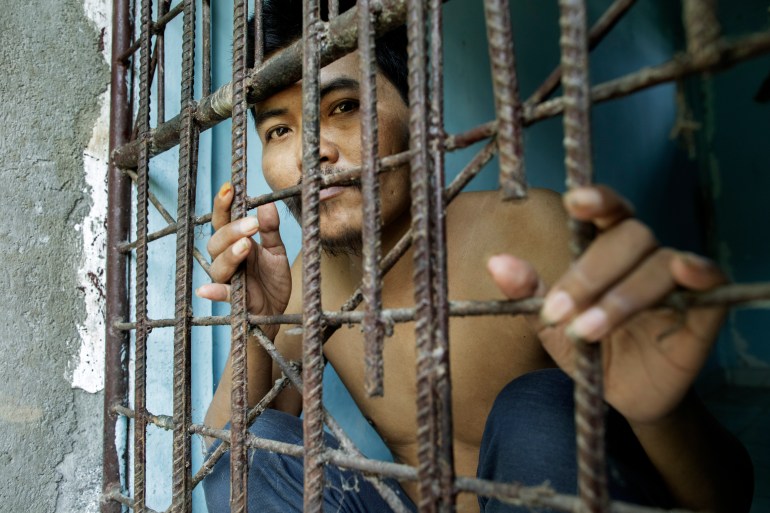 Made has spent two years locked in a purpose-built cell on his father’s land in Bali, Indonesia. His father, who continues to farm at the age of 94, says he had no choice but to chain his son. [Andrea Star Reese/HRW]The rights group documents the case of Sodikin, a 34-year-old Indonesian man with a psychosocial disability who has remained shackled for more than eight years in a shed outside his family home in West Java.

Shackling is not just confined to adults. According to the World Health Organisation (WHO), one in every five children globally suffers from mental illness.

Aisha, whose 18-year-old daughter in the besieged Gaza Strip has psycho-social illness, told HRW they keep her chained from morning until evening.

“She can’t use the toilet. She wears diapers all day … We have to chain her, otherwise, she will take off her clothes and diapers,” said Aisha.

According to the WHO suicide is the third leading cause of death among children aged between 15 and 19 globally. Health experts say poverty, sexual violence, forced migration, substance abuse and early pregnancy as causes for adolescent healthcare problems.

The shame and stigma attached to people with psychosocial disabilities remains a widespread problem.

“In Ghana, the government has called for a ban on shackling. Years later, the practice continues. The rhetoric does not match the realities.”

Shackling is particularly prevalent in West Africa. Huawei Ojeifo, who herself suffers from mental illness, is the founder and executive director of She Writes Women, a women-led movement in Nigeria.

Ojeifo told Al Jazeera Nigerians are “unaware” of mental health and how to address the issue.

“Nigerians are usually very religious, but at the same time there is a lot of ignorance about mental health. The media, music and film industries also need to sell the stories about mental health from a more informed and humanising perspective,” says Ojeifo, who is at the forefront of advocating for new legislation on mental health in her country. 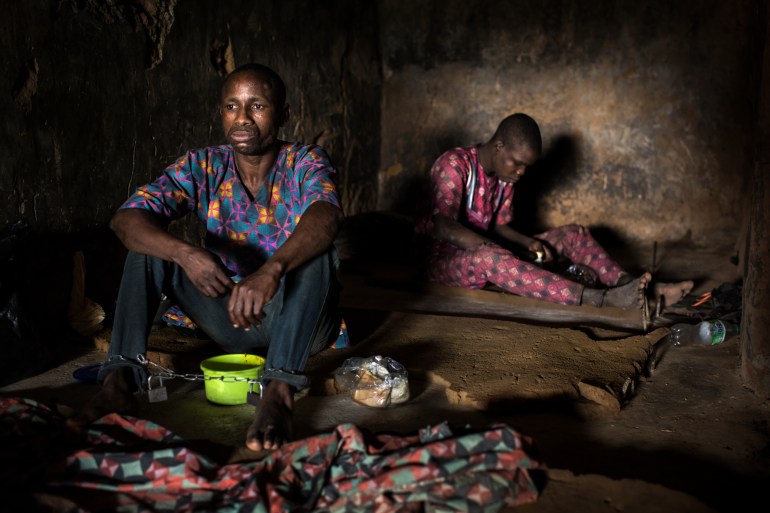 Hundreds of thousands of people with mental illness remain shackled and chained around the world, according to the HRW [Robin Hammond/HRW]Benjamin Ballah is a Liberian mental health activist who was chained in a “spiritual healing centre” in Monrovia in 2003 for nearly a year.

“If you have been chained, life becomes meaningless to you. You are no longer treated as part of society, you feel all is lost,” he said.

Ballah says the stigma attached to mental illness is reinforced by cultural and religious beliefs, with certain churches and spiritual centres spreading the view that the mentally ill are “possessed by demons”.

The report further says the governments should immediately order inspections and regular monitoring of state-run and private institutions and take appropriate action against abusive facilities.