Ms Harris, the first Black and Asian-American to hold the office of US Vice President, greeted Barack and Michelle Obama with a double fist-bump, prompting a stream of tweets from viewers. When footage of the moment emerged, some Twitter users logged onto the social media platform to mock the Vice President’s gesture, while other expressed confusion.

One person said: “I ain’t ever seen this two-handed fist bump business before.”

Another commenter asked: “Why was this fist bump weird? Hahaha.”

A third person said: “People be impressed by absolutely nothing.”

However, other users were moved by the reaction, labelling it an “historic” moment. 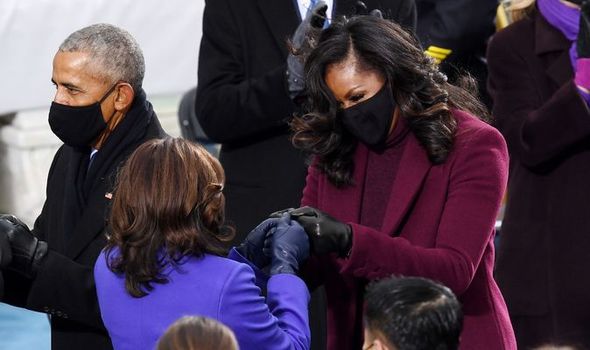 One user wrote: “There is not enough love for this moment in history.”

Another added: “I don’t think we realise how historic this photo is gonna be.”

A third user said: “We are entering the next chapter of American leadership with the inauguration of Joe Biden and Kamala Harris.

“Right now, I’m feeling more than just relief at putting the past four years behind us. I’m feeling genuinely hopeful for what’s to come.”

The news comes after the Vice President was accused of ordering a Democratic Party staffer to get to his feet on her entering the room.

In a 2018 Vogue profile, journalist Abby Aguirre gave her account of a situation in which Ms Harris conveyed “an air of celebrity” as she demanded a staffer stood up.

While at her Hart Senate Office Building in Washington, a group of congressional staffers had gathered to meet the “Democratic star”.

The staffers all stood up but for one, who Ms Harris ordered to get to his feet immediately. 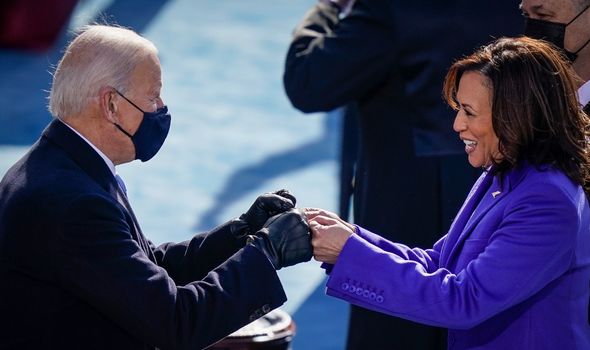 Ms Aguirre wrote: “Harris has an air of celebrity that, under normal circumstances, a freshman senator wouldn’t have had time to acquire. But this year has been anything but normal.

“She greets the 20-somethings as though they’re relatives at a family reunion: ‘Hi, everybody! Hi, guys!’

“Then she notices that one of the staffers is still seated, and her voice drops a full octave: ‘Stand up, man!’”