But Israeli Prime Minister Benjamin Netanyahu claimed his nation could conquer Hamas ­militants as the international clamour for a ­ceasefire grows. Hundreds of people have been killed, including dozens of children. Iran yesterday said it supports the Palestinian people after claims it is enabling Hamas militants to fire ­rockets at Israeli targets.

The White House said: “The president conveyed to the prime minister that he expected a significant de-escalation on the path to a ceasefire.”

Mr Biden has repeatedly said Israel has the right to defend itself while rockets are fired from Gaza.

Mr Netanyahu said of Hamas: “There are only two ways that you can deal with them.

“You can either conquer them, and that’s always an open possibility, or you can deter them. We are engaged right now in forceful deterrence, but we don’t rule out anything.”

Israel is also targeting militant leaders, including the chief of the military wing of Hamas. 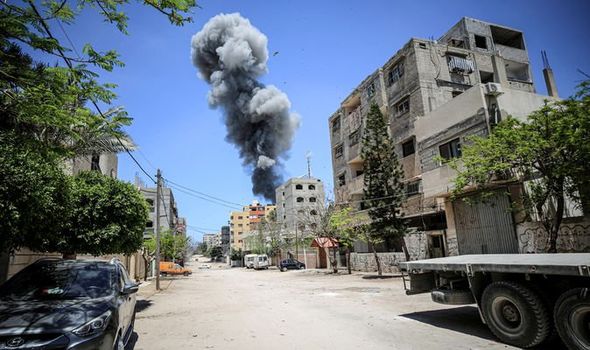 The bloodshed continues to take a heavy toll on civilians. Standing among the wreckage of besieged Gaza, Nadeen Abed al Lateef, 10, said: “Every day I see someone die or I see ­someone who is scared.

“I feel horrible that we have to live like this. Kids maybe died in here. We are literally trying to live in rubbish.”

Israel’s military says its artillery has attacked “a number of targets in Lebanese territory,” in response to rocket fire from within the country.

Tel Aviv said four rockets were launched: one was intercepted, and another landed in a field. Two more landed in the Mediterranean.

Mahmoud Abbas, president of the Palestinian Authority, has accused Israel of carrying out “organised state terrorism and war crimes” in Gaza.

He said the matter would be ­pursued in international courts.