For more than a decade, the British spirits writer Jim Murray has held sway as the world’s most influential whiskey critic, thanks largely to his “Whisky Bible,” an annual compendium of thousands of reviews, including his prestigious World Whisky of the Year award. His words can make or break a brand, his books have sold more than a million copies, and his tasting events, which take him from Kentucky to India to points in between, attract thousands of fans.

He is sometimes compared to Robert M. Parker Jr., the prominent wine critic, but that’s not quite right: The wine world is full of voices other than Mr. Parker’s; with whiskey, nothing comes close to the power of a Jim Murray review.

Among whiskey connoisseurs, though, Mr. Murray, 62, has long been a controversial figure. Some distilleries and retailers have quietly refused to carry his books or use his reviews for promotion, saying that he shows a sexist and demeaning attitude toward women in his reviews and at public events. In the 2017 edition of “Jim Murray’s Whisky Bible,” for example, he likened a single-malt Scotch to “a 40-year-old woman who has kept her figure and looks, and now only satin stands in the way between you and so much beauty and experience … and believe me: she’s spicy.”

Now, those accusations have burst into the open. On Sept. 20, four days after Mr. Murray published the 2021 edition of the “Whisky Bible” in Britain, a whiskey journalist in England named Becky Paskin wrote a lengthy post on Instagram and Twitter saying that dozens of the reviews in the book contained sexist language; later that day, Felipe Schrieberg, a writer for Forbes, published an article making similar allegations.

The reaction was swift. Several major whiskey brands issued statements denouncing Mr. Murray. The Whisky Exchange, one of Britain’s most prominent retailers of spirits, said it would no longer carry his book. Beam Suntory, the company that makes Alberta Premium Cask Strength, Mr. Murray’s world whiskey of the year for 2021, said it would no longer cite the award in its marketing. And Ms. Paskin says she has been inundated with emails from women recounting their own experiences with sexism and harassment in the whiskey industry. 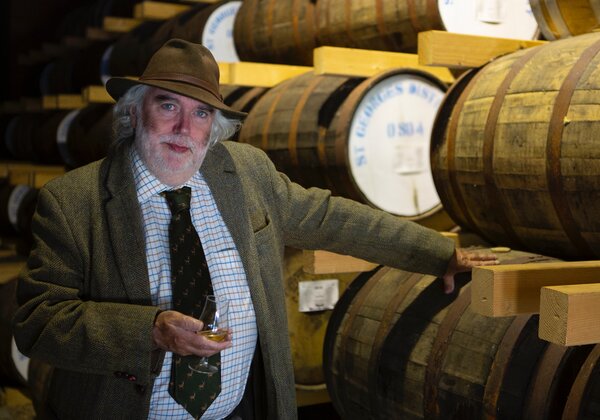 “I was angry that a book so highly regarded by the industry could be so sexist in its language,” Ms. Paskin said. “But honestly, I wrote my post as a question, not a campaign. I did not expect the reaction it has gotten. It’s been surreal.”

In an email on Wednesday, Mr. Murray denied that his books or public events were sexist; rather, he said his approach is meant to evoke the tactile experiences of drinking whiskey. “It is to do with sensuality,” he wrote. “All foods and drinks are sensual.”

The uproar comes as the whiskey world is undergoing rapid change. Long seen as a “gentleman’s drink,” whiskey is increasingly popular among women, just as they have begun to climb the industry’s ranks as executives and distillers. Yet it continues to be marketed primarily to men, while women in the business — bartenders, brand ambassadors, distillers — tell of being constantly demeaned and harassed.

“Stories of sexist remarks, sexual comments and instances of inappropriate behavior from consumers are often spoken about among people in the industry, but always behind closed doors,” Ms. Paskin said. “Now some women are feeling empowered to talk about their experiences publicly.”

Ms. Paskin, 37, who helped found an organization called Our Whisky, dedicated to making the industry more inclusive, said she wasn’t planning to go after Mr. Murray when she got a call from Mr. Schrieberg on Sept 17. He had seen one of the reviews from the latest edition of the “Whisky Bible,” in which Mr. Murray used overtly sexual language to describe an Indian whiskey — “The end of the experience is like after you have just made love and you are unable to speak” — which struck him as odd. He got an electronic copy of the book and began to search through it.

“I hit control-F for ‘woman,’ and all of a sudden I could see, he does this a lot,” Mr. Schrieberg said. Together with Ms. Paskin, he documented scores of similar references, many comparing whiskey to women, often in sexual terms.

“If whisky could be sexed, this would be a woman,” Mr. Murray wrote in his 2021 edition about a single-malt Scotch made by Glenmorangie. “Every time I encounter Morangie Artisan, it pops up with a new look, a different perfume. And mood. It appears not to be able to make up its mind. But does it know how to pout, seduce and win your heart …? Oh yes.”

Describing a bottle from the Famous Grouse, a blended Scotch, also in the 2021 edition, he wrote, “The texture is silk normally found on the most expensive lingerie, and as sexy as who you might find inside it.”

In perhaps the most forceful expression of concern, Sukhinder Singh, an owner of the Whisky Exchange, explained why he had decided not to carry Mr. Murray’s book, saying in a statement: “We’ve thought a lot about this topic and do not feel that the comments made in the book sit well with our vision of the whisky community,” adding, “We feel passionately about making whisky a spirit that can be enjoyed by everyone, and the language used in the ‘Whisky Bible’ runs counter to this business ethos.”

Mr. Murray defended the passages from his books that have come under fire, saying that they occur only rarely, that they are even more rarely gendered, and that when they are, they are usually drawn from his own experiences. “The reference is likely to be either a coded message to a girlfriend, or even ex-girlfriend whom I know will be reading the ‘Bible’ — and whom I’m still on close terms with,” he wrote.

But Mr. Murray’s choice of words is only part of his problem — several people in the industry also cite his behavior. Andrew Ferguson, the owner of the Kensington Wine Market in Calgary, Alberta, said he stopped carrying the “Whisky Bible” after an event he attended where Mr. Murray singled out a woman in the audience and asked the crowd to imagine her naked, as a way of making a point about a whiskey.

David Vitale, the owner of Starward, an Australian distillery, said that a similar event persuaded him not to send Mr. Murray samples of his whiskey or to carry his book at his distillery. “In my mind, Jim Murray doesn’t exist,” Mr. Vitale said.

At an event in 2014 at the Manhattan headquarters of Caskers, an online spirits retailer, Mr. Murray discussed his tasting method at length, including his decision whether to spit or swallow the whiskey. He then pointed to a woman in the crowd and asked which she preferred — to spit or to swallow — in a tone, according to four witnesses, that made the sexual double entendre clear.

While Mr. Murray said he did not recall these specific events, he conceded that he singles out both female and male attendees for such treatment — usually with their prearranged consent. He said he has never received complaints.

“Memorably, once a lady actually started taking her cardigan off and I had to stop her from taking the display further,” he wrote. “If I have offended anybody, at Caskers or anywhere else, then I apologise with heartfelt sincerity.”

He added that he no longer includes overtly sexual language at his tastings. “Everything evolves,” he said. “Today my tastings are still fun and unique but models of restraint.”

For many women in the industry, Mr. Murray’s behavior is merely an indicator of a more pervasive problem: the longstanding, gendered assumptions about who drinks whiskey, who counts as an expert and whether men’s dominance gives them license to engage in sexist and abusive behavior.

“It’s been a long time coming,” said Heather Greene, an owner of Milam & Greene, a distillery in Texas. “It was only a matter of time before people started saying: ‘This doesn’t work for me. I don’t see myself in this, and it makes me uncomfortable.’”

Whether or not the corporations that dominate the industry will follow their denunciations of Mr. Murray with meaningful change remains to be seen — and there is some concern that he will be made a scapegoat, diverting attention from a deeper, more uncomfortable engagement with sexism in whiskey.

“I’ve seen a lot of suppliers jump on the bandwagon, but there’s no one to hold them accountable,” said Amanda Victoria, the founder of the drinks company Siponey and the former communications director for the Scotch Malt Whisky Society. “I’ve seen them do this same song and dance, and nothing gets done.”

But Ms. Paskin and Ms. Greene said they are optimistic about the industry’s ability to adapt, if only because demographic changes will force it to become more inclusive.

“I hope that in the future it’s just as normal for a woman to walk into a bar and ask for a whiskey as often as they do a beer, and not have anyone ask, ‘Is that too strong for you?’” Ms. Paskin said.