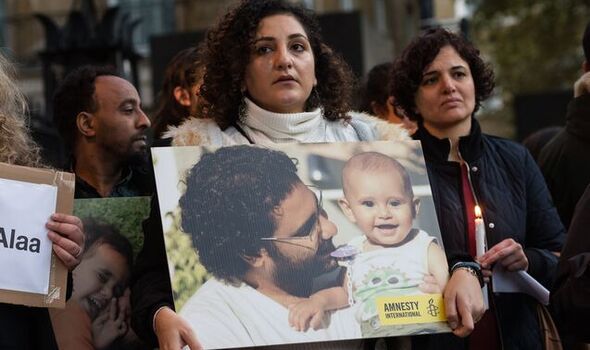 Activist Alaa Abd El-Fattah, who has been on hunger strike for more than 200 days, could have “hours to live” after moving to a water fast. Amnesty International warned “time is running out” for the 40-year-old British-Egyptian jailed in Egypt after he stopped accepting any calories or water.

He said: “Really it is a matter of hours. There is no time for him for half-measures.”

An activist and writer, Mr El-Fattah has spent much of the last decade behind bars. He rose to prominence during the 2011 Arab Spring and is currently serving a five-year sentence for “spreading false news”.

Amnesty International labelled his trial “grossly unfair” and declared him a prisoner of conscience, “solely targeted for [his] activism”.

He was granted British citizenship in 2021, which gives him the right to consular visits from British officials, but this right has been refused. He began a hunger strike in protest on April 2nd.

Mr Baoumi said in normal circumstances an individual may survive without food and water for one week.

“In Alaa’s circumstances however [we are] extremely, extremely, extremely concerned that with a long hunger strike that he has been on and the fact he stopped eating any calories earlier this month it could be less than one week. So it’s really a matter of hours.”

Mr El-Fattah subsisted for much of his hunger strike on 100 calories a day, but moved to a zero-calorie fast last week. On Sunday, the first day of Cop27, he stopped drinking water.

Rishi Sunak wrote to his family promising to raise the issue with Egyptian leadership while in the country for COP27. He wrote: “I will continue to stress to President Sisi the importance that we attach to the swift resolution of Alaa’s case, and an end to his unacceptable treatment.”

He added: “I appreciate this must be an extremely painful time for your brother and the whole family; he remains a priority for the British government, both as a human rights defender and as a British national. Ministers and officials continue to press for urgent consular access to Alaa as well as calling for his release at the highest levels of the Egyptian government.”

“He needs to be quite vocal and public about the Egyptians’ responsibility to release Alaa Abd El-Fattah and he would be held responsible for failing to release him leading to his death.”

He said international leaders also need to make it clear to Egyptian president Abdel Fattah el-Sisi that if Mr El-Fattah dies, it will cast a “long, long shadow”.

The summit is already dominated by the case, and his release would mean leaders can focus their attention on the climate crisis, he said.

The fight for freedom is also for the thousands of others behind bars in Egypt for peaceful protest, he said.

Mr El-Fattah’s sisters Sanaa and Mona Seif staged a sit-in outside the Foreign Office in Whitehall in the run-up to Cop27.

Sanaa Seif told Sky News she feared her brother would die while Mr Sunak is in Egypt for Cop27.

She said when she last saw him in August, he “already looked very, very frail” and “his eyes were sunken”.

Ms Seif warned that by the next time she is able to see Mr El-Fattah on 16 November, it could be “too late”.