Ocean Viking allowed to dock in Sicily on Monday after being stranded at sea with 180 people rescued in late June. 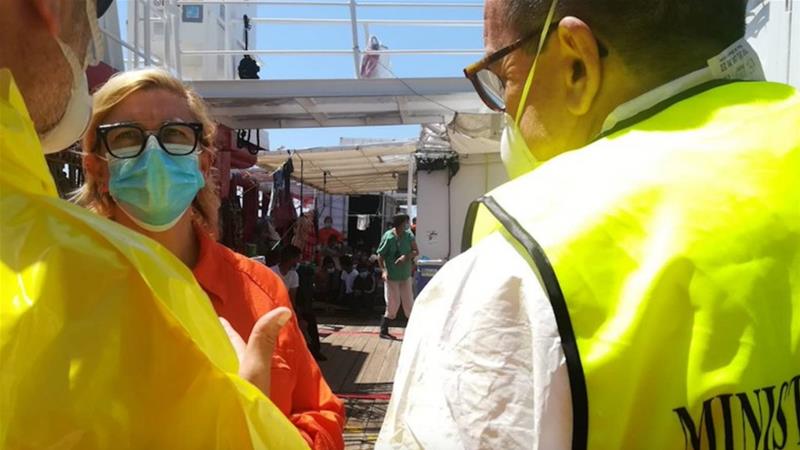 A humanitarian rescue ship stranded in the Mediterranean for days has “finally” received instructions to sail to an Italian port, so the 180 migrants on board can be disembarked.

In a social media post on Sunday, SOS Mediterranee also described “relief on the #Ocean Viking” when the ship’s crew and passengers learned that the rescued migrants are to be disembarked on Monday at Porto Empedocle in Sicily.

Earlier, the group said Italian medical staff came on board to test for the coronavirus disease, also known as COVID-19.

The migrants had been rescued by the Ocean Viking in four separate operations from Libya-based human traffickers’ unseaworthy boats between June 25 and June 30.

The migrants include Pakistanis, North Africans, Eritreans and Nigerians. At least 25 of them are minors, most of whom are unaccompanied. There are also two women, one of them pregnant.

After pleas to Malta and Italy for docking permission failed, many of the migrants aboard grew increasingly desperate, and six of them tried to kill themselves out of fear no country would take them in, SOS Mediterranee said on Friday.

Two of the six had jumped into the sea and were saved by crew members, the charity said.

There are concerns the arrival of summer and more favourable conditions at sea may lead to an increase of attempts to cross the Mediterranean.

Despite diplomatic efforts by EU authorities in Brussels to encourage countries to share the burden of caring for some of the asylum seekers, only a handful of member nations have agreed on a voluntary basis to accept some of those rescued.

Early in the coronavirus pandemic, Italy declared its ports unsafe for docking by private rescue ships as it sought to contain its devastating COVID-19 outbreak.