Footage shows a large residential building collapsing in Gaza which was part of an Israeli retaliation as reports say air raid sirens and explosions are heard in Tel Aviv following the building’s collapse. Israeli forces fired warning shots ahead of the attack to warn those nearby to vacate the area with hostilities between Palestinian militants and Israeli armed forces getting worse as the two sides clashed at Jerusalem holy sites. Gaza, controlled by Hamas, launched several rockets towards Israel earlier this week which has forced Israel to react with their own airstrikes which have killed at least 28 Palestinians.

Hundreds were left injured during clashes in Jerusalem earlier this week as Israeli police and Palestinians clashed at the holy Haram al-Sharif in East Jerusalem.

The area is sacred to both Israelis and Palestinians with Hamas urging Israeli police to be withdrawn from the area.

Clashes erupted with footage showing police and Palestinians clashing including one video of a Muslim being kicked on the ground while praying.

Tensions have been building in the weeks prior as Israeli developers have been more forceful in displacing Palestinians after setting up more settlements around the region.

Palestinian militants have fired 400 missiles towards Israel since Monday with at least two Israelis killed.

Israel responded with airstrikes of their own which targetted over 150 sites.

Recent footage shows the 13-story building collapsing but with no casualties yet reported. 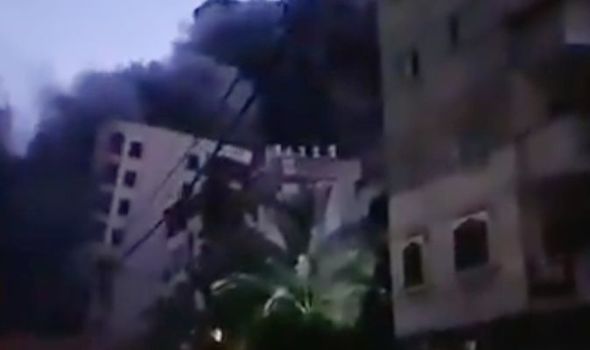