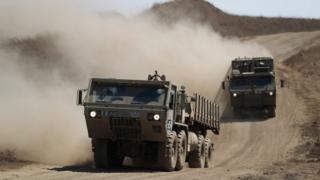 The Israel Defense Forces (IDF) said it was retaliation for a bombing attempt.

The IDF said earlier it had killed four men planting explosives near the Israeli-occupied sector of Golan Heights late on Sunday.

Surveillance footage showed the group engulfed in an explosion.

Military spokesman Lieutenant-Colonel Jonathan Conricus said it was too soon to say if the men belonged to a specific organisation, but that Israel held “the Syrian regime accountable”.

“The IDF holds the Syrian government responsible for all activities on Syrian soil, and will continue operating with determination against any violation of Israeli sovereignty,” the statement added.

Syria’s official news agency Sana reported that the Syrian army had activated its air defences late on Monday against “hostile targets” near the capital Damascus.

Meanwhile, the Syrian Observatory for Human Rights said that dawn air raids on the city of Boukamal, near the Iraqi border in the northeast, had killed 15 people.

Tensions have been rising between rivals Israel and Syria, particularly along Israel’s northern frontier, since an apparent Israeli air strike killed a Hezbollah fighter in Syria two weeks ago.

Israel had anticipated that the Iranian-backed Lebanese group would retaliate.