Israel bombed Palestinian militant weapons sites in the Gaza Strip in response to violent demonstrations at the perimeter fence, the army said.

Israel Defense Forces said on Twitter that one border security officer was critically injured by live fire after clashes erupted on Saturday.

Hundreds of Palestinians took part in a demonstration organised by Hamas to draw attention to an Israeli-Egyptian blockade of the territory. But it grew violent after dozens of people approached the fortified perimeter fence, throwing rocks and explosives toward Israeli soldiers.

According to the Gaza health ministry, 24 Palestinians, including a 13-year-old, were injured by gunfire.

Israel’s army said in a statement that fighter planes hit “four weapons and storage manufacturing sites” belonging to Hamas and that the military has deployed additional troops to the region near the border with the Palestinian enclave.

There were no immediate reports of injuries following the airstrikes.

The violence follows Israel’s announcement that Qatar will resume aid payments to Gaza, a move seen as boosting a fragile truce after May’s fighting. 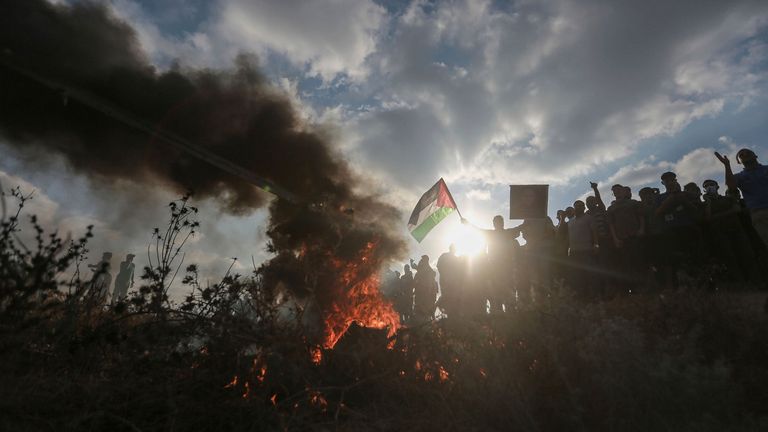 Just days before the announcement, Gaza militants launched a rocket towards Israel that was shot down by its Iron Dome anti-missile system, in the first such attack since the ceasefire.

At least 250 Palestinians and 13 people in Israel were killed during the violence that lasted over 10 days in May.