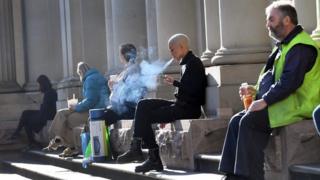 Australia has been hailed as a global success story in suppressing the spread of Covid-19.

The virus did not take hold as feared because of quick shutdown measures, including border closures and the mandatory quarantine of travellers.

Australia has reported just over 7,400 cases, far fewer than many nations. It has seen 102 deaths – the last was a month ago.

Since May, the country has entered a phased exit from lockdown restrictions as the curve flattened.

But in the last week there’s been a rise in cases in Victoria, mostly in the state capital Melbourne.

Concern has crept back into public conversation: Is this a small setback, or could it be something more sustained?

He said the virus had been effectively eliminated in many parts of the country. Even the most populous state, New South Wales (NSW), which includes Sydney, had not reported a local transmission in weeks. That remains the case.

But Victoria’s situation has worsened since then – an average 18 new infections were reported each day last week. About half are thought to involve clusters, particularly transmissions between family members and quarantine staff.

Prof Brett Sutton, Victoria’s chief health officer, said the state had seen “very low” levels of community transmission since February, but this was now “re-emerging because people are not doing things as stringently as they might have done a month, two months ago.”

How bad are the numbers?

This is the greatest increase Australia has seen in two months, but it remains well short of the peak in March.

There are now over 100 active cases in Victoria, mainly contracted in the past fortnight. In late March there were over 100 new cases being reported every day.

At that time, several hundred people with the virus were in hospital, and daily infections were climbing by about 25%.

On Monday, that rate was at 0.4% and there were nine people being treated in Victoria’s well-prepared hospitals.

Testing is also rigorous, widespread and accessible to anyone with even mild symptoms.

Australia’s numbers continue to sit well below many nations. Globally, about 183,000 new global cases were reported in the 24 hours to Monday, the World Health Organization (WHO) said.

How are Australian authorities responding?

The Victorian government has brought back tougher restrictions and extended a state of emergency until 12 July.

They have also zeroed in on six suburban “hotspots” – all in Melbourne. Fifty-person medical teams have been dispatched to trace over 1,000 contacts of patients and expand testing. If numbers increase, residents may be forced back into localised stay-at-home orders.

Health officials blamed much of the problem on family gatherings, allowed since April, where “hugging and kissing” had occurred against official advice.

Victoria has now reduced a 20-person limit in households to five, and delayed further easing restrictions for pubs and restaurants.

The Australian Football League (AFL) called off one match after a player tested positive on the weekend.

Despite concerns that a Black Lives Matter rally held in the city two weeks ago could contribute to the increase, health officials have said there’s no evidence that new cases were acquired there.

How is the rest of Australia responding?

Other states have reported very few, if any, cases in the past month.

Many had already expressed reluctance about opening their borders to Victoria and NSW, which have seen the most infections. The latest spike is likely to lead to further delays, some premiers have signalled.

On Monday, NSW told its residents to reconsider travelling to hotspots in Victoria.

While Victoria’s cases make up a quarter of the national total, NSW has closer to a third. When asked by reporters why local transmission had not been a greater problem there, Dr Murphy suggested it was “good luck”.

How great is a ‘second wave’ risk?

When restrictions were first eased in May, health officials warned it would be almost impossible to avoid having some further outbreaks.

They say they are confident they can prevent a second wave if they can get on top of clusters quickly.

Australia’s success has consistently been attributed to its strong public health response. It remains in an enviable position of being able to target outbreaks while they’re still relatively confined and small in number.

“It’s still too early to say how the Victorian outbreaks are going, but they are throwing every resource at this,” Dr Murphy told reporters on Monday.

He said a second wave was when “the outbreak is such that you don’t think the public health measures can easily control it in the short term”.

A concern would be a leap of several hundred cases – a level far above the few dozen seen so far.

“The early signs are that it is not escalating at the moment, [but] we have to make sure it is brought under control,” Dr Murphy said.

“I have great confidence in the Victorians’ response on this.”

Reporting by the BBC’s Frances Mao