The British embassy said the blast targeted an embassy convoy on the airport road, close to the Umm al-Tabool Mosque in Baghdad on Tuesday morning.

There were no injuries and no one immediately claimed responsibility for the bombing. 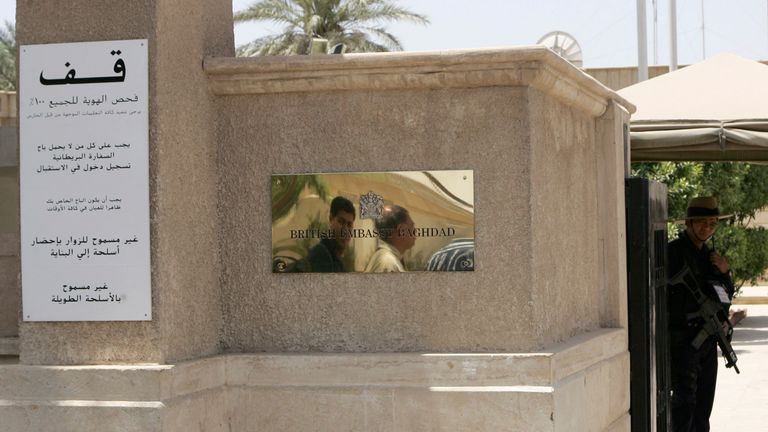 “The safety and security of our staff is of paramount importance and we are in close touch with the Iraqi authorities,” said a statement from the British Embassy.

The area of the attack, between the airport and the heavily fortified Green Zone, are often used by diplomatic missions, an Iraqi official said.

The attack is the first in months to target a diplomatic convoy and comes amid near daily rocket attacks aimed at the Green Zone and Iraqi army bases hosting U.S. troops.

It follows a rocket attack on US and British buildings at 1am.

Two Katyusha rockets landed inside Baghdad’s heavily fortified Green Zone, which houses government buildings and foreign missions, but caused no casualties or damage, the military said in a statement.

Rocket attacks against US targets have increased over the past few weeks.

Iran has not directly commented on the incidents but little-known groups believed to be connected to Iran-aligned
militias have claimed responsibility some attacks.

Iraq, often the scene of spillover violence from U.S.-Iran tensions, seeks to avoid being drawn into any regional conflagration.

Iran-aligned militias have sworn to avenge their deaths.

The US military has announced that 2,200 of its troops will be withdrawing from Iraq this month.

The US has around 5,200 troops in the country that were deployed to fight the Islamic State militant group.

In June, the US and Iraq affirmed their commitment to the reduction of troops in the country, with no plans by Washington to maintain permanent bases or a permanent military presence.

The rocket attacks surged at an alarming pace when Prime Minister Mustafa al-Kadhimi traveled to the U.S. last month to conclude strategic talks.

They have put pressure on his administration, which has promised to stop armed groups acting outside of state authority.