The Atlantic hurricane season begins on June 1, however, meteorologists have spotted a system developing off the coast of the southeastern United States. This system is expected to develop into a named storm, with the water in the Atlantic warm enough to trigger development.

A named storm has formed before the official start of hurricane season each year since 2015, with 2020 looking to follow that pattern.

According to AccuWeather meteorologists, a system is beginning to churn near South Florida on Friday and is forecast to strengthen into a subtropical or tropical system offshore of the Southeast coast this weekend.

If the system develops into a named storm it will be called Arthur, with names for systems decided alphabetically. 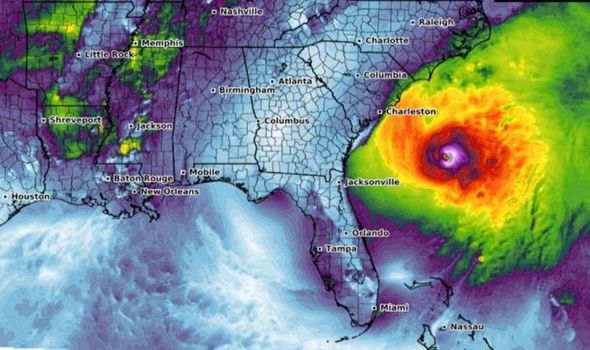 On Monday, locally gusty winds and heavy rain could hit Bermuda, but Mr Kottlowski said damaging winds are not expected.

Forecasters predict the track of the system should see the Northeast US avoid downpours, but another storm arriving from the Midwest will soak the region instead before this stalls in the East next week.

The National Hurricane Center (NHC) said: “A trough of low pressure located over the Straits of Florida continues to produce disorganized shower activity and gusty winds across the Florida Keys, portions of southeast Florida, and the northwestern Bahamas.

“Gradual development of this system is expected, and it will likely become a tropical or subtropical storm on Saturday when it is located near the northwestern Bahamas. 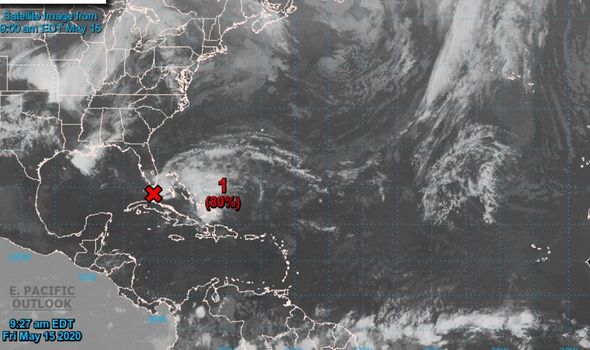 “It is likely that this low-pressure centre may become a tropical storm or a subtropical storm, by late tonight or Saturday, near the northwestern Bahamas.”

There is an 80 percent chance this forms into a named storm system, the NHC says.

And areas close to the system should prepare for heavy rain as the NHC warns: “Regardless of development, the disturbance will continue to bring heavy rainfall to portions of the Florida Keys, southeast Florida and the Bahamas through Saturday.”

The biggest impact the system which may develop into Arthur will have on the Northeast will see rough surf across mid-Atlantic coast next week.

The NHC said: “Dangerous surf conditions and rip currents are possible along portions of the southeast US coast this weekend and early next week.”

The second storm stalling in the East next week will also add to the rough surf and coastal flooding concerns beyond Arthur.

AccuWeather Senior Meteorologist Rob Miller said: “Before the downpours end later this weekend, there can be an AccuWeather Local StormMax of six inches (15 cm) in the Bahamas.

“Air squeezing between the budding storm and high pressure to the north will cause seas to start to build later this week at the Southeast beaches and around the Bahamas. 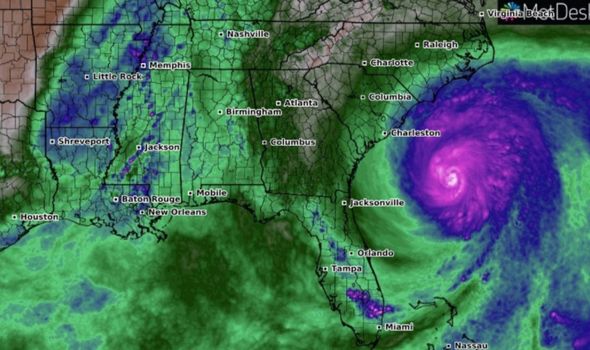 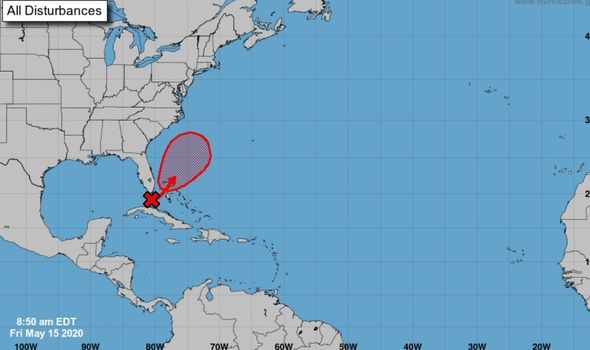 “Even higher surf may follow this weekend along the coast from Florida to the Outer Banks of North Carolina.”

If this system in the Atlantic does get named, it will be Arthur, however, it may classify more as sub-tropical.

CNN meteorologist Dave Hennen explained: “A subtropical storm is a hybrid between a regular area of low pressure, which has a cold-core, and pure tropical system which has a warm core.”

Atlantic hurricane season is a period of high activity for the Atlantic Ocean, and in 2019 was a record season.

Last year was a record fifth consecutive season for a storm to develop before the official start.

Hurricanes Dorian and Lorenzo became two of six Category 5 storms in four years, the others being Matthew, Irma and Maria, and Michael.

In total in 2019, there were six Atlantic hurricanes, of these three were regarded as major.

Hurricane season last year caused around $11.12 billion worth of damage and killed 107 people.