“Maximum sustained winds were 150 mph, with a minimum central pressure of 938 mb.

The NHC warned the hurricane could cause an an “unsurvivable storm surge”.

It said: “Unsurvivable storm surge with large and destructive waves will cause catastrophic damage from Sea Rim State Park, Texas, to Intracoastal City, Louisiana, including Calcasieu and Sabine Lakes. 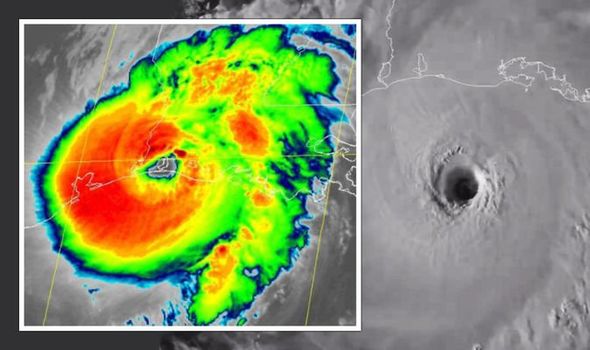 “This surge could penetrate up to 30 miles inland from the immediate coastline.”

There could be storm surges of more than 20ft (6m), the NHS said.

National Weather Service meteorologist Benjamin Schott said: “To think that there would be a wall of water over two storeys high coming on shore is very difficult for most to conceive, but that is what is going to happen.

“The word ‘unsurvivable’ is not one that we like to use, and it’s one that I’ve never used before.”

National Weather Service forecaster David Roth added: “This is one of the strongest storms to impact that section of coastline.

“We worry about that storm surge going so far inland there because it’s basically all marshland north to Interstate 10.

“There is little to stop the water.”

Half a million residents in the path of the storm have been told to evacuate.

He tweeted: “Hurricane Laura is a very dangerous and rapidly intensifying hurricane.

“Listen to local officials. We are with you!”