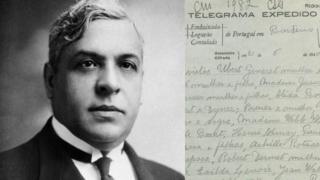 Eighty years ago, a middle-aged, mid-ranking diplomat sank into deep depression and watched his hair turn grey in days, as he saw the streets of Bordeaux filling with Jewish refugees fleeing the Nazis.

As Portugal’s consul in Bordeaux, Aristides de Sousa Mendes faced a moral dilemma. Should he obey government orders or listen to his own conscience and supply Jews with the visas that would allow them to escape from advancing German forces?

Sousa Mendes’ remarkable response means he is remembered as a hero by survivors and descendants of the thousands he helped to flee.

But his initiative also spelt the end of a diplomatic career under Portuguese dictator António de Oliveira Salazar, and the rest of his life was spent in penury.

Portugal finally granted official recognition to its disobedient diplomat on 9 June, and parliament decided a monument in the National Pantheon should bear his name.

It was mid-June 1940 and Hitler’s forces were days from completing victory over France. Paris fell on 14 June and an armistice was signed just over a week later.

Portugal’s diplomatic corps was under strict instruction from the right-wing Salazar dictatorship that visas should be issued to refugee Jews and stateless people only with express permission from Lisbon.

For those thronging Bordeaux’s streets hoping to cross into Spain and escape Nazi persecution there was no time to wait.

“We heard the French had surrendered and the Germans were on the move,” says Henri Dyner. He was three, but retains vivid memories of his Jewish family’s flight from their home in Antwerp, as Nazi Germany attacked Belgium and invaded France and the Netherlands.

“What I remember is the sound of the bombing, which must have woken me, and my mother telling me it was thunder.

“My parents turned on the radio and heard King Leopold telling Belgians we had been betrayed and attacked by the Germans. My father had been suspecting there could be a war since 1938. He had a plan, and a car,” Mr Dyner, now a retired engineer living in New York, told the BBC.

Eliezar Dyner, his wife Sprince and five other relatives, including a seven-month-old baby, drove away from the bombing and into France.

“My father avoided big roads, gave Paris a wide berth and stuck to the coast. He wanted to be only 10 miles ahead of the front all the time, because he thought it could be a quick war and why go too far when you might have to go back?”

After seeing German warplanes strafing French trenches and hearing the news of successive German victories, Henri’s father realised by the time they reached Bordeaux there would be no return to Antwerp any time soon.

In Bordeaux, the consul had struck up a friendship with a rabbi. Chaim Kruger had also fled the Nazi advance from his home in Belgium.

Consul Sousa Mendes offered the rabbi and his immediate family safe passage across the Spanish border, but then suffered a “moral crisis”, according to historian Mordecai Paldiel.

Kruger refused the offer, as he could not abandon the thousands of other Jewish refugees in Bordeaux.

In a letter dated 13 June 1940 Sousa Mendes wrote: “Here the situation is horrible, and I am in bed because of a strong nervous breakdown.”

“No-one really knows what went through his mind in those two or three days,” says Dr Paldiel, who ran the Righteous Among the Nations department at Israel’s Yad Vashem Holocaust memorial centre for 25 years.

“Some say the duty of a diplomat is to obey orders from above, even if those instructions are not moral.

“Later on, in Lisbon, Sousa Mendes told a rabbi this: ‘If so many Jews can suffer because of one Catholic, it’s all right for one Catholic to suffer for many Jews.’ He was talking about Hitler, of course.”

Whatever did go through the diplomat’s mind, Sousa Mendes emerged on Monday 17 June with a new determination.

According to his son, Pedro Nuno de Sousa Mendes, “he strode out of his bedroom, flung open the door to the chancellery, and announced in a loud voice: ‘From now on I’m giving everyone visas. There will be no more nationalities, races or religions’.”

For Henri Dyner and his family, this was a lifesaver.

By chance Henri’s mother knew the consul from his time in Antwerp, where she was a secretary at the British consulate.

The Dyner family had already tried and failed to obtain visas from US, British and Canadian authorities to leave France. Before his breakdown, Sousa Mendes had put them on a list in a request sent to the Salazar government.

“My mother recalls that he disappeared for a couple of days, and when he came out, his hair had gone grey,” says Henri Dyner, who remembers queues of refugees outside the consulate in Bordeaux and camping in squares.

“My mother actually began to work for Sousa Mendes those days, helping with this kind of production line of visas all down a long table. Sousa Mendes saved our lives.”

No-one knows for sure how many transit visas were issued, allowing refugees to pass from France into Spain and travel onward to Portugal. But estimates range between 10,000 and 30,000, and most sought to cross the Atlantic to a variety of American destinations.

The US-based Sousa Mendes Foundation has identified some 3,800 recipients of these visas.

As if possessed with a sense of mission, the consul even signed visas on the road as crowds in Bordeaux began to form a human column southward towards the border town of Hendaye. He stopped at the consulate in Bayonne to issue more papers.

The foreign ministry in Lisbon began sending cablegrams to Bordeaux, ordering him to desist, amid reports from colleagues that he had “lost his senses”.

Spanish authorities declared his visas invalid, but thousands had already made it across the Bidasoa river into Spain’s Basque region.

Eventually, Sousa Mendes reported to his bosses in Lisbon on 8 July.

Among those who escaped occupied France thanks to his visas were surrealist artist Salvador Dalí, filmmaker King Vidor, members of the Rothschild banking family and the majority of Belgium’s future government-in-exile.

Salazar’s Portugal would later be praised for its role in allowing refugees to escape from Nazi occupation and repression, but Sousa Mendes was expelled from the diplomatic corps and left without a pension.

His family home in Cabanas de Viriato fell into ruin, and remains so today.

“Sousa Mendes was mistreated by Salazar. He died in misery as a pauper, and his children emigrated to try to find a future somewhere else,” says Henri Dyner.

Henri’s family ended up in Brazil, before he moved to the US for professional reasons. But he remembers a man who had courage in his convictions.

“The way things are in the world today, we need more people prepared to stand up for what is right and take a stand.”

Who was Aristides de Sousa Mendes?