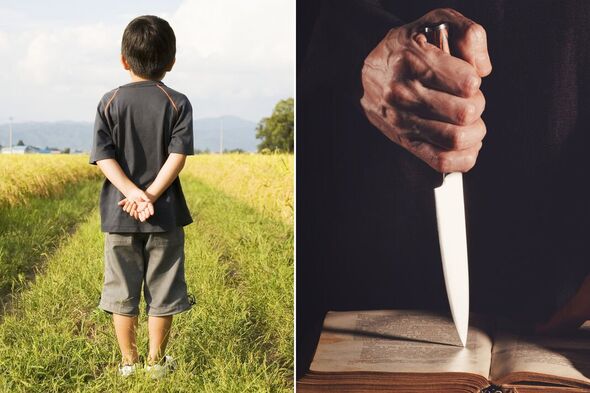 Deranged cultists have kidnapped and decapitated a small boy in a human sacrifice ritual to make them “rich”, police say. Officers were horrified to find the dismembered body of a nine-year-old who they believe was killed as part of a bizarre tribute by his attackers seeking a reward from evil forces.

The Hindu reports the young child belonged to a tribal community from Sayli village, near Vapi, in the Gujuart state, and went missing on December 29 before being reported to officers the next day at Silvassa police station.

The gruesome discovery of the decapitated remains of the boy was made at the Damanganga canal near Vapi, around 20 miles from his village. Police have arrested two men, and also detained a teenage boy.

Detectives told the Hindu that the child underwent a forensic examination along with weapons thought to have been used in the ritual that saw him murdered. Police said they understood the purpose of the inhuman act was to make the cultists “rich”.

A team of 100 police personnel was formed and assigned different tasks to crack the case after the headless body was found at Vapi, police said.

Teams of police personnel from Daman and home guards analysed CCTV footages, and questioned residents in the village besides shopkeepers and industrial workers to gather leads. Mobile call records were analysed and areas near the village and the canal were searched.

The police said in a statement: “The investigation led the police to a juvenile. He revealed he had kidnapped the victim on December 29, 2022, from Sayli village and murdered him as a human sacrifice with the help of his accomplice.”

The Hindu said the BJP Scheduled Tribe (ST) Morcha in the UT has submitted a memorandum to the Superintendent of Police, seeking strict punishment for the accused persons.

The memo said: “The deceased child belonged to the tribal Warli community. His family has no enmity with anyone. It is learnt that the innocent child was sacrificed by some culprit and a tantrik.”