HONG KONG (Reuters) – Hong Kong’s legislature plunged into chaotic scuffles for a second time this month, as pro-Beijing lawmakers on Monday took control of a key committee, paving the way for a debate on a bill that would criminalise abuse of China’s national anthem.

Pro-democracy legislators charged at security guards surrounding pro-establishment lawmaker Chan Kin-Por, who had taken the chairman’s seat in the meeting against procedural objections by the opposition.

Guards hauled several legislators out of the chamber, some kicking and shouting. Some tried leaping over the guards from benchtops to take back the chairman’s seat only to be forced back. The Democrats chanted “foul play” and held a placard reading “CCP (China Communist Party) tramples HK legislature.”

Opposition lawmaker Ted Hui shouted at Chan that the meeting was “illegal.” Even as the protests continued, Chan called a vote for a chairperson of the committee that was won by pro-Beijing lawmaker Starry Lee.

Lee’s camp condemned the violence and pledged to push ahead with the anthem bill.

“It’s painful to watch and it’s saddening to see a legislative assembly degenerate into this level of behaviour,” pro-Beijing lawmaker Martin Liao said.

Beijing has accused the former British colony’s pro-democracy lawmakers of “malicious” filibustering to prevent some proposed bills from going to a final vote, effectively paralysing the legislature.

It was the second time in 10 days that have legislators pushed and shoved each other over the procedures of electing a chairperson.

Last May, scuffles broke out in the legislature over a proposed extradition bill that if passed could have seen people stand trial in courts in mainland China. The bill sparked often-violent protests in the Hong Kong and was later scrapped.

“They can take away the rules of procedures today but I am sure the Hong Kong people won’t forget today,” said Democratic lawmaker Dennis Kwok. 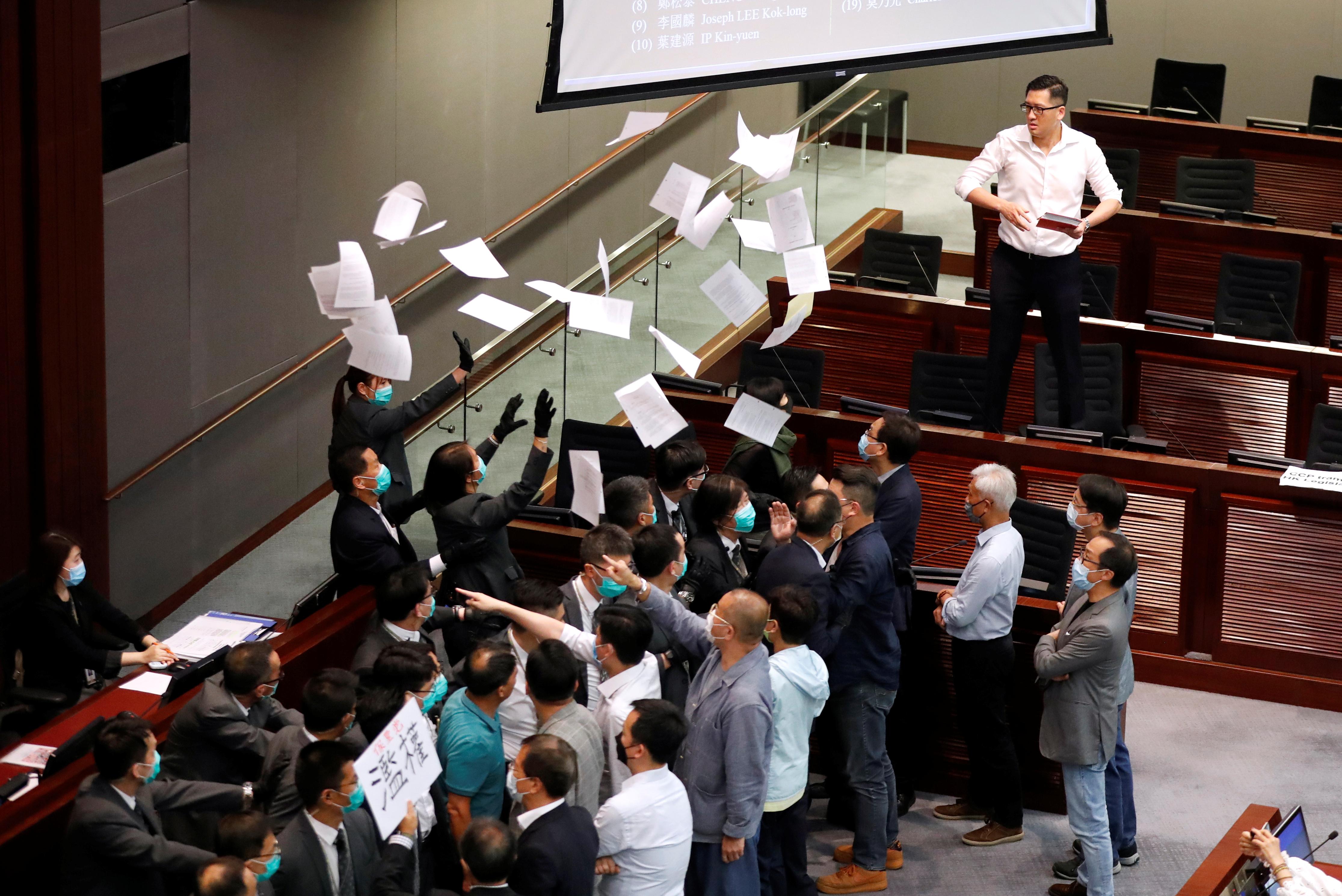 The house committee’s role is to scrutinise bills before a second reading in the legislative council and has built up a backlog after failing to elect a chairperson since late last year. The backlog includes the China national anthem bill, which is expected to be given a second reading on May 27 despite the procedural chaos.

Protesters have been calling on social media for city-wide demonstrations on that day.

“We cannot shun our legislative duty because we think there’s a risk,” he said.

Social distancing amid the pandemic has largely put a brake on protests since January, but demonstrations are expected to resume later this year with the outbreak coming under control.

The arrest of 15 activists in April, including veteran politicians, a publishing tycoon and senior barristers, thrust the protest movement back into the spotlight and drew condemnation from Washington and international rights groups.

China’s Hong Kong affairs office warned this month that the city would never be calm unless “black-clad violent protesters” were all removed, describing them as a “political virus” that seeks independence from Beijing.

Beijing blames foreign forces for fomenting unrest and says protesters are undermining the rule of law in Hong Kong.

U.S. Secretary of State Mike Pompeo said on Sunday he believed China had threatened to interfere with the work of U.S. journalists in Hong Kong, and warned Beijing that any decision impinging on Hong Kong’s autonomy could affect the U.S. assessment of Hong Kong’s status. 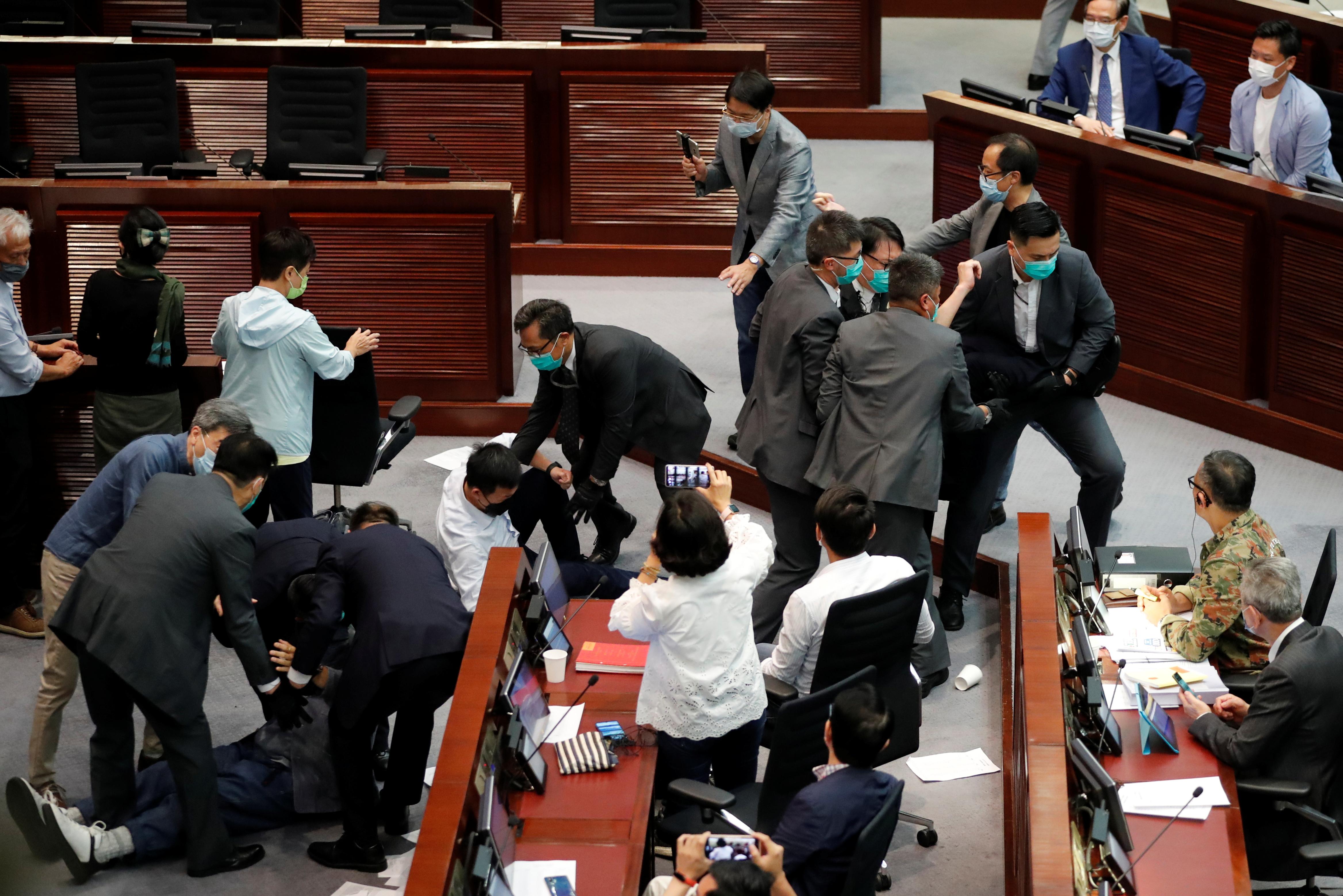 Britain returned Hong Kong to China in 1997, and the territory was promised a “high degree of autonomy” for 50 years.

The “one country, two systems” deal formed the basis of the territory’s special status under U.S. law, which has helped it thrive as a world financial centre.