Philippine president seen as having firm grip on power but faces unprecedented criticism over COVID-19 response. 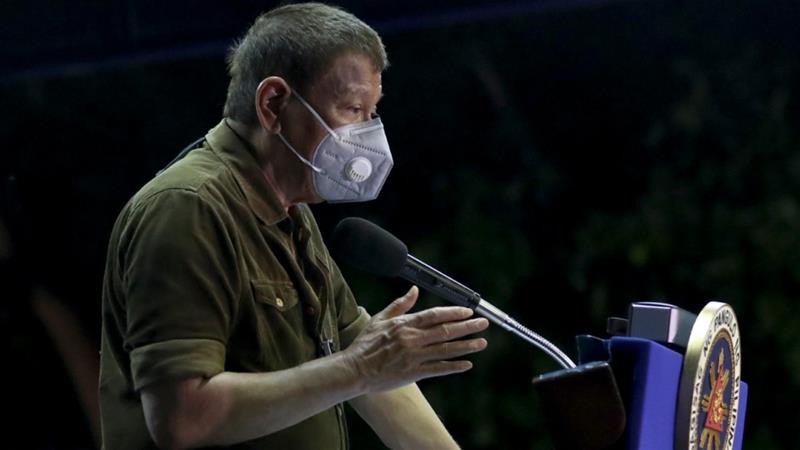 President Rodrigo Duterte is set to deliver on Monday his annual address to the Philippines, having consolidated his power with a firm grip over Congress and a majority in the Supreme Court, but under mounting pressure over his handling of the coronavirus pandemic.

With 23 months left of his six-year term, Duterte has been thrust into a national emergency.

Analysts say he is trying to make up for his lack of a clear policy to address the health and economic crisis caused by the pandemic, by resorting to the same law-enforcement approach he wielded with deadly consequences in his war on drugs.

But this time, the “enemy” remains unseen, afflicting more than 80,000 people and leaving almost 2,000 dead as of Sunday. Unemployment has surged to 17.5 percent and the country of 100 million could be facing its worst recession in 35 years.

“This is, I think, one of the most important state of the nation addresses of any Filipino president, mainly because this is not only an economic crisis, this is a crisis that can potentially change the way we live,” said Jean Encinas Franco, a political science associate professor at the University of the Philippines.

“We need to hear the real state of the nation, and how he will move this nation forward in the aftermath of the pandemic,” Franco told Al Jazeera.

Duterte is due to start delivering his address at 4pm local time (08:00 GMT) in an event scaled back to just 50 people as a result of the coronavirus.

Philippine Vice President Leni Robredo, who is a member of the opposition, says Filipinos want to hear from the president on his “real plan” to address the pandemic.

“We have long been asking questions because what we’ve learned from their weekly meetings appears incomplete. Hopefully tomorrow, it will be presented completely,” Robredo said during her weekly radio show. The president and the vice president are elected separately in the Philippines.

Earlier, Harry Roque, the president’s spokesman, had promised that Duterte will present a detailed roadmap for recovery, including how to contain the spread of the coronavirus disease, also known as COVID-10.

There have also been reports that Duterte could declare another expanded lockdown if the number of cases hits 85,000 by the end of this week.

On Monday, Presidential Communications Secretary Andanar added that the president’s speech “will be one that is full of optimism and hope.” He added that the government “has done enough within its means”.

At the outset of the pandemic, Duterte was quoted during a cabinet meeting as threatening to “slap” the coronavirus in the event that he sees it. Recently, he was also quoted as saying that face masks can be reused by using gasoline as a disinfectant.

“He wants to appear as tough,” Franco said. “But he cannot really admit that this is not something that he was not prepared for. He can’t bring himself to admit it.”

While many other countries were also left grappling with the aftermath of the pandemic, it is apparent that Duterte “botched” his response, Franco added.

The delay in implementing an early ban on flights from China was one obvious example of the president’s half-hearted approach to contain the virus, she said.

Franco said that a recent survey, which showed that more than 80 percent of Filipino respondents were worried about their situation amid the pandemic, was a reflection of the Duterte administration’s shortcomings.

Nonetheless, the growing frustration among the public towards the president has not dampened his efforts to carry out his political agenda.

Earlier this month, Duterte signed into law new anti-terrorism legislation, which seeks to expand police powers for warrantless arrests and prolonged detentions against those suspected of “terror” activities.

Legal experts and activists have warned that the new law could be used to target dissent. Several groups have petitioned the Supreme Court to invalidate the new law.

At the same time, the Duterte administration also successfully shut down the country’s largest TV network, ABS-CBN. It has also pushed for the prosecution of prominent journalist Maria Ressa, head of the independent news website Rappler, which has been reporting about the president’s war on drugs. 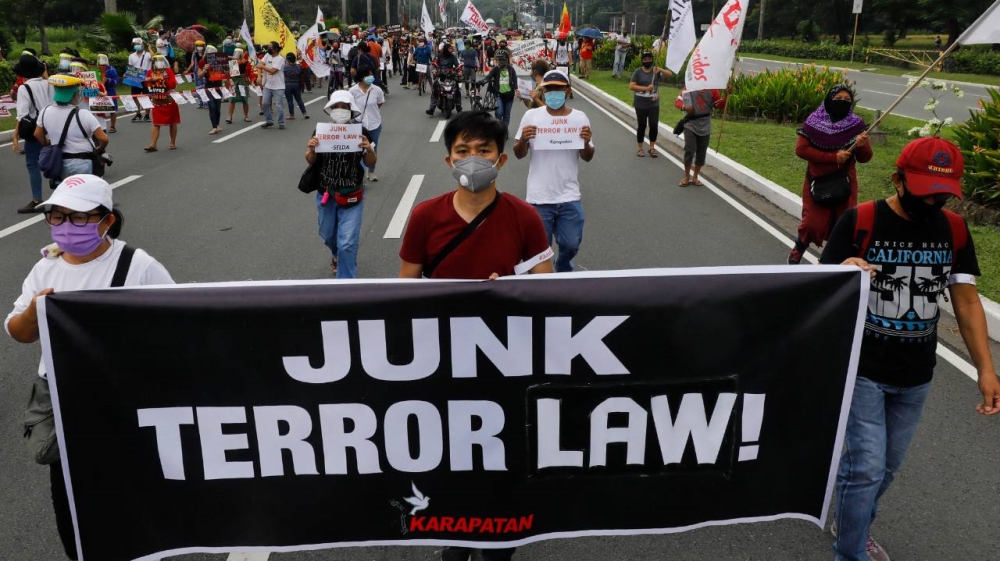 Now, the administration has turned its attention to the president’s long-standing plan to change the constitution, paving the way for the lifting of term limits of politicians allied with Duterte. It could also possibly allow Duterte to run for another term, which is prohibited in the current constitution.

In a statement sent to Al Jazeera, Cristina Palabay, secretary general of the activist group Karapatan (Rights), has warned against the plan to change the charter, saying it only serves the “militarist” and “oligarchic” interests of the president and his allies.

Palabay and her group have vowed to protest “online and on-ground” on Monday amid threats of possible arrests, after police warnings against mass gatherings because of the pandemic restrictions.

Franco, however, has some doubts that Duterte and his allies will be able to change the 1987 constitution before their terms expire in June 2022.

Not only is the plan “tone-deaf”, as it is being pushed in the middle of the pandemic, she said, but the president is also running out of time to get it through Congress, despite his supermajority.

“If you look at the charter change proposals in the past,” Franco said, “when it is nearing the end of the term of the president, it really loses its appeal.”