ATHENS (Reuters) – Greeks flocked to the seaside on Saturday when more than 500 beaches reopened, as the country sought to walk the fine line between protecting people from COVID-19 while reviving the tourism sector that many depend on for their livelihoods.

For many in Greece, it was a first foray into a big public venue since the country began easing its lockdown earlier this month, and it also coincided with the first heatwave of the year.

Sun-seekers were required to respect distancing rules, which even stipulated how far umbrellas must be kept apart.

No more than 40 people were allowed per 1,000 square metres (10,750 sq ft), while umbrella poles had to be four metres (13 ft) apart, with canopies no closer than one metre, according to a government-issued manual, complete with diagram.

At Alimos, a popular beach just south of Athens, people queued up from the early morning to nab their spot in the sunshine.

“This is the best thing for us elderly … to come and relax a bit after being locked in,” Yannis Tentomas, who is in his 70s, said as he settled down under an umbrella.

He said he was complying with distancing rules, adding: “It’s like a gun to the head.”

The manager of the beach, Nikos Venieris, said visitors were following the rules so far and he hoped they would continue to do so during the summer.

“We’re travelling an unknown road, and we don’t know where it’s going to end up,” he added. 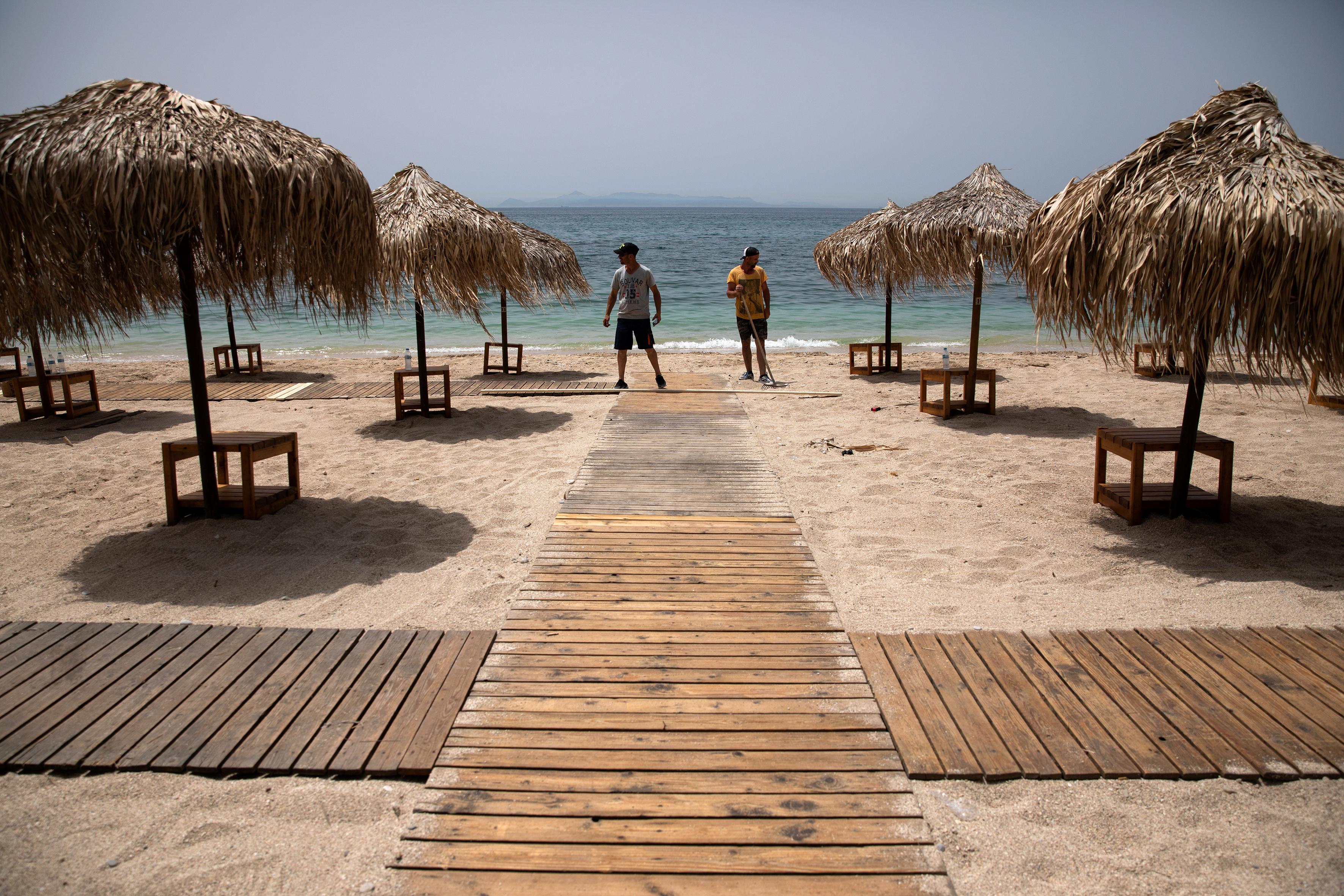 At a neighbouring beach a drone buzzed over sun-loungers, with loudspeakers urging people to keep safe distances from each other.

The lifting of the lockdown comes as countries around Europe and the world look to ease restrictions imposed to curb the pandemic, in an attempt to resurrect their economies.

Greece has reported a fraction of the COVID-19 cases of neighbouring countries – more than 2,800 infections with 160 deaths. From May 4, it began a phased-in easing of the lockdown that had been in place since mid-March.

The country of 11 million people is one of the most dependent in Europe on tourism, which generates about a fifth of its economic output.

Following the reopening of Greek beaches, people will be permitted to attend Church Mass from May 17, while archaeological sites, including the Acropolis, will reopen for visitors on May 18. From Monday, travel across mainland Greece and to Crete will be allowed, and from May 25 to the islands.

“This is a crucial turning point in our efforts and we must succeed,” said Nikos Hardalias, Greece’s civil protection minister.

Tourism officials say they hope to welcome back foreign holidaymakers in July.

“The message is that Greece is a very safe and hospitable country. We invite them and are waiting for them to come, as long as they follow the rules,” Alimos Mayor Andreas Kondylis said. 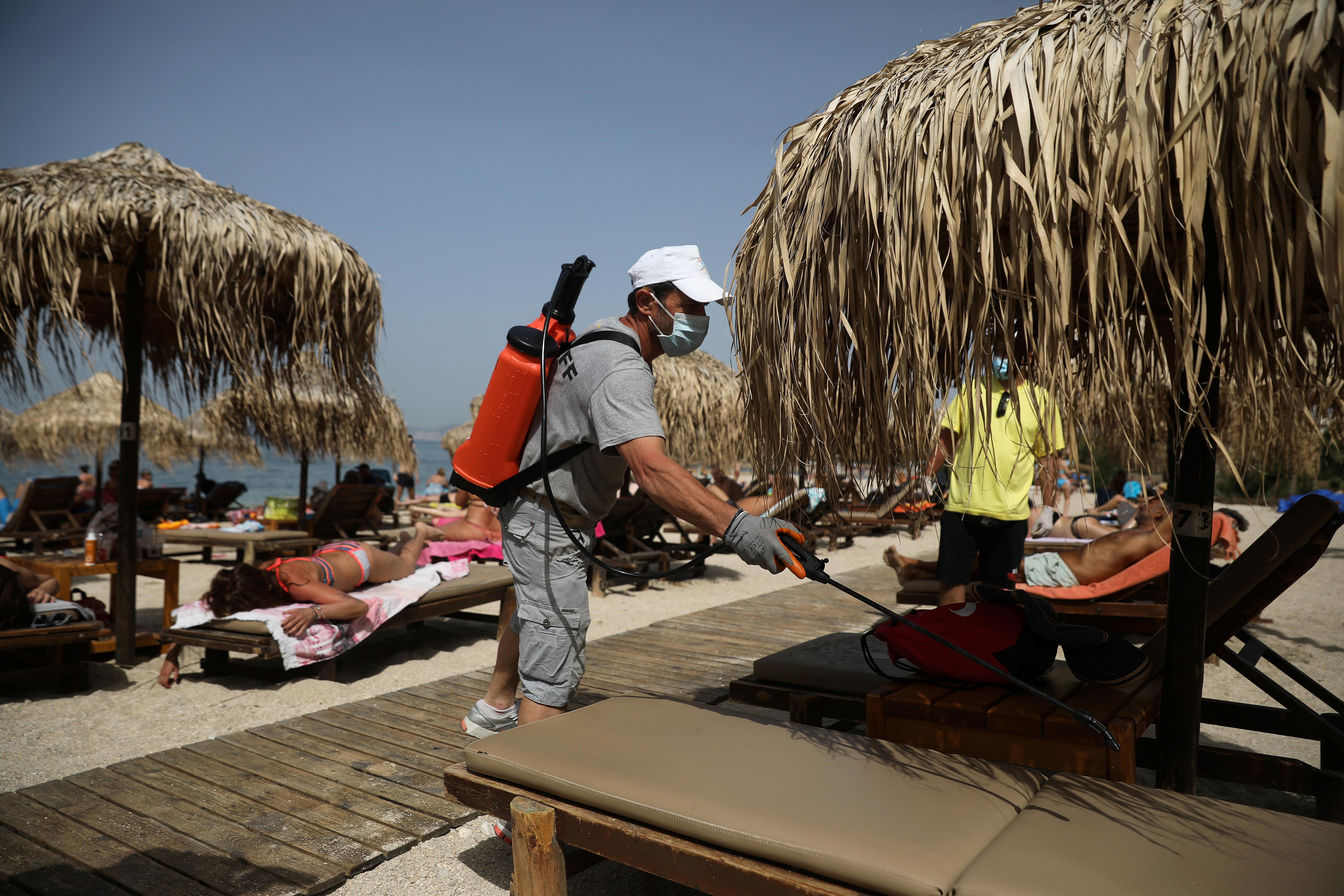 Greece’s lockdown, plus the shutdown of much of the world, and most air travel, is likely to have a profound effect on a country only just starting to recover from a decade of financial turmoil and austerity.

Authorities expect anything between a 5% and 10% decline in economic output this year, before recovering in 2021.