Chanting ‘freedom’, the former inhabitants of burned Moria camp protest against plan to be moved to another facility. 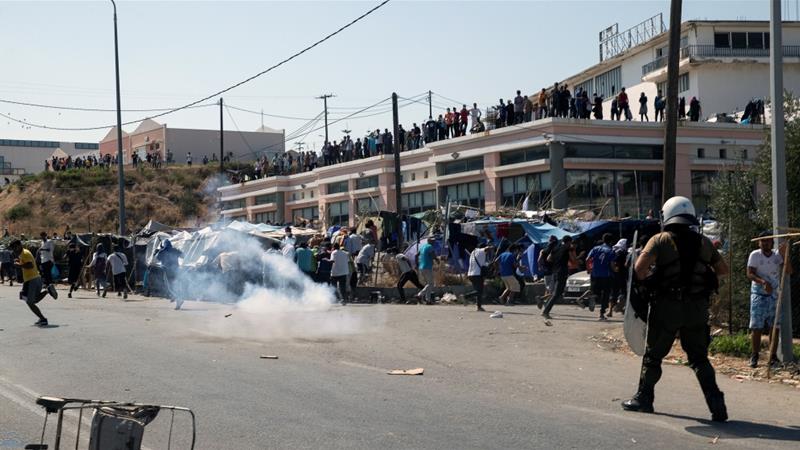 Greek police have fired tear gas during a protest by refugees and migrants demanding to leave the island of Lesbos after being left homeless by a blaze at Europe’s largest refugee camp.

Under a hot sun on Saturday, the protesters on Saturday chanted “Freedom” and “No Camp” as authorities stepped up efforts to set up temporary accommodation for them on another part of Lesbos.

More than 12,000 people have been sleeping rough since Wednesday when flames swept through the notoriously overcrowded Moria camp. With Moria gutted, Saturday morning found men, women and children sleeping under improvised shelters made of reed stalks, blankets and salvaged tents.

Some protesters carried handwritten signs with messages including “We don’t want to go to a hell like Moria again” and “Can you hear us Mrs Merkel?” in an appeal to the German chancellor.

Police fired rounds of tear gas when some of the protesters attempted to march down a road leading to the island’s main town of Mytilene, which police had blocked while work on the new tent settlement continued nearby. The confrontation was short-lived. 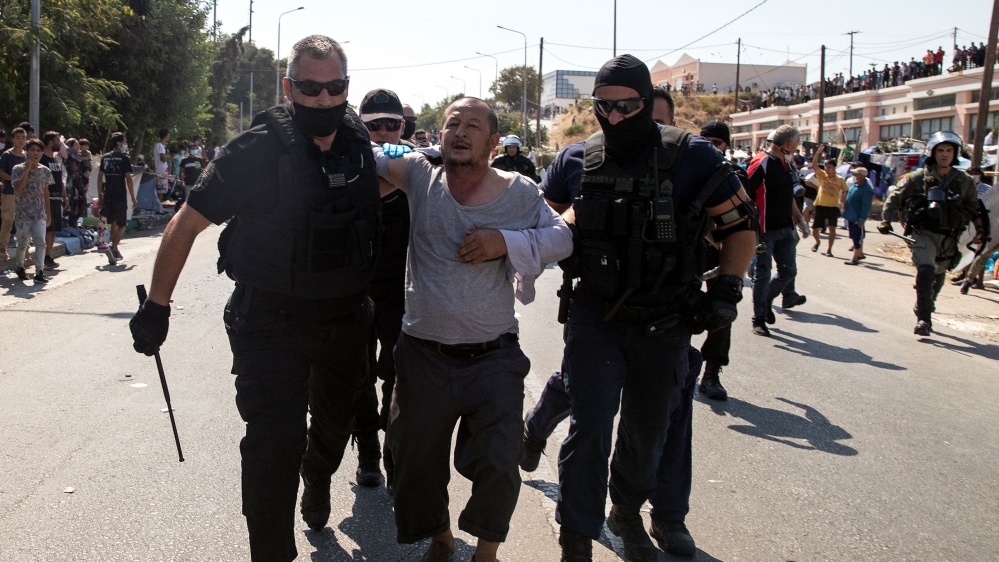 Al Jazeera’s John Psaropoulos, reporting from a tent city that had sprung up on the side of a highway on Lesbos, said the former Moria camp residents were adamant “that they are not interested in going to yet another camp situation”.

“They all say they want to move to mainland Greece and the rest of Europe; they are tired of living in temporary housing, in makeshift huts underneath tarpaulin.”

Leaving the island would require bending European Union rules, under which asylum seekers reaching Greece’s islands from Turkey must stay there until they are either granted refugee status or deported back to Turkey.  Authorities have said none of the camp’s residents – except for 406 unaccompanied teenagers and children – would be allowed to leave the island. The unaccompanied minors were flown to the Greek mainland on Wednesday, and several European countries have said they will take some of them in.

Other countries have pledged assistance for the new camp under construction in Lesbos, a move neither residents nor the former inhabitants of Moria want.

“All around us, we are hearing babies crying, hungry,” said Psaropoulos. “We are seeing children who are bored playing on the street with sticks or whatever they can find; we are seeing very frustrated adults, very tired-looking individuals disillusioned with the process of asylum which has seemed to be unable to deliver timely decisions,” he added.

“Some people have been here for two years, they are tired of waiting.”

The fire at the camp, which was holding four times the number of people it was supposed to, has returned the spotlight to the migration crisis facing the EU, which has struggled to find a response that goes beyond temporary fixes.

Greek authorities have refused any mass transfer from the island, located a few miles off the Turkish coast, despite growing hostility from residents, angry after years of bearing the brunt of the crisis.

But officials said they were determined to provide shelter and proper sanitation and prevent a humanitarian catastrophe.

“As of today, asylum seekers will start coming into the tents, into safe conditions,” Migration Minister Notis Mitarachi told reporters at the site.

The need to bring the situation under control has been made more urgent by the fact that authorities have lost track of 35 camp residents who had tested positive for coronavirus earlier this week.

Health authorities have promised to conduct rapid tests at the entrance of the new camp, with a quarantine unit ready for anyone testing positive.

On Friday, 200,000 rapid-detection kits for the virus were flown to the island for an extensive testing drive that would include asylum seekers and islanders.

The World Health Organization said Greece had asked for the deployment of an emergency medical team. Two such teams, one from Belgium and one from Norway, were expected to arrive on Saturday and Monday.

Still, the unsanitary conditions being endured by Moria’s former inhabitants in the fields and streets of Lesbos has caused deep alarm.

“This is a health bomb. These people haven’t even had access to water all these days, they cannot even wash their hands,” Matina Pagoni, president of Athens and Piraeus hospital doctors’ union, told Skai television.

Many of the asylum seekers in Moria described life there as being worse than much of what they had endured on their long, often painful journeys towards what they hoped was a better life in Europe.

Human Rights Watch said the Moria fires “highlight the failure of the European Union’s ‘hotspot approach’ … which has led to the containment of thousands of people on the Greek islands”.

“European leaders should share responsibility for the reception and support of asylum seekers. Also, Greek authorities should ensure that respect for human rights is at the centre of its response to this fire,” the rights group’s Eva Cosse said in a statement.