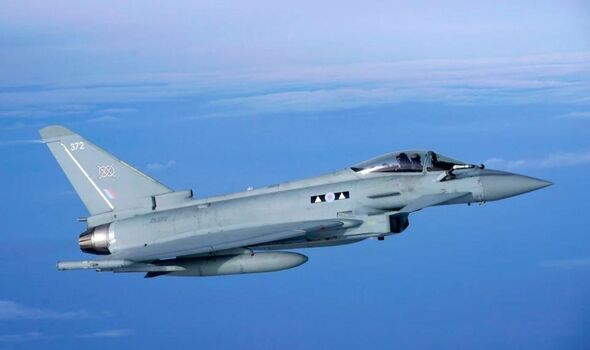 Germany has rebuffed British-backed Eurofighter jets in favour of a €10 billion deal for US-made 4-35 aircraft. It comes as the country looks to order a fleet capable of carrying a nuclear arsenal.

It will be seen as a blow for the Eurofighter Typhoon, manufactured by British BAE systems in partnership with Airbus and Italian company Leonardo.

The German Parliament’s budget committee agreed to the F-35 deal on Wednesday as part of a broader €100 billion package of defence spending, as promised by Chancellor Olaf Scholz in the wake of the Ukrainian invasion by Russia.

Three of the options prior to the government’s decision were the new F-35s, made by Lockheed Martin, the F/A-18, made by Boeing and the Eurofighter.

Certifying the Typhoon to carry the 20 B-61 nuclear gravity bombs it houses is part of its commitment to NATO would be unfeasible given the time restraint.

It will buy the larger, F-35A variant of the warplane which is designed to be flown from airfields.

The UK operates the B variant of the craft from its two Queen Elizabeth II class aircraft carriers, which are capable of short takeoff and vertical landing.

Berlin announced its intention to make the choice earlier this year, but it required parliamentary approval.

“The German F-35 programme will ensure Germany’s continued commitment to the Alliance and guarantee NATO’s credible deterrence in the future,” the US embassy said.

The first aircraft are expected to enter service in 2028.

“The U.S.-German defense relationship has never been stronger and is a key pillar of NATO’s transatlantic partnership,” the embassy said.

“Considering current security challenges, including Russia’s war in Ukraine, close collaboration between Allies is more critical than ever,” the US embassy said.

The issue of replacing its ageing fleet of Tornado fighters, dating from the 1980s and 1990s, has long occupied German politics. The country has a fleet of 93 aircraft, some of them obsolete.

Various French diplomats have retorted to the decision, some going as far to call the Franco-German alliance a “decoy”.

“Another proof that the Franco-German couple is a decoy and that the European Union which is supposed to be a counterweight to the USA or China is also a decoy!”