The Hamburg frigate departs from Germany’s Wilhelmshaven on a five-month mission to enforce a UN arms embargo. 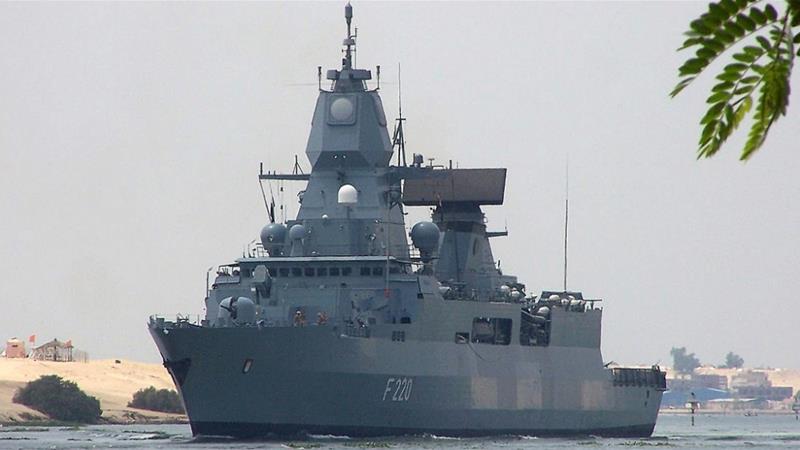 A German frigate carrying 250 soldiers has departed at the start of a five-month mission as part of the European Union efforts to enforce a United Nations embargo on the flow of weapons into war-torn Libya.

The Hamburg frigate set sail for the Mediterranean from the port city of Wilhelmshaven on Tuesday.

The EU’s Irini mission, launched in May, is tasked with preventing the flow of weapons into Libya as well as gathering information on illegal oil exports from the country and disrupting people smuggling in the region.

Satellites and planes are also being used to monitor the arms embargo.

The Hamburg’s crew members are set to return on December 20 and may not see any days on land until then, due to precautions regarding the coronavirus pandemic.

“We are facing a mission that will present the ship and crew with previously unknown challenges in several respects,” Commander Jan Fitschen said at the start of the mission.

It is taking place on “difficult political and operational terrain”, he said.

Countries accused of violating the embargo include Turkey, Russia and the United Arab Emirates (UAE).

Libya has been engulfed by civil war since the overthrow of longtime leader Muammar Gaddafi in 2011, with the conflict increasingly turning into a proxy war.

Turkey supports the government of Prime Minister Fayez Serraj, which is vying for power with renegade military commander Khalifa Haftar, who is backed by several militias.

Egypt, Russia and the UAE are on Haftar’s side.

Ankara, in turn, accuses the UAE of supplying Haftar with weapons, and argues that the EU’s Operation Irini disproportionately targets Serraj.

International attempts of mediation have so far proved unsuccessful, including the latest Libya summit held in Berlin in January.

Recently, Germany, France and Italy for the first time threatened sanctions to enforce the UN arms embargo, which has been in place for nine years with repeated violations.